A Lotta White and Green

Most of the white's outside my window, as the snow's been falling steadily since about 6 a.m. -- sometimes heavily, sometimes lightly, but constant.  I cancelled my Usual Monday in Lacombe and stayed home to sew.

I began with the sampler on which I'm working for my friends' 40th wedding anniversary this spring.  They aren't big Internet users and don't read my blog, but to be safe I'll show you only a wee glimpse:

To get this finished on time, I need to stitch two pattern rows a week from now till April.  The fishies you see are the first of this week's two rows!  :-)  My challenge with these samplers is to translate the count on the chart to the linen.  Even 'even-weave' has it's lumps and bumps, and so sometimes I'm a thread out -- and that can add up.  I've become a master at fudging!  When it comes to the natural world (leaves, grasses, wildlife), I figure they're all a bit different anyway...and so far, so good!

This took up a good chunk of my morning today. After a lunch of home-made veggie soup and whole wheat-rye bread, I decided to finish off the last two "A" blocks for Easy Street.  That done, I laid out a "B" block to see what it looks like. 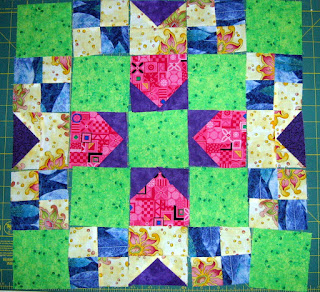 Whoa!
I'm hoping things balance out once I start to put them together into the top!

To rest my eyes (!) I decided to audtion fabrics and a layout for a new piece, based on a photo I took a couple of years ago down at Northbow Lodge, while I was there on a quilting retreat.  (Note: it's a fly-fishing haven in the summer, and a quilter's delight in the 'off season'.  Home-made quilts on every bed, terrific food and scenery to die for.  If you ever get a chance to visit, DO!) 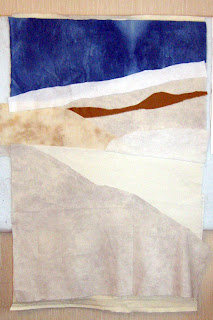 Fabric audition includes hand-dyed fabric (sky), batting (very white snow areas), and commercial fabrics, all used on the "wrong" side.  The stark line from centre left down to bottom right indicates where the fence and power poles will be applied.  There'll be a lot of hand embroidery and thread painting before this one is the way I'll want it...and I want it as part of the Lacombe show and sale in mid-April; hence starting now.  Estimated finished size: about 20" wide x 30" long.

Your new projects all look great!