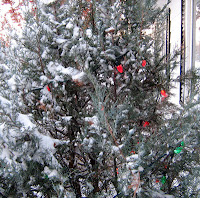 I may have mentioned a while ago that my children have decided not to give gifts for Christmas this year.  They didn't want me or their Auntie W to, either.  "Just stocking stuffers", they said.  Well. "Bah!  Humbug!" to you too.   ;-)  Actually, I think they're both saving up to make their travel dreams come true, and they don't want to spend money elsewhere.  And no, they didn't want us to give them money, either; they know both of us have travel dreams, too.  I can understand that -- I think.

Years ago my DH and I told my parents we didn't want to exchange gifts; in reality, we could afford 'big' gifts for only our children, and "just stocking stuffers" for everyone else (my folks and my sister; his family's Jewish and didn't celebrate Christmas.)  My mother replied that that was all very well, but we were her kids and so she would continue to give us gifts, regardless.  Now, with my own children's announcement,  I understand what she must have felt, and why she continued to give us Christmas presents.  (Eventually we could afford to go back to the full tradition, which always felt better somehow.)

I like to give gifts, especially to my children, and even more, I like to make or find that certain something that will hopefully bring a smile of delight and appreciation.  My husband was particularly good at this -- paying attention to something said in passing, something admired in a magazine or shop window -- acquiring it and tucking it away for that special time (Christmas, anniversary or birthday) when it could be presented to a surprised recipient.  He was like a little kid at Christmas -- a holiday he never celebrated until our becoming a couple in 1974, the Christmas before we married -- and he never failed to get a kick out of the reactions of others to his thoughtful gifts.

There was -- early on -- one "disaster", and it occurred "BK" (Before Kids): the Year of the Humidifier.   DH learned that necessities (irons, vacuum cleaners, portable fans...) do not make ideal gifts at any time, even if the intended recipient has mentioned the need for them!  :-)

And then there was, much later, one of DH's most thoughtful and creative Christmas gifts.  It was 1993, I think, or 1994.  I'd gone to work for a small firm with Important Clients.  I'd also spent some time seriously losing weight.  My working wardrobe called for suits, stockings and heels, and my suits were now looking shabby and hung on my slimmer frame.  I needed a wardrobe overhaul, but being the main income-earner in the family, could not see my way clear to stretching the budget to do so -- and my garment sewing skills weren't up to the task, even if I had the time (which I didn't).

By then, my parents were giving us cheques for Christmas; each year I looked forward to buying a bit of something glitzy to accent my wardrobe.  That year, I'd been to a Fifth Avenue jewellry party and had the hostess set aside a brooch-and-earrings set for me, knowing my mother's cheque would more than cover the cost.

I called the Fifth Avenue representative and cancelled my order.

I wondered what on earth was happening, but didn't dare mention anything to Mom and Dad.  They'd sent money for us to buy gifts for their grandchildren, but...

All the gifts were opened...and then...DH gave me an envelope.  I still have it somewhere in my memorabilia, I think.  The message inside was something to the effect that, knowing my needs for a new wardrobe, DH had contacted my parents, my aunt, my sister and my cousins (who usually gave me money at Christmas), and each of them -- and DH -- had contributed to a gift certificate for my favourite women's shoppe!

And then DH gave me a small gift-wrapped box.

You guessed it.  He'd called the Fifth Avenue rep and bought the brooch and earrings...

I still choke up when I remember the work and thought and creativity and love that went into that very special Christmas gift.

Such a sweet memory

I always like to give a little gift at Christmas to my friends in appreciation of them being in my life :-)