Years ago, when my husband lost his left leg to Type I Diabetes, he could no longer drive a standard shift car.  The last car he owned was a second-hand, caramel-coloured 1988 Bonneville I dubbed -- only slightly affectionately -- "The Tank".  When he lost his right leg too, he drove her with hand controls.  When he died, I gave her to my son, who drove her till her transmission died, and then donated it to the Kidney Foundation, where she gave her last service to humanity to raise funds from what few functioning parts she had left.

I drove her very little, because even with the electronically-raised seat, I could barely see over the dashboard (I'm 5'2") and never knew where her front and back ends were in relation to vehicles around me.

Since my Howard's long illness, I've had real trouble with trust in God -- trust He loves me, is with me and is providing for me.  Lovely things happened on the weekend after I prayed that He would show me that His promises are real, for me as much as for anyone else.

Enter Mick and the boys and their song (above)...

Before I left for the weekend, I had booked to take my sweet little red Toyota Echo in for it's long-needed repairs.  (It was backed into while parked at the curb beside my church back in September.)  I was very clear with the body shop and with the car rental company (arranged for by the insurance company and the body shop) that I wanted a small (read: 'compact' or 'sub-compact') car for the nine or ten days it's going to take for the 'surgery' on my Echo.  I knew a standard shift was too much to ask, but they assured me they could provide 'small'.

Here was their idea of 'small': 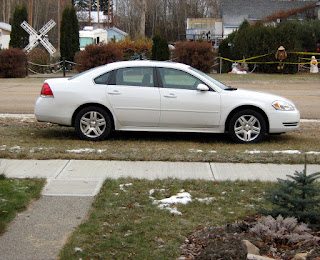 I was terrified, and I'm afraid I let the rental agent who brought it and the body shop owner know my displeasure in no uncertain terms.  (I don't swear, but I can do a very fierce Seriously Annoyed Person voice.)

When I drove it back to the church -- where I spend most of every Monday afternoon -- my priest gave me a hug and then she and I spent some time praying.  My fears were allayed -- but only slightly.  We asked God to please arrange a smaller vehicle ASAP -- if He were willing.

There was one possibility.  After the rental agent left me with the car, I popped the trunk.  In it I found a lovely tote bag, clearly left by the previous renter.  In it, there were three unopened bottles of wine!!  I left the package with the body shop owner, who said he would have the company pick it up -- perhaps later that day, and perhaps with a smaller car.

I stayed on at the church through music practice, and carefully drove home in the dark (the Impala's high beams are not as high or as far-reaching as my Echo's).  I parked it in the green space in front of my house, not taking the risk of backing it out of my driveway -- and into my neighbour's back fence.  It wouldn't fit in my garage, anyway.  Well, it would, but there'd be no room on either side to open the doors.

I called the body shop and apologized for my temper which, I explained, had been triggered by a measure of fatigue (normal after a Cursillo), and sheer terror.

This morning in my prayer time I promised God I wouldn't complain any more, but would make do with this car and pray for His constant protection for me and those around me whenever I drove it.

And then, the miracle.

As I was crafting this post, the rental agency called and told me they have a Ford Fiesta and are driving it out to my home within the hour.  Roughly speaking, I can expect it to be between 154" and 174" long, and 66" to 68" wide, depending on the model -- a bit shorter and wider than my Echo.

I was so thankful, I gushed at the agent over the phone, and then called my priest to let her know, and we both gave prayers of thanks then and there.  Clearly God's operating principal is similar to that of the Stones:

You can't always get what you want,
But if you [pray] sometime, you just might find
You get [the grace] you need.

Jehovah Detailus-the God of Detail. Yeah, I just made that up, but that's what I think when He indulges me and takes care of something like this!