Ever heard that saying? "She's so heavenly-minded that she's no earthly good!"  (said with disdain and eyes rolling, most likely.)  Well...to some extent that's how I've been feeling since mid-week.  Last weekend's intense spiritual experience found me up on the mountain top, and I've been hard-pressed to descend into reality, lest the joy desert me.  We humans!  How little we understand about the work of the Spirit!  I decided (at last) to pray for a return to balance, and since yesterday, little by little, I've been getting back to my routines, punctuated by restorative naps each afternoon.  :-)

Pookie Report:  My wee kitty (not as 'wee' as she used to be) is now...ahem...an FF (Former Female), having been spayed on Thursday (in a snowstorm)...She came through with flying colours.  When I got her home around 4 p.m., she was up and about immediately, playing with her favourite toy (the plastic pull tab from a frozen OJ container) and getting into everything, per usual.  To look at her, you'd hardly think she'd just had major surgery!  She has been sleeping a touch more, and welcomed my early-to-bed plans last evening, but other than that, she's been her usual self. 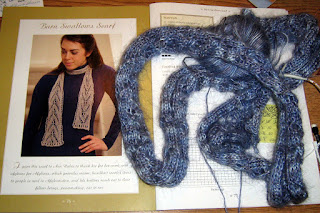 Is there knitting?  There's some Christmas knitting going on, but this week it was interrupted for the making of a long narrow "prayer scarf" for my friend P, whose husband is recovering from triple by-pass heart surgery.  The pattern is the "Barn Swallow Scarf" from the book, Wrapped in Comfort: Knitted Lace Shawls  by Alison Jeppson Hyde (Martingale and Company, 2007).  It's simple and pretty, but very narrow and in the yarn I used (Estelle "Watercolours", 50% Mohair, 50% acrylic), curls at the sides even with the eyelet border.  This photo was taken before I finished, washed and blocked it. Surprisingly, it took less than 1 ball (50 gm = 160 metres) for a scarf that's over 60" long which I decided was enough, seeing as P is shorter than my 5'2",  It washed nicely and is now blocking, but I couldn't get the eyelet border to open up.  Perhaps it will when it's dry.  I have 2 more balls in this colour-way (and a bit from the first ball), so given it's capacity to go and go and go, I'll likely make another scarf (wider) or perhaps a shawlette with it.

In the kitchen, you say?  Incredulously, yes.  I'm not that fond of cooking, but the low-sky, grey, snowy, blowy weather yesterday brought on the creation of a slow-cooker full of chili and a dozen applesauce oatmeal muffins, made with applesauce I'd put up and frozen from the apples I picked in August.  Now they're in the freezer, pending use in December (see below).  I had chili for supper last night and lunch today and have another couple of meals left yet. 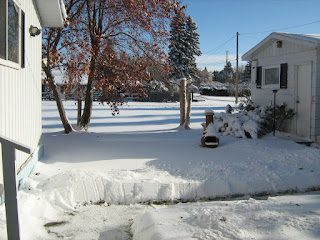 Any exercise?  In between knitting, cooking, reading (another Deborah Crombie novel featuring Inspector Duncan Kincaid and his Sergeant, Gemma James), napping, catching up with the blogs I follow and writing thank-you notes for last weekend, I've been working out with a shovel.  The snow finally stopped this morning.  The sun came out, the sky is blue -- and I at last managed to clear both my back walk and driveway, and my front walk, for what I hope is more than 5 minutes.  This is the view looking east from my back stoop toward my garage and the empty lot beyond, and showing a section of shovelled sidewalk -- just a fraction of what I cleared.  :-)

Though my walks and drive are now clear, there have been no plows out (we're 'done' by the County), so my alley and the side-street that leads to the highway are both under 6" - 8" of rutted snow.  I want to get to St.Cyprian's for the Remembrance service tomorrow a.m., but we shall see. Maybe the snow angels will be out yet, eh?

Last but not least on the "heavenly-minded-but-earthly-good" list is the drafting of the program for an Advent Quiet Day that I'm leading at St. C's on December 8.  Entitled "The Work of Our Hands", it's been inspired by the book Knit One, Purl a Prayer: A Spirituality of Knitting by Peggy Rosenthal (Paraclete Press, 2011).  The day (10 a.m. - 2 p.m. with brief breaks for snacks -- the aforementioned muffins -- and lunch) will consist of a series of reflections on the calming spiritual effect of various types of repetitive handwork, from knitting, crochet, spinning, and embroidery, to beading, weaving (table loom), card-making, mending (buttons, darning, hemming), jig-saw tending, photograph sorting, Christmas card addressing, gift wrapping and the like.  Once I get the rough draft completed, I'll forward it to my priest for vetting as she will be helping me with the structure and presentation.  I'm hoping to prevail upon one of my singing buddies to bring her guitar and help out with a song or two as well.

So now...I'm thinking a short walk while the sun is high, followed by a nap, and some work on that draft..."See" you later!
Posted by Margaret at 1:48 pm