No Knitting, You Say?

This blog used to be called "The Lady Who Knits on the Bus", which was how I was known by my travelling companions for some twenty-five years on the Calgary Transit System.  I was a knitter then, and I remain a knitter.  Despite my forays into quilting, embroidery and textile arts, knitting was my first love.  Since the age of about eight, I've always had something on the needles.  I realize, though, it doesn't always show up here.  The last time I talked about it was almost a month ago.  I've done more since then...

I continue to work on hats for the charity knitting tree at church.  This one is the "Bulky Yarn Watch Cap" from Twin Willows Farm, a pattern saved from a page-a-day calendar I had in 2006. 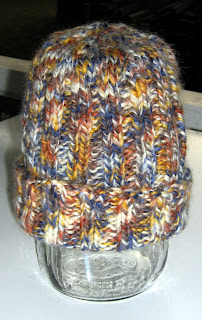 Then there's this tam, from Patons Yarns, made partly in their Classic Wool. and partly in Galway Heather from Diamond Yarns: 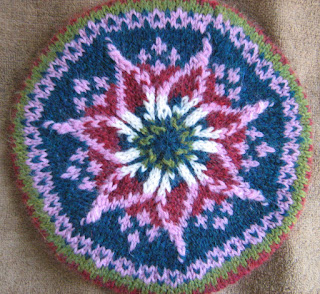 I really like this one, but it's too small for me.  :-(  There's plenty of yarn left for another; perhaps sometime I'll transpose the pattern so I can make one to fit my head (another inch around is needed.)  I can create original quilting designs, but knitting is a greater challenge.  I prefer to stick to the pattern as is! 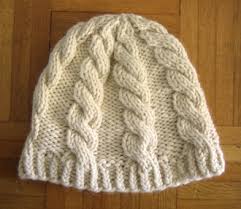 I continue to work on a prayer shawl, and my friend D's socks are coming right along (I know, I know, not fast enough!)  Meanwhile, I've started another hat -- a cabled toque from chunky donated yarn, appropriately named Chunky Cable Hat by it's designer, Emily Wessel.  It's a quick knit and should be finished soon.

Back in the C&G, this morning I finished my last assignment for Module 7, and shipped the photos off to Linda.  It involved needle-turn applique using a design from one of my sketchbook shapes.  I selected the bottle shape because I didn't want to struggle with half-circles or triangles...but it wasn't a great deal easier.  I ended up 'decapitating' the bottle and putting its stopper/top down on the 'ground' beside it, producing this little sample: 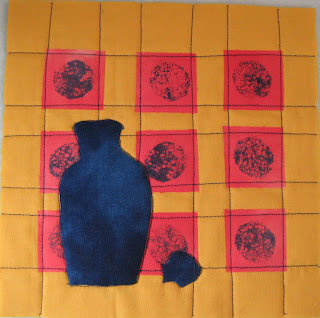 I call it "Topless on a Grid" (wink).  The yellow and blue are commercial fabrics; the blue-dotted red squares were cut from a piece of hand-dyed fabric I'd stamped with a sponge, and to which I'd applied fusible web.  I've been waiting for a chance to cut into it and use it, and this seemed to work.  However, it's far from my favourite piece and won't see the light of day outside my sample collection.  The needle-turn applique is actually quite well done, but the quilting -- especially around the shapes -- is only so-so.  I confess, I just wanted to get 'er done, and move on!  Module 8 is my final module and my Major Assessment Piece, featuring applique.  Onward and upward!
Posted by Margaret at 1:13 pm

Isn't it wonderful about those first loves? How they stay with us throughout life?

Sweet Wednesday to you my virgo twin