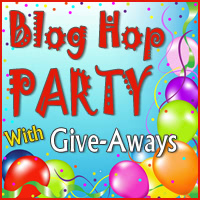 First, some friends of mine are giving away goodies for this Blog Hop Party to which they belong.  There's Margarita and Kit, for example.  Both make wonderful textile art -- and Marga combines her fabric with paper...

Then there's The Needle and Thread Network (TNTN), a network of All-Canadian (sorry, eh?) needle-workers of any and all stripes, celebrating its First Anniversary with a series of give-aways.  The Network is operated by my cyber-friend, Monika -- she of the stunning (to use an over-worked adjective) threat-painted postcards and pictures of the Canadian prairies.  What's not to like?!

Then there's Sandy H. of Q4TROU (Quilting for the Rest of Us), who is coming up on Podcast #100, and will be giving away even more goodies...

Looks like creative cyberspace is replete with generous spirits!

Stay tuned: I have a couple of major anniversaries coming up in the next few months...and yes, there will be a few giveaways.  :-)

Meanwhile, however, I continue to plug away at The Work At Hand.  Blessed with a couple of cool, breezy days -- let's refer to them as 'Autumn Previews', shall we? -- I have been working indoors.  Wednesday, while my kitten, Pookie, was missing, I put up eight large jars of pickled crab apples.  Friday, to celebrate her safe return home, I froze some more green, purple (yes) and waxed (yellow) beans.  Today, I made kale and potato soup (!)  for lunch.  Totally yummy -- from ingredients provided by my CSA (Sandy, you know all about this sort of thing, don't you?).  Tomorrow...I'm thinkin' carrot soup -- with the tops, too! 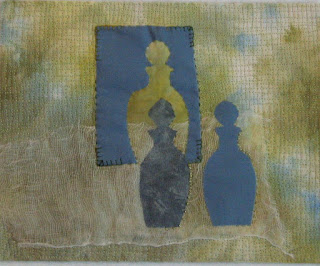 I used free-motion straight stitching (no, this is not an oxymoron -- just ask Leah Day)  I wanted to replicate the funky not-so-straight lines of the cheesecloth layer, and I really liked the effect I got.  I used a thread (Sulky 40 wt) that would complement the background to keep the effect muted.  Here's a close-up: 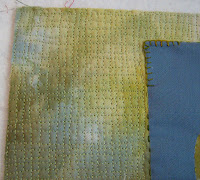 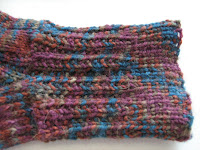 First, I washed up the Stepping Stones Socks, from Clara Parkes' Knitter's Book of Socks, made on commission for my friend, DH.   Shown -- a detail of the cuff.  Isn't it pretty?  The yarn is Emu Superwash Double Knit, which means it's a bit heavy for just shoes, but would work well alone (think: house- or bed-socks) or in clogs, or in boots.

I've recently finished 2 hats for our 'knitting tree' at church:


The "Shining Star" hat was made from left-overs from the Dr. Who Scarf -- Lion Brand's Vanna's Choice Solids in 'Eggplant' and Scarlet' -- both acrylic.

"Dibdin" was made in Noro Himaraya wool yarn from my stash.

Next, I mounted 'Triangulation' onto its black mat board, ready to send to Gail Harker for her fund-raiser:

I think the mat board really sets it off, don't you? (yes, I know that's both a loaded and a rhetorical question; no answer is expected!)

I like it so much that I have another piece planned, and will send Gail two.

Then I took the bull by the horns and confronted the thread-painting I knew I needed to do to finish this piece: 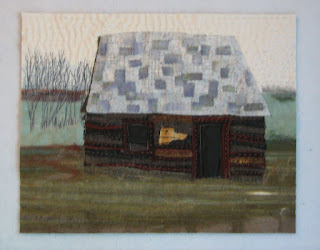 Working title: "House" -- simply the first in a series of abandoned Alberta buildings I want to re-create from photos...You might recognize a close-up piece finished earlier..."The Watcher".  In fact, I showed "House" in an earlier post, before the roof was finished, before the quilting and thread painting...Now all it needs is to be bound/enveloped and labelled, and to have a sleeve for hanging.

But...if it's to be a series, there really should be at least three, so I will be re-visiting photos in up-coming weeks to figure out the right piece.

To take a break, finally, this afternoon I began to assemble the 9-patch blocks I've been making from flannel given my by somebody (!).  I bought some solids to use in between, and a different print for backing, and will put the entire baby-style quilt together for our "knitting" tree at church: 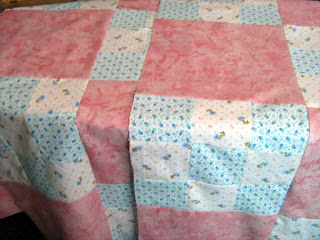 This evening? I think I'm going to kick back and relax!  Maybe even watch an episode of The Quilt Show...

Have a great rest of the weekend, eh?