A Full Start to the New Year (Long -- With Photos!)

For the past couple of days I've been fully involved with all things textile.  Where to begin? 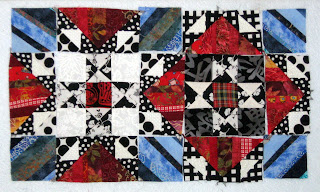 First, with the OBMQ, which has (at least online) reached its Grand Finale with the revelation of Part 8 on New Year's Day.  Where am I with it?  Well...as of last night (10 p.m.), I'd finished the rectangles, and put a couple of blocks up on my design wall to see how they looked.  My first reaction: Ouch! Noisy!


However, after a good night's sleep, they looked a bit better, and I decided to assemble the first couple of rows to see...and yes, indeed, there is potential!  Row 1 (all blue squares and rectangle units) is now lining the top of my design wall, and part of row two (all rectangles and Ohio Star blocks) is lying underneath it.  Clearly this assembly is going to be something I do slowly and gently, taking great care that the units match and fit together properly.  So far, so good, so stay tuned! 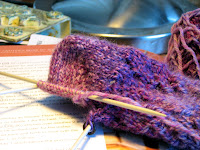 Next, in the Knitting Department, I've turned the heel on the first Veil of Rosebuds sock and have made my way down the foot by a couple of inches (24 pattern rows).  I confess I had my doubts about this heel at first, but now that its finished I can say it's definitely going to be one I try again.  It may not prove as sturdy as my standard 'Dutch heel', but I like how neatly it finishes without any additional fussing over picking up stitches along a flap, and creating a long gusset.  Pretty, isn't it?

On into the C&G Classroom -- where I've just completed Activities 5 and 6 of Module 5.  I am now in the throes of all things pieced.  Activity 5 was simple: identify the type of basic block used in an illustrated star block pattern (I assessed that it was a four-patch).  Activity 6, though, was more extensive: research some quilt blocks and pick three favourites; document their origins (or what you can find out about 'em); draw them on graph paper -- and then draw them again, skewed. Finally, colour them in and create 3-4 copies; then arrange the copies in some sort of design.

Just picking blocks was the first dilemma -- there are so many to choose from, especially if, like me, you are a long-time fan of Quilt Blocks Galore!, a resource simply overflowing with wonderful free quilt block patterns, most of which have a traditional, timeless origin. 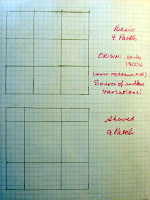 After browsing for nearly an hour, I came to my sense and picked these three: a Basic Nine-Patch; a "Dutchman's Puzzle" (aka "Flying Dutchman" or "Windmill") and the trusty "Ohio Star" from the OBMQ (aka "Star", "Eastern Star", "Lone Star" or "Texas Star"). 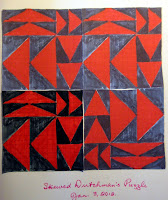 In recent months I've used the 'Disappearing Nine-Patch' that's been making the rounds.  I had great fun with it earlier this year when I did up comfort quilts for Japan in the wake of the earthquake and tsunami.  This exercise, however, is different.  Rather than make an original block, slice it and re-arrange the pieces, I was asked to shift the original design lines of the block to create something different altogether.  Ditto for the 'Windmill' and the 'Star'.  See what I mean?  It gives this piecer an entirely new way to think about her blocks!

Lastly, I got myself caught up with TAST -- Take A Stitch Tuesday -- which I've joined for 2012, in combination with the Crazy Quilt Journal Project (CQJP).  The idea behind this is three-fold:

Just look how much fabric there can be in a single deconstructed necktie!  (The orange bits are lining.)

I began to prepare for this endeavour before Christmas, when I washed all the ties in my collection -- simply threw 'em into the washer and then into the drier, regardless of fabric content.  None of them disintegrated and (apparently) none of 'em shrank.  Amazing!

Now TAST is weekly, and the CQJP is monthly.  My initial thought was to create one crazy quilt block per month (6" finished), with enough seams and space in which to incorporate the four or five Tuesday stitches in each given month.  The first stitch for the first Tuesday in this first month of 2012 is Fly Stitch.   In Sharon B's inimitable way, she illustrates a multitude of ways in which it can be used, so now I'm beginning to think I might try a block a week.  (In addition to giving me lots of space to explore the weekly stitch, it'll use up more neck ties!) 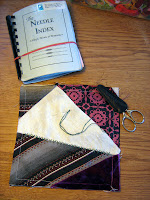 My first block uses fabric from two ties, plus a bit of velvet and another plain scrap to give myself some working space.  In this photo, you can see I've only just begun to build...

Your orca bay looks good. I think you will find the black and white get just a little less wild when then are sew together. I think my black and white did quiet down a little bit. Wow what a set of goals or projects you have planned.

Margaret,
I am exhausted just reading all you are accomplishing! I am definitely envious. You are acquiring such a broad background in everything! Wow! I am slightly intimidated. :)
Have fun!