I have more than one idea for posts today, but each deserves its own 'page', so...here's the first: an Orca Bay Mystery Quilt update.

We had a bit of a snow-blow overnight here (more blow than snow); this morning the wind continues.  I've decided to postpone my planned run till this afternoon, when the wind is supposed to die down, and to stay indoors and sew.  I've put the Christmas Day Chicken carcass in the slow cooker with  onion, celery, carrots, parsley, sage, bay leaf and thyme, salt and pepper and water to cover...for tonight's dinner, and after I finish this post, I'm going to resume the OBMQ -- now ready for Part 7! 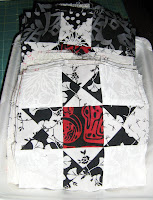 Yesterday evening I finished the last of the Ohio Stars from Part 6.  Here they are sitting in their tub, waiting for their part in this project.  The last 2 squares (1 white, 1 black), were definitely cobbled together from the last bits.  I'm just hoping that they'll work out alright in the end!

And here are the first few units for Part 7, ready to stitch:

The piecing together of these units has been a fascinating exercise in colour.  First, there was the selection of the black-and-white fabrics that could be read as 'black' versus the ones that could be read as 'white'.  Next, there was the selection of reds for the triangles -- and of blues in the Part 2 squares, which have yet to come back on stage for their next act.  To illustrate the effect in the Ohio Stars I took a few photos.  Here are a couple of the the white star blocks.  Notice the effect of mixing up the blacks, ans using some fabrics as black that could also be read as white: 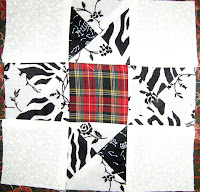 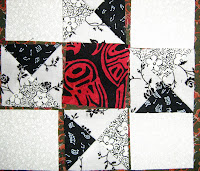 And here's something similar going on with the black star squares -- one of which was photographed before it got sewn together.  Look carefully now; these ones look alike, but there's a subtle difference because i ran out of one of the black fabrics...See how it gives the block a different look? 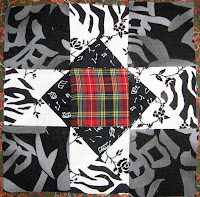 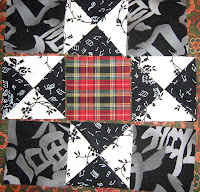 This game entertained me the entire time I was putting these together.  It became quite addictive; I kept going, if only to see what sort of combination I could come up with next.

I need to get into the studio now and sew a bit.  Happy New Year to those readers who may already be celebrating -- and stay tuned!
Posted by Margaret at 9:54 am

It is very interesting to see how this quilt is coming together! Happy New Year to you too, my friend! I hope this next year is a very blessed and happy year for you!

I love how the black and white gives this block a very modern twist!

Just love your colors, can't wait for it to start going together :)