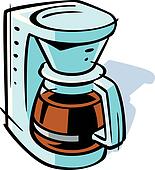 Years ago I bought a 4-cup coffee maker to take on the road with me to stitching retreats, for accommodation that didn't include a coffee maker in one's room.  It's a GE "Select Edition", and for the two or three times I used it, it worked beautifully (though I had to pour my coffee over the sink because the spout doesn't control the flow!)

You might recall my post a few weeks ago re: my trusty Braun 12-cupper that I can no longer use because it costs almost as much as a new pot to replace a broken lid on a 25-year-old one.  I've been using my 4-cupper as a replacement -- till this morning.

Came to pour coffee -- nada. Nothing.  The "on" light was on -- but no-one was home.  The machine was stone cold.  It didn't make a peep.  I switched electric outlets (why do we do this when we can see by the 'on' light that the electricity source is not the problem?!)  Still nothing.

Made a cup of tea.

Going to Red Deer tomorrow; will take both pots to the electronics recycling depot.

Them's some rotten apples! Can't....well, don't want to... start my morning without a cup of coffee! Now I will feel guilty tomorrow... savoring my cup of hot, caffeined, fresh ground... knowing that you are doing without. :-(