Perhaps 'dabbling' is an artist or crafts person's way of passing holiday time...just 'doing what comes to mind' and seeing what becomes of it.  Whatever it is, 'dabbling' is what I've been doing for the past few days.  Put it down to the heat, and the certainty of thundershowers (or thunderstorms) late in the day...but here's a sampling..

The Frame Loom
I've been fighting off the compulsion to weave for some time now.  Truth be told, it began about 13 months ago when I 'met' the "Knitter's Loom" from Ashford at the Olds Fibre Week (2010).  I was smitten, but knew that I a) didn't have $300 for the kit; and b) didn't really have space (except on my dining table) for it.  That said, the "bug" persisted.  I can't exactly remember what tipped me off...but some blog or other over which I stumbled this week had instructions for a basic frame loom, courtesy of podcaster Jennifer Ackerman-Haywood.  She's actually done a video on how to construct such a loom using an old book.  Me?  I took a failed bit of stretched canvas, and used a similar technique:

1. I used my cache of baseboard nails (they're quite small) to create this: 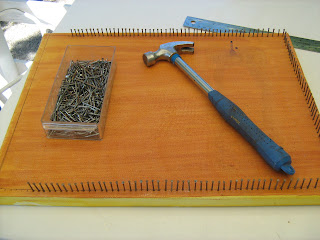 The nails are approximately 1/4" apart, all the way around. 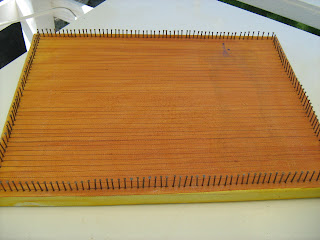 2. I took a cone of stashed wool to warp the finished loom: 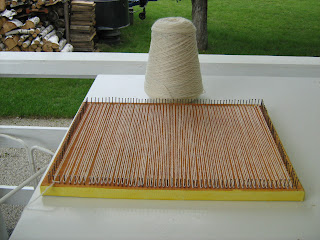 3. I played with chenille

and then with recycled sari silk: 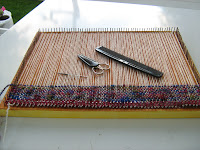 If truth be told, neither are to be commended highly for this sort of work.  The chenille 'worms', as it is wont to do, and the sari silk twists and untwists and is generally uncooperative.  Next up: more conventional yarn!
As the thunder and lightning draw nearer, I draw this 'episode' of "Dabbling" to a close.  Stay tuned!
Posted by Margaret at 5:13 pm

I think dabbling is like practicing - only more exploratory. I wish I could give myself permission to dabble more. Hope you made it through the storms alright. we had a doozie last night - blew sparks out of the television!

Ah, Margaret. I suspect that you have a plentiful supply of yarn to try. It will be fun to see the next rows! Enjoy!