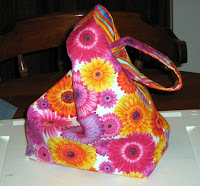 This is a Kawaii Kaban or "Pretty Bag", the pattern for which I bought at Quilt Canada in May.  The vendor was Bonnie, of Yokohama Silk & Fabric, located in B.C., and I've got to tell you, she's one terrific lady!  The pattern -- not designed by Bonnie, I might add --  is rather lacking in clarity -- to say the least -- and I was challenged by the instructions when it came to sewing up the part of the side seams near the handle.

This was very frustrating for me, because the bag is part of a birthday gift for a Certain Sister of Mine, and I have to get it off in the mail pronto.  If I'd known it was going to be a challenge to make, I'd have started earlier!

After a fruitless search for tutorials on the internet, I found Bonnie's website...and wouldn't you know it, she's on a break!  Won't be back till Monday...a mere 3 days from when I wanted the gift to be in the hands of the Birthday Girl.  Still...I took a chance, and e-mailed, and she replied!  Sent photos....which, alas and alack, did not do it for me.  Sent another e-mail, with further instruction, which brought a wee bit of clarity.  And in the end, she was willing to phone me, which she did, et voila!  Once she walked me through the process, I was off like a house on fire -- the bag was finished up in no time.  And isn't it just the cutest thing?!
Posted by Margaret at 8:50 pm