In the midst of new-year-student fever in September, I hooked into the Cross-stitchers' forum on Ravelry, and joined a fall Stitch-along (SAL) and swap.  For the SAL, I'm supposed to be working on the Pacific Northwest Sampler I started early last year for my brother-in-law and his wife's 25th anniversary (they don't know about it, and it's only 1/2 finished.  The anniversary was last December. Sigh.)  Haven't touched it yet.  However, I have managed to fnish a dear little biscornu (type of pin-cushion) for the swap (shhhhh---don't point anyone in the Rav group to this blog; it's supposed to be a surprise).

I posted about the start of this some weeks back (September 19th, actually)...using the free pattern for a fall-themed biscornu from The Victoria Sampler.  Well, I chose my own colours from a selection of thread samples in Autumn tones given to me by my friend, Jeannette, plus a ball of #8 'Pearl Cotton' by Valdani in a variegated colourway for the hardanger centre. 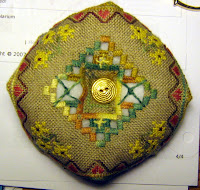 I then proceeded to mangle the design by stitching five wave-and-heart motifs on each side instead of four.  I discovered this about 3/4 of the way around the border, so just kept going rather than take it all out.  Of course, this meant the centre motif became a rectangle, rather than a square, and the hardanger around it had to be altered.  That worked fine -- till I came to do the cutwork that hardanger requires.  I had to improvise, cut too much, and had to improvise some more.

In the end, though, I think it worked out fine.  Plus...I thought the finishing was going to be far more fiddly than it was, and I like the buttons I chose (a different one is on the back, which is plain linen).  And the shape  of these things is so darned cute!  I might just have to make one for me...!


P.S. A big "Thank You!" to the folks at Violarium.com for their superb biscornu finishing instructions!
Posted by Margaret at 1:56 pm

You did a wonderful job! I love the Autumn colors.