My birthday thus far has been absolutely lovely.  First, I received an amazing number of "Happy Birthday" posts on my Facebook Wall.  Then, I got two delightful e-cards from good friends, to add to the cute and funny cards given me by my sis and my friend D.  Yeah, it arrived by *real* mail!  What's not to like? 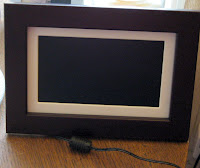 And I have these two great -- and very different --gifts.  The gift my sister gave me is decidedly high tech -- a digital photo frame!  Thanks to my daughter, who helped me get it up and running the other evening!  For now, I'm using a wee photocard (just holds 10 photos) to produce a slideshow of detail images from my art quilts.  I figure this is the perfect vehicle for marketing at an exhibit booth -- as long as I have a plug-in!


The other gift is...well...low tech: yarn and roving, brought back from Nova Scotia for me by my dear daughter when she visited in July.  Now that's thinking ahead! :-)   The roving is white Shetland, 4 ounces, from a sheep by the name of "Peaseblossom" -- apparently named after one of Titania's fairy servants in Shakespeare's A Mid-summer Night's Dream.  :-)  Lovely! 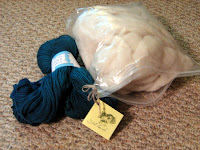 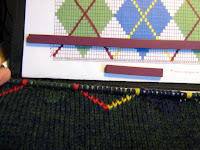 Speaking of knitting, I'm am making slow but steady progress on the first stocking in my commissioned Argyle kilt hose.   It's been a case of one step forward, 2 steps back, as working with 2 strands of each colourway, with yarn that has been a bit split-ty, has been rather a pain!  I abandoned bobbins early on due to tangling, and have taken up Kaffe Fassett's  technique of using lengths of yarn instead.  I ended up frogging the first 6 rows and knitting them back again; I'm now about to start row 10.  I have to admit I prefer the two-handed Fair Isle of the Christmas Stocking project , but I wouldn't be averse to trying Argyles in single strands in future.  (Somebody shake me!) 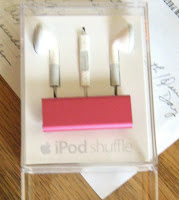 A third 'sort-of-prezzie' arrived this morning as well: my new iPod Shuffle!  It's a tiny wee thing -- even smaller than the aforementioned yarn bobbins I abandoned -- but it holds all the walking work-out music and podcasts I  care to load on to it at once (it's a 500-song size; I have no idea how many songs' worth equals half an hour of podcasting).  The ear buds are new to me too -- with the volume control on the right cord.  (What if I were left-handed; could I request one with controls on the left cord?)  It wanted to download everything in my music library almost as soon as it was attached to my computer; I managed to stop it, and clear out what I didn't want -- for the most part.  It also loads in "playlists" -- part of the new control gizmo, rather like file folders on a computer.  Thus I have my 'music' file, my 'podcasts' file and my 'workout music playlist' file.  I rather like that.  We'll see how easy it is to manage these as time goes on.

Oh yeah -- and the colour was picked by me, too, and if you look ver-r-r-ry closely at the bottom of the silver-coloured clip on the back, you can see my "custom" inscription: "Bloom where you're planted."  The things They come up with these days to tickle one's fancy!

Happy Birthday, Margaret! Sounds like you had a wonderful day.