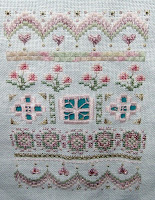 This summer I've been trying to catch up on Unfinished Objects -- embroidered ones.  The first was a small "Springtime Sampler" from a long-ago cyber-class over at The Victoria Sampler.  In fact, the class was so long ago, that this one isn't even in Thea's cyber-class listings any more!  I've managed to find a frame, and have hung it in my bedroom. 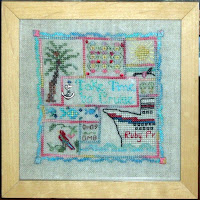 Next, I finished a wee sampler -- slightly off count, as mine always seem to be -- that I began on a very special trip in January, 2009 -- Jeannette Douglas' first stitching cruise -- 'round the Caribbean, with my sister as my travelling companion, and wonderful stitching friends -- new and old. (A bit over a year from now, Jeannette's cruising again -- to Alaska.  Having been there on a cruise in 2005 for my 30th wedding anniversary, I'm not going there again, but I commend it too you.  The scenery is spectacular, the stitching shops (Rushin' Tailor's Quilt Alaska and Changing Threads, both in Skagway) are wonderful, and I am certain Jeannette will keep you in stitches -- literally and figuratively -- while at sea.) 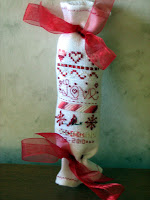 Then, this week, I finished the first project I did with Jeannette -- the "Love Needleroll", which was featured in the Just Cross Stitch Christmas magazine in 2004!!!  I've put it together and it rests on my buffet next to "Take Time to Cruise".  It took me hours to do the pulled-thread work for the ribbon -- more time spent prevaricating than actually pulling the threads! -- but it was worth it.

Now the weather is cooling off dramatically, and I, Like the Queen, am turning to knitting.  I am well away on the marl of the cuff of the argyle kilt hose I've been commissioned to make, and my thoughts are turning to knitting and finishing items for Christmas.

And then, just to kick my 50th Almost Fall Knitting Season off in fine fashion, I went shopping at The Crafty Lady in Lacombe when I was there on Monday.  As soon as I got in, Lori was anxious to show me their new shipment from Berroco Yarns --  -- fabulous yarns, including the intriguing 'Remix', which I'd love to buy...but not yet -- and a new book from Nora Gaughan, Number 7, with which I fell in love immediately.  Even better, it passed my "3 pattern rule", meaning that it had to contain at least 3 patterns I'd realistically make, before I'd lay out money for it. (Magazines have to do this too and, of late, few have passed muster -- but I digress.)  I then spent some length of time -- nearly till closing -- looking for the right yarn with which to create at least one of the patterns: the Rhodocrosite Wrap, perhaps, or the Quarzo pullover.  Alas, either the weight or the colour was wrong.  Lori had brought in beautiful colours of the Berroco Alpaca in various weights, but all rather muted and with a great emphasis on greens, browns and golds, which do even less for my skin tones as I get older than they did when I was in my twenties.  Sigh.


All was not lost, however.  I do, after all, have a capacious stash -- and I hadn't visited the steamer trunk in the back yard for some months.   First, I went to the freezer on my back stoop, where I found an almost-forgotten bundle of balls of elann.com's "Endless Summer Collection" Lara in ruby tones (colour "#335 -- and no, it's no longer in production).  Perfect for "Rhodocrosite"!  Then, I went out to the trunk in the garage and there, in the bottom right hand corner, I found a package of 13 - 50 gram balls of Berroco Uxbridge Tweed in "Marionberry" -- Colour #1171 -- and yes, it's discontinued too.  Such is the way of stash yarn. But "Marionberry" is a delicious mix of purples and blues, and will make a comfortable, even pretty "Quarzo".


Of course, with all the unfinished projects and the queue I have in Ravelry, it's unlikely I'll get to these projects (which are, after all, for me) for some time... but a gal can dream, eh?  :-)
Posted by Margaret at 9:59 am

I love doing hand embroidery and cross stitch! Your finished pieces are lovely! How wonderful it feels to finish projects that have been sitting around for awhile!