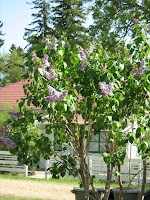 And we're still having frost warnings! Nonetheless, my garden is thriving (we finally had a good rain yesterday afternoon) and I'm loving the view from my kitchen window. This is my lilac, at the end of the back yard. To the right and up the yard from it are two flowering crabapple trees -- one pink and one deep burgundy (with matching leaves), and there's another one -- white -- on the east side of the yard, too. 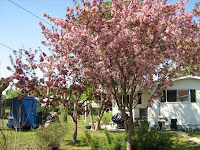 I've been doing some stitching outside when it's been warm enough -- and when I wasn't totally absorbed in pruning trees and planting perennials. I am also the lucky recipient of some re-cycled bark chips from my friend B, which I've been using to mulch the perennial bed. A couple more bagsful and I should be set.
I've also been busy washing fleece, finishing a project for the Heritage Park show, taking a stitching class, and knitting, knitting, knitting. No photos of the cleaned fleece -- but suffice it to say that I have enough to pick, card and spin to keep me going for a good long while!
The stitching class was "Turkish Delight", given by Gary Clarke from Australia, at the annual Fibre Potpourri at Olds College (not to be confused with Fibre Week, which is at the end of June). This year the Potpourri was organized by the Edmonton Needle Arts Guild, but
there was a good turn-out from Calgary too -- and some gals came in from Saskatchewan and others from B.C.
The weather was fabulous, the food was pretty good, 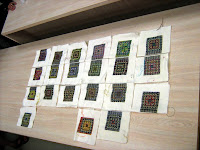 and the company was tops. I'd thought it was a canvas-work class,
but the technique used photo transfer on closely-woven fabric,
so there was no counting. Each of us chose our own colours; I went
with an autumn theme and used mainly threads from a sample pack I'd been given by Jeannette Douglas on the cruise I took with her in January. To the right is a photo of our class' work, taken near the end of the weekend. Since I got back, I've added more
satin stitch in a variegated silk from Gloriana Threads (#115 - "Topiary"), finished inserting the 'crystals' around the central motif, and have begun couching some narrow gold and rust-coloured braid around the outside edge. The cord is from a bundle of Oliver Twist 'One-offs' in the 'Chocolate' colourway that I bought somewhere some time ago -- don't ask for details! LOL!
"Where's the knitting?" you might well ask. It's been a full and inspiring month for knitting, too. I've finished one of the "Ilene Bags" (a free pattern in Ravelry, designed by Hannah Ingalls) in elann.com Esprit Print -- a gift for my BFF, P, who will be visiting later this month from Montreal; I've finished the Sierra Breeze prayer shawl from The Prayer Shawl Companion, and have started another PS in basketweave. I've also finished several dishcloths! My next goal is to finish up the four (count 'em -- four) pair of socks I've got stacked in my WIP pile, so I can move easily on to the Sweet Tee (Interweave Knits, Spring 2009) for my daughter. The photos are posted in my Ravelry FO set in my flickr photostream, here. :-) That's all the catching up I have energy for today. I need to get going on a small commission I have taken on for a local quilt shop.
More later!
Posted by Margaret at 1:00 pm

you have been busy. carding wool is hard work, too.

glad to hear you got some rain. I wish I could send you some of ours to keep for the next dry spell. We're' swimming down here. Off to check out your pix on raverly now.