The weather was gr-r-r-eat, the company was too...and I came home with about 5 lb. of Shetland fleece, too boot. Here are the photos:

These wee guys (gals?) were excited to be watching the action in the shearing area. I think they're Cotswolds, or CotswoldXes. Aren't they cute?! 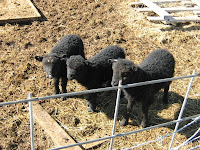 Tracy, the shearer, began with Penelope, which I think is either a Shetland or a Columbian. After shearing, Tracy clips the sheeps' hooves and administers shots (immunizations?). Apparently, T Burns a couple hundred calories per sheeep that she shears! 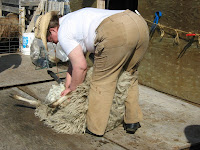 Here's my buddy, B, getting ready to teach me how to 'skirt' a fleece. This means we're going to go around it, pulling off and throwing away the 'nasty bits' -- dirt, poop etc. -- that collect around the butt, legs etc. This is done prior to the fleece being weight and priced, so that the buyer doesn't pay for this waste. 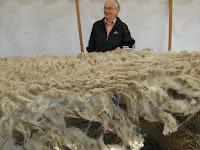 All hands on deck as fleece is checked for any last bit of unwanted materials. 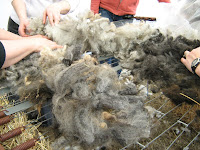 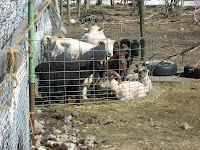 These sheep were shorn the day before we got there. Although the sun was warm, I thought they looked pretty disgruntled in there 'nekked' state! LOL! 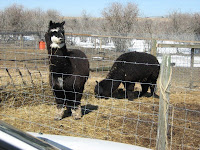 There are alpaca and lamas on the farm, too. The black and white one seemed to ask, "You lookin' at me?!" 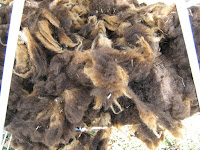 Here's the smaller of my two fleece, about 1.5 lbs, from a fellow named 'Ulrick'. He's an 'intermediate' Shetland. Very pretty! 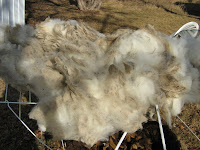 And here's my 3 lb., 12 0z. fleece from Rebecka, an off-white Shetland; I saw Tracy shear here with my own eyes, and everyone agreed I got a very good fleece in this one. As for what I want to do with them...well, I definitely want to dye some of the white one, but I'm not sure whether I'll do that in the pre-spun stage or after spinning.

My goal is to have at least some of the fleece ready to take to the Twisted Sisters' retreat in mid-June, so I can learn to used the drum carder with it. Next year, I'd like to be ready to spin a slightly trickier fleece -- such as the shorter-haired South African Meat Merino (SAMS). It's going to be a real learning curve -- but fun -- and that's not a ba-a-a-ad combination! ;-)
Posted by Margaret at 2:43 pm