All Manner of Things

I've had some photos sitting on my camera for some time, so I thought I'd share them with you. Even though there's snow still all over the place here, I am feeling cheered because Sunday afternoon, when I got home from church, my cherry tomatoes had sprouted! 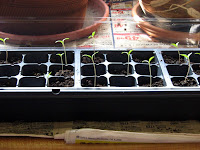 A second harbinger of spring? It was so warm that afternoon that I gave in to an impulse, hauled the work table out of my studio to my back stoop, and set up shop. 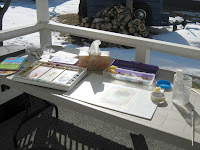 I puddled about for over an hour with my watercolours, producing two small pieces that showed how out of practice I was, before it got too cool to stay there. Out of practice or not, I'm leaving the table there, and plan to use it all summer long for whatever art work strikes my fancy. :-)

There's been quite a bit of knitting going on chez moi as well. Ravelry has me pumped! My mid-March dishcloth is finished: 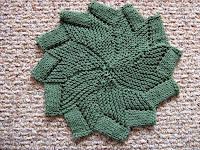 It will accompany the first one to the home of my girlfriend, D, when I see her in May for our final Vertigo Theatre matinee of the season. I worked on it when I was virtually snowed in at her place a few weeks ago, and she admired it. She's especially keen on the green. Both of us agreed the pattern would make a pretty candle mat, as well as a dish- or washcloth.

I am making great strides on my Mitred Scarf in that KAL, too. Here's my first photo, with the first row of three modules, completed: 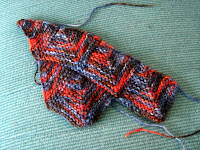 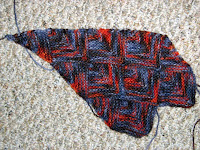 Not too long after that, I had 2 full-module rows finished -- and now I have four -- but have yet to take another photo. I want to complete the scarf for a silent auction fundraiser coming up April 24 in support of the Mirror Library. Any opinions on the amount to ask as a reserve bid? The yarn is 100% "Rainbow-dyed" 4-ply alpaca from a local Alberta ranch.

Finally, there are projects proceeding apace without photos. The first is my pair of Guernsey Socks, from the KBOY KAL on Ravelry. I am almost finished the gusset on Sock #1. The next is the Vernal Equinox Shawl by Lankakomero, the lace project being undertaken by those of us who have chosen, snow or no snow, to Celebrate Spring with a KAL -- also on Ravelry. I'm knitting mine in Artisan NZ Merino Lace Weight from Margaret Stove, distributed by Malvern Fibre Studio in Lyttelton, New Zealand. I bought it here in Canada eons ago and it's been languishing in my stash, just waiting for the perfect shawl pattern to call its name! (In fact, I've had it so long that I can't locate the specific colourway on the website; however, the closest thing to it, I'd say, is the "Hyacinth" -- pinks and purples.

If this weren't enough, the April KBOY KAL will be starting tomorrow -- and the selected pattern is "Little Shells Socks" by Shelia January. I've pretty much settled on making my pair with a sage-coloured wool/cotton/polyamide blend -- Jawoll Superwash from Lang. Again, it's been in my stash so long that not only has the colour been discontinued, the shop from which I bought it has closed! Ah well, not to worry -- I have enough of it to make 2 pair of socks.

Then there was the temptation of last week's "Free Friday" pattern from Berroco, "Nimbus". I found another batch of perfect yarn in my stash: "Kabir" from FILTES/Rosina Filati -- another discontinued yarn, of which I have plenty to make this little topper. I have 'modified' the pattern by deciding to knit it in one piece to the armholes; I'm just not that fond of seaming.

Oh yeah -- the April dishcloths will be out tomorrow too. I have some sunny yellow and orange Sugar 'n' Cream cotton for those...

Ongoing: the top section of the IK "Pub Sweater" for my son, from the Spring 2009 issue....and I await the arrival of some Berroco Comfort for the "Sweet Tee" in that same issue -- for my DD. It looks like my 'bl0g is aptly titled; my hands aren't due to be idle for quite some time!
Posted by Margaret at 11:45 am

Dishcloth looks great! Can hardly wait to see it in May.