Lest You Think I've Stopped Knitting...

I thought I'd post photos of 3 projects currently on the needles (excluding the Roundtrip Jacket that is languishing on Sleeve #2...): 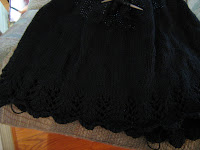 This is the body of a camisole from Last-Minute Knitted Gifts by Joelle Hoverson - the "Silk Camisole", which I am doing in a silk/cashmere blend I'd stashed away for just the right project. This seems to be it! 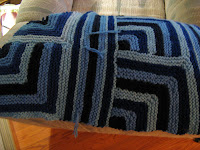 This is the start of an afghan for an elderly friend who's recently contracted myeloma. I'm making it with yarn donated to my church knitting group; hence several knots in one of the blues. I figure, I have to sew in so many ends on this one anyway, what are a few more?! I'm having fun with the pattern though. It's from the May 08 issue of "Creative Knitting", in which I've found several other 'wanna-make' projects. Given the amount of yarn I have, I may not make as many bands of mitred squares as are called for, but I think it'll turn out nicely all the same. 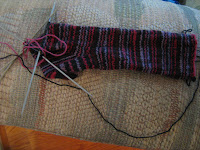 And this is Sock #2 for my knitting guild's sock exchange. We get the code name and sock size/colour preferences in February, make a pair, and exchange 'em at our July pot-luck -- code names revealed. This is my 3rd year in the exchange; seems I never cease to enjoy receiving hand-made socks from a secret pal!

I have fallen a bit behind in my Mixed Media Surfaces class work, but have managed to put the body of my box together from Week 2: 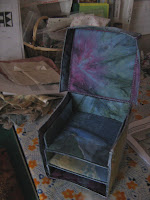 Here's the frame with 2 shelves in. Not pictured is the fact that I have the top shelf in as well, and the piece is ready for its drawers, which I have yet to put together. I may put it aside to work on the silk vase from Week 3. This includes dyeing silk hankies; so far, I've brought out the hankies and dye, but haven't alotted a block of time in which to play with this. I work most of the rest of the week and leave for Lethbridge and beyond on Thursday (gone a week) so...I may fall even farther behind!! Ah well; such is life.

Oh my what an interesting project - glad you showed a picture before it was finished. Happy traveling.