At last it's raining!  Here on the rolling prairie of central Alberta, we last had rain more than 2 weeks ago, and I was scraping the bottom of my rain barrels, trying to care for my perennial flower beds and my recently-planted veggies.  Today, I'm delighted to see the rain -- and to spend my day in my jammies, catching up on correspondence and sorting out stuff.

Those of you who've been following me here for a bit will remember that one of my great losses in 2020 was my best friend from high school, a woman only 6 days older than I who -- as far as was known -- was in good health.  No, it wasn't COVID; it was her heart.  I still miss her.  We shared embroidery in common, and cross-stitch, and she introduced me to quilting -- and then invited me to join her at an exhibit of art quilting students, which changed my life.

Her daughter has been sorting out her sewing and craft supplies in the last few months, and got in touch with me about something I might like.  Last week a box arrived -- full of stitchy goodness: fabric, thread, a couple of kits, some patterns and a few magazines.  Treasure Trove!

Then came the question: where to store it so I could use it?!

The first thing I did was sort the fabric.  I pressed the linens and took the thread count of any that weren't labelled.

But...my embroidery fabric had already filled one drawer in my  studio and spilled into another.  Uh-oh!

This morning I was up early and ready to SORT!  Coffee in hand, I opened that oh-so-full drawer.  In it I found not only the fabric, but...of course!  There were several kitted projects I'd decided I wanted to do...eventually.  (It's part of my live-until-I'm-250 plan, remember? 😉)

I emptied the drawer completely and started from scratch.  Once I had of my fabrics out in full view, I realized there were some things I no longer wanted or would use -- so all of that has been bagged up and will go to the local charity shop.  Then I returned all the fabric to the drawer -- stacked by thread count.  There was room to add in my recent legacy -- lovely! All is well in the drawers of fabric.

But then...there's the flosses -- mainly DMC but also some embroidery wool (not tapestry wool) and over-dyed floss (Weeks Dye Works and Gentle Arts in particular).

On the left in the above photo is the Very Thick blue binder in which I'm currently storing my floss -- mainly DMC.  Yes, I have other threads (mainly silks and perle cottons) but those are stored elsewhere -- hanging in packets on a pegboard, or in little balls (the perle cotton) in recycled cardboard egg cartons.

And the pages in the binder -- recycled from the days when people kept computer discs in the plastic pockets -- are starting to fall apart.  They're made of thin plastic, and many (most?) are starting to crack and split in this dry climate.

Before the existence of the binder -- about 25 or 30 years ago -- I used to keep cotton floss on bobbins in a box.  When my interest in cross stitch went on hiatus -- C. had just introduced me to quilting, for starters! -- that box was given to my daughter, who was on a 'friendship bracelet' kick and used all the floss to braid and/or weave those things for herself and her friends.  I never missed it.
At this stage in my life, though, I'm not running out to invest in that sort of fussy system again.  I have some "Floss-Away" bags somewhere, left from when I bought them to store embroidery silks, so I'm hoping I can locate them without too much trouble.  I might be able to store my skeins of thread in them in numerical order, and put 'em on rings.  Then I'll re-arrange an existing bit of peg-board...
Ahhhh, yes...the domino effect of re-organizing...!  Good thing more rain is in the forecast...😉
Before the Treasure Trove landed and the rain hit, I'd been busy enjoying my yard and garden.  Spring arrived in full force and my ornamental fruit trees have been buzzing with bees, putting on a show! 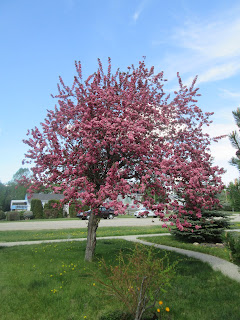 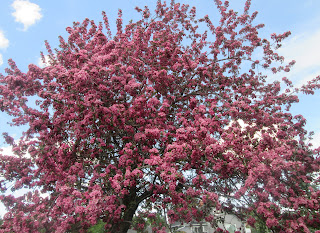 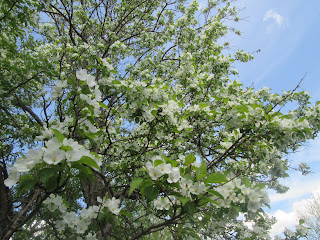 When not mowing the grass (!), it's been delightful to stitch out in the fresh air, surrounded by glorious natural sounds of birds and bees -- and the colour of the blossoms against the blue of the sky.
As a result, I've had some Finished Objects and some Finally Finished ones too!
A week ago I mailed a parcel off to Brenda and Laura, creators of the Brenda and the Serial Starter FlossTube -- the Just Nan pair of projects I'd been making for them, so that "Marching Orders" can "march on"!  These I'd finally finished with some trepidation -- there was a bit of a learning curve, and those of you Gentle Readers who know me, know that "I don't do fiddly!"
Laura's was finished as a tiny needlebook -- about 3" square!!

What to do with Brenda's, which originated as a sampler, because she's also known as "The Sampler Stitcher"?
With a deep breath, and a close following of the YouTube tutorial by the wonderful Vonna Pfeiffer (aka "Twisted Stitcher"), I made my very first 'flat fold'!

I used MistyFuse and liquid gel medium as glue, and mat board as the foundation, covered with fabric.  I interfaced the stitched piece, and laced it to a piece of the mat board. I padded the a second piece of board with a thin piece of scrap cotton batting, lined it with some of the purple fabric, and glued those two pieces together.  Then there were two pieces of mat board -- both covered in fabric -- glued together.  There's a little piece of red fabric hem-binding (left from the days when I sewed garments) that is fixed in between front and back so it will stand up.
"There!  That wasn't so hard, was it?"
I might use that technique again, if I have call for it.  Meanwhile, I just forge ahead with current projects.
I've finished another stitched piece that needs to go to Montreal, and I don't want to ship it framed, so I may lace it to mat board and let the recipient frame it in her own taste and timing (it's a birthday gift for a friend who loves to cook and bake).  At 7" square before borders, I think it's too big for a flat fold, and I've nothing in fabric that would suit its going into a quilted frame:
Kind of folksy, but I like it, and I think she will too.
In other finishing news:  I joined in on a "Hap KAL" (Knit ALong) with the Ravelry group operated by The Woolly Thistle yarn shop.  I love woolly wool, and have been blessed to have some sourced directly from Scotland (on my trips!) and some from sheep raised and sheared here in Alberta.  A hap is a large shawl originating in northern Scotland and the Shetland Isles, often knit in garter stitch, centre first, and bordered in lace -- often using the "auld shale" (or 'old shell') pattern.  I started one on 2007 from yarn I brought back from Scotland that year, using a pattern in the book entitled Shawls and Scarves: The Best of Knitter's Magazine -- and finished it in 2019. (It didn't take 12 years to knit! It sat languishing for some years before I picked it up and finished it).  It's full-sized and perfect for coziness in Canadian winters!

This latest go 'round, I knit a "half hap" -- and an asymmetrical one at that -- using the Hemu pattern from Joanna Ignatius.  I started it with the others in the KAL, and was letting it sit (again)...when I got word that my dear cousin James, with whom I'd had dinner in 2017 in our hotel in Portree, Isle of Skye, near his home, had died.  I was very fond of him (2017 was our third in-person encounter) and corresponded with him regularly.  I decided to finish the hap in his honour and memory.  His funeral was this past week (I've not brought myself to watch the taping yet)...I'm tearing up just writing this.  But the wee hap is finished, and just needs blocking:

Last but not least, I've finished the "Hearts of Hope" quilt top...the third in the blue-and-golden yellow series.  I've found pale blue poly-cotton in my fabric stash for the backing (part of my 'other' inheritance, from my friend J., who also died in 2020 at the age of 89), but have yet to sandwich and quilt it.  It measures about 55" square, so will make a nice little comfort quilt.

And that's pretty much "it" from this corner of the world at the moment.  No new art work to show you (ideas continue to percolate), but I'll be sending "Incarnation to Resurrection" off to the US later this week, preparatory to its being part of the Sacred Threads 2022 exhibit, in the "Spirituality" section.
I've missed the June 3 link-up over on Nina-Marie's Off the Wall Friday...maybe I'll catch up to it later this week.  In any event, if you've been reading, thanks so much for coming along on my latest adventures.  Whatever the season, whatever the weather, I hope this finds you well, safe and creative this week! 😊

Well, once again good pal, you have not disappointed - I have sipped away on my cuppa on a super rainy day (yes, we have been inundated here in Ontario) and am ready to get to work myself... your artworks are beautiful and I love the new technique you worked through for the standing fibre wrapped framing... awesome. I never have enough table space to display that way - too much "man and grandson" stuff in my house. I am the pushed-off in a corner lady who just heads to a back bedroom for my stuff...

That is what Studios are for and they are not welcome!
I am working on things as inspiration for my 5-day Arts Camp/Retreat that will be held at the Tett Centre in the last week of July - mainly SAQA friends I think as the locals are just not ready to start coming back to live events... The posting goes up on our Tett Centre Events page this week, and I think it will fill. Will help me earn enough to pay rent through the winter again...
Take good care - make art!
Bethany