Everything Old is New Again

That's what it's felt like over the past couple of weeks, because I've been doing such a variety of things.  Every day I try to stick to a routine, and for the most part it's working, but some days I'm more distracted than others and have to take myself in hand to get anything done!  I don't know if that's a sign of the times, or my age...or what.  Anyone else out there feel the same?

There have been at least two (count 'em!) consistencies in my life during this time: the "Keep It Out of the Landfill" project, and the last of my Christmas knitting.

I'll start with a finish: the 'Basket-weave Strings' top is done!  It's now folded away in my cat-free guest room, awaiting the time when I send it out for quilting (too big to do myself without injury!)  This photo was taken last week, before the snow arrived and the temps plummeted!

At the risk of making it look like a Christmas quilt, I went with a dark red border.  I was going to use the same green as the set-in triangles, but it just fell flat.  Bright red would have been too much, but I think the dark red works fine.

You can probably sense from my comment about the red/green fabric for "Basket-weave" that I'm not a seasonal decorator, though I do put a few festive things out for Christmas -- and I always put out my creche.  Well, Kate, who's one of you Gentle Readers, invited me to drop by her group's "Virtual Show & Tell" to see all the Christmassy things being made, and I was inspired!

I routed out a kit I'd bought long ago and far away, and set to work.  Within a few hours I had it all together; all it needs now is for me to finish attaching the hanging sleeve.

Underneath the fabrics I'd stored away for that nativity scene (far more fabric than the small version actually required!) there was this wild piece -- almost two metres worth!

It's called "Bubble Blast" and was "Designed for Red Rooster Patterns 10475 - (c) 2003 (see the selvedge below).  I've no recollection of buying it -- or what I thought I would do with it.  All I know is that it's not part of my "inheritance", as it's been buried under other fabric in the bottom of a dresser in my studio for the last 13 years (where I stored it before that, I've no clue!) 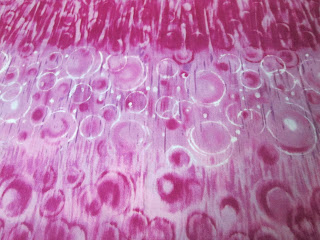 "Wild" is an understatement, don't you think?  Still, Bonnie Hunter's theory is that "there's no fabric so ugly that it won't look good if you cut it small enough" -- and she's right!

In my last post  I mentioned I'd printed off the first part of Bonnie's "Rhododendron Trail" 2021 Mystery quilt; pink is one of the fabric suggestions -- including 'raspberry'.  With this yardage -- and the change in the weather from 'confused' to 'actual winter' -- I decided The Time Had Come.

Between yesterday and today, I've made the units for Clue #1 and started them for Clue #2.  See how nice that pink looks when it's cut up? 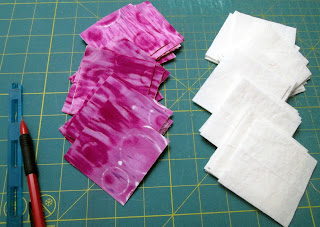 As for my strings, which continue to multiply, I've been using them -- with crumbs to start -- to make wonky log cabin blocks -- 5 1/2" square -- as 'leaders and enders' for whatever else I'm working on, trying to use up crumbs and strings.  I've assembled almost 30 of them now, and am aiming for several dozen more, so they can become something more substantial than a lap quilt, but in the Lap Quilt Department... 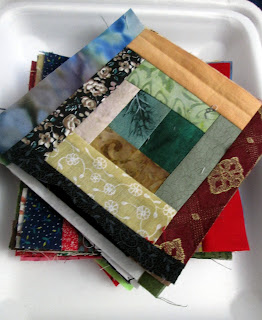 And there's yet another find: a baggie of small blocks I made a good 20+ years ago, when I was a very new quilter.  They were from a set of printed patterns (long gone) for a beginner's quilt.  I gave it up when I was invited by a friend to accompany her to a local quilt shop for a block-of-the-month, which was much more fun than trying to figure this stuff out on my own.  The baggie was stuffed with a batch of nine-patch and Rail Fence blocks, each about 3 1/2" square.  I say "about" because...well...I wasn't the world's best piecer back then!  (I'm still not, but I've come a loooong way!)

I decided to make them up into lap quilts, and started with the nine-patches, thus:

Next up: the nine-patches, some of which had already been assembled into larger blocks:

Then I woke in the wee hours with an idea...and got to it first thing after my morning coffee:

I love it!  I hope it'll make a quilter smile.  All it needs is its facing, a label and a sleeve, and it'll be ready for the (God willing) Lacombe Art Show/Sale in the spring!

On the knitting front, my Advent socks are languishing a bit.  I did get the first one finished:

The second one is cast on, and I'm 2/3 through the ribbing, but that's all.  The reason?

THIS!  The knit that kept on knitting... 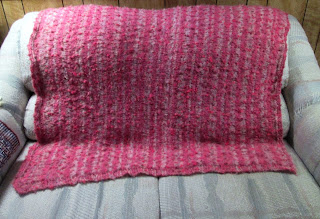 It's a one-ball (300 grams, 600 metres!) throw -- plain stockinette with garter stitch borders -- on 7 mm needles, and I finished it this morning after knitting what seemed like forever!  It finished at 36" x 45" after washing and hanging to dry.
I really liked the colour, so bought 2 balls of the stuff, but after making this one, I'm going to give the second away (probably to the local thrift shop).  I don't want to make another!
I've just had my COVID booster (Pfizer) and with the Deep Freeze in full force, it's going to be a pretty quiet weekend.  I'm going back to my "Countdown" socks, maybe even finishing them before Christmas Day.
And I've two new books (bought with an Xmas gift card) waiting...as well as the Winter Issue of "Quilting Arts" magazine.  What's not to like?
I'm linking this post to Nina-Marie's "Off the Wall Friday"; as she says in this week's edition, sometimes we need to slow down our days and take it easy -- savouring the time with friends and family (whether in person or on the phone or online).  Given the pace and the lapses into distraction that have filled my days in the last while, I think that's good advice indeed.
Wishing all my Gentle Readers a safe, happy, peaceful Christmas, however you mark the season.  Till later... 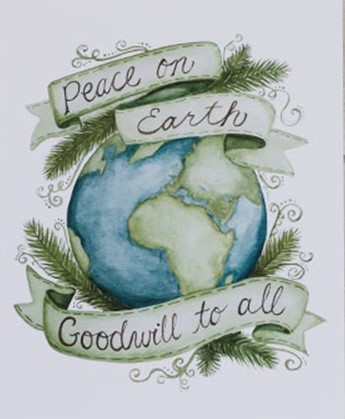 
Good Saturday morning sunshine...
Lovely post!
Tahe snow has not arrived here in Kingston ON... we are inundated with Omnicron (?) and most everyone is staying put and getting their Boosters (Dale and I have ours) and we are just hiking and loving the land around our local area.

I am fascinated and delighted with all you accomplish - quilt tops ready for long arm pal, lovely knit throw, socks and small Nativity and landscape quilts - I too have downloaded the Rhodendrone patterns and will get after that work during winter days...time to make a quilt and I love this one.

Busy fingers and clearing of you dresser drawers mean you are way ahead of me - but there are many "no drives to town" days ahead - so I will get after them as the new year rolls in!

Take good care and know you are loved! Happy Christmas!

They are beautiful! xo

Stay blessed and I wish you a gentle Christmas. xo