Socks and Hats and Sweaters -- Oh My!

I started this weblog back in February 2003 (!) and at the time, it was entitled "The Lady Who Knits on the Bus".  Yep.  It was a blog focused on knitting -- even though I'd been quilting for almost a decade, and had begun to take lessons from a local quilt artist that would eventually move me into the world as a textile artist myself.

I learned to knit about age 8 -- so over 60 years ago -- and have essentially never stopped.  Every year around this time, my knitting ramps up, because Christmas is coming.  And -- new to me this year -- October is Canadian Wool Month.  That takes my knitting up a notch, particularly as it overlaps with Shetland Wool Week 2021, which runs through October 3.

Here's a little clip showing the state of my "Yarn Studio" (aka my living room).  I move a bit in slow circles, so if you think you might get dizzy, sit down to watch.  It's only 1 minute long but... 😉

You can see there's lots on the go!  I'm currently working on the second of two pair of baby socks for a little fellow born this past May.  He and his parents have moved to British Columbia, so I knit the first pair (6 month size) in a wool/nylon blend, which should keep his feet cozy for the damp winter there: 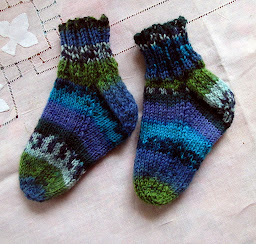 The second pair, cast on yesterday -- I'm now on the foot of the first sock -- is in a 1-year size, so I chose a cotton/wool/nylon blend that also has a small amount of elastic in it -- it's Patons Stretch Socks in the "Kelp" colour-way: 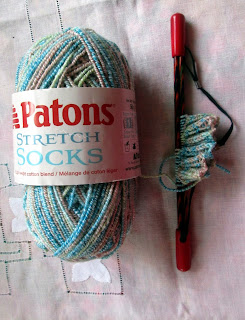 Here's what the finished pair will look like -- this photo is of a pair I made with the same yarn for a different baby, last December: 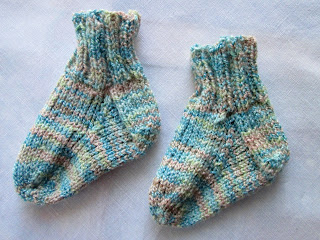 My favourite pattern for these socks isn't on Ravelry; it's one I bought from River City Yarns in Edmonton -- and I don't know if they still have it for sale or not.  I always make a 2:2 ribbed cuff, though the pattern offers rolled cuff and a 1:1 ribbed cuff options.  They're fast and fun to make, and use up scrap sock yarn (well, at least some!)
This month in the Socks from Stash group on Ravelry, we had to post a selection of stashed sock yarn -- three to five balls or skeins -- and create a poll.  The other members voted on your selection, and you have to knit a pair of socks using the winner of the poll.  Here was my selection:


Even though, in the intro to my poll, I said I had no preference, in truth, I did...but the voters chose my least favourite colour-way.  Can you guess which one?  Regardless, given the number of items I have on the go, I'm planning on knitting a simple ribbed pattern -- the Colonial Rib from Katie S.  These will be given away -- but not to anyone I know!  😉
Meanwhile, the Canadian Guild of Knitters is holding a Knit-ALong (KAL) over on its blog and Facebook page -- and on Ravelry!  It started at 10 p.m. last night and runs through October 14.  There's even a free hat pattern -- a ribbed toque designed by "Kye" via the Woolmark Company.  (Yes, in the pattern it's called a "beanie" but in Canada, it's a toque!)
I need to knit a hat for Xmas -- but it will be out of acrylic yarn, and so not fit the criteria for the KAL.  That said, I also have some Canadian wool from "CloseKnit" which I bought at a wee shop in Stratford, ON a few years ago -- so I'm going to knit the (ahem!) toque out of that.
Last week, via Shetland Wool Week 2021,  I took a class on thrumming from Helene Driesen -- making mittens using a pattern Helene created; I was in it for the technique.  I gathered the materials: 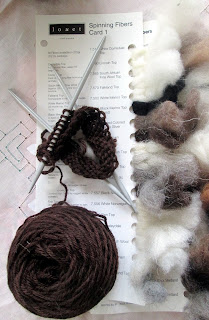 I chose a ball of stash yarn -- 100% superwash worsted wool from Ella Rae -- and my thrums came from Louet, a Canadian company -- from wool sample cards given my by my former employer, the Crafty Lady.
The thrumming technique is simple but not easy at first, simply because you have to get into the rhythm of it.  It helps, too, if your thrums aren't too thick.
I managed to make a sample: 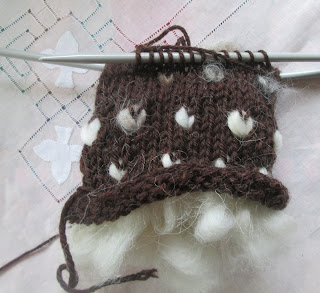 And yes, my thrums are too thick!  I took it all apart, thinned my thrums by half, and decided to make a hat instead.  I'll be casting on another of Helene's patterns using Berroco Vintage Chunky, and recycling the now-thinner thrums. If it turns out, I'll wear it on my winter walks this year -- and if it's really warm, I'll wear it shovelling!  😉
On the sweater front, my Turtle Dove II hasn't grown at all, but I've finished the yoke on my first Ranunculus pullover and am well along on the first sleeve.  I decided to leave the body until the sleeves -- which I want to be 3/4 length -- are finished, just to ensure I have enough yarn, because I also want to make the body longer than called for in the pattern!
But have you done any quilting?
Yes -- artfully, but not studio art.  Confused?  Well, I'm working on a commission -- a throw-sized quilt for my client to give to her adult daughter.  The recipient is in her late thirties, as I understand it, and likes grey and turquoise.  Hmmm.  I chose these fabrics, blessed to get them from Caroline's Homespun Seasons in nearby Stettler: 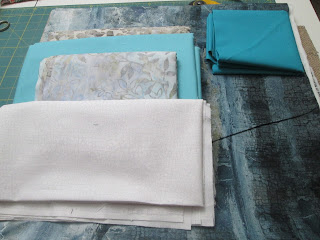 It's tough to get on camera, but the "white" has a fine grey pattern on it: 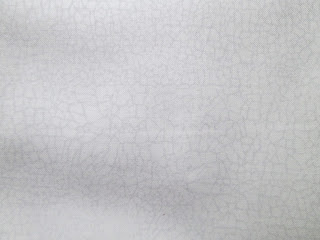 It'll measure about 58" x 66" and is in a variation on the Rail Fence. I decided to make three different strip-sets, using 2 1/2" strips, so that each block will finish at 8" in the quilt.  This allows me to make a 'random' arrangement of blocks which I hope will suit the young woman's contemporary taste.  Here's the layout before sewing: 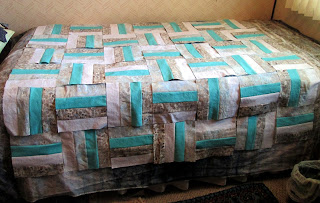 I've got the first four long rows sewn together, and the last two, and just have to join them to finish the centre of the top.  Then I'll add a "zinger" cut from the darker turquoise, and put on a border made from the rather "pebbly" grey-brown batik (top fabric in the stack above).  The backing is a grey-aqua-black gradient fabric, shown underneath the fabric stacks in the photo above.  It's a wide backing so glorious that I purchased a bit extra to enjoy for landscapes in the future.  The binding will probably match the outer border.
And what about your yard and garden?
Well, Gentle Readers, the yard and garden are just about put to bed for the winter.  I have some tomatoes to uproot, some roses and peonies to prune back, my baby apples need a bit of pruning and I need to put out some fresh soap sacks to ward off the deer...but that's about it.  All is turning green and gold in these parts...providing fodder for artwork as the winter sets in:

Surrounded by colour, I'm entering October with strong, active hands and a full heart.  Though it's a challenge daily to resist the Pity Party that the fourth wave has ushered into our province, there's nothing quite like a walk in the woods and fields, a steaming cuppa (make mine coffee -- black, please!), and yarn or roving or thread or fabric in ones hands to rise to that challenge, choosing comfort, hope and gratitude.
As Nina Marie quotes today, over on Off the Wall Friday, people remember how you make them feel -- and there's nothing like giving a gift from hands and heart to make others feel good.
Till next time... have a great weekend, Gentle Readers -- stay safe, stay creative and stay cozy!