I don't often post two weeks in a row, but I've been thinking.  I do a lot of that (thinking, that is).  My mother used to tell me I did too much of it, and that it might cause problems for me as I got older.  She was right about that -- at least some of the time.

The talking to myself (which is not to be confused with "self talk") has continued, as it gets me from one day to the next.  I've come to realize that some days are filled with "BIG" things -- a long list of errands requiring dressing up and going into town -- and others, not so much.

But this week it was the little things that made me happiest:

Here are some of the photos from the last few days, just to illustrate...
There's a short wooded path on the north end of town that's navigable now that the snow has gone; I love it's sunshine and shadows.  Here's one view: 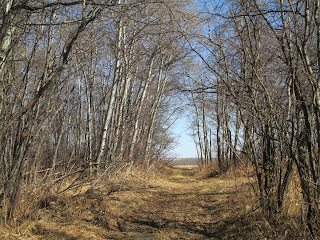 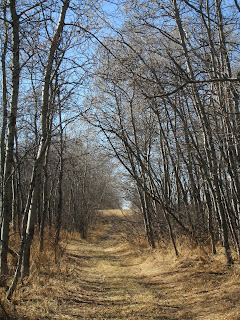 I got a lovely piece of art fabric this week from cyber-friend, artist Susan Purney Mark; it might work for some of the trees in a piece inspired by these woods -- or if not, definitely for something in the future.  I am pondering another few art pieces but treading lightly, as my hopes for the Lacombe Art Show's actually happening at the end of May are very wobbly.
COVID case numbers are rising here in Alberta (though not as badly as in highly-populated Ontario, and my heart goes out to friends there); there are a number of "COVIDiots" in my neighbourhood and a business that's been closed down continues to open its doors, even raising money for its court fight for the "right" and "freedom" to infect anyone at will by not obeying current protocols.  We have fewer than 500 people in this hamlet, and reportedly 2 employees of the business in question are out "sick" (no admission of what it might be)...so it's only a matter of time.  But I digress...
I am gratified that in the SAQA Spotlight Auction at this year's Conference (online now), my wee contribution has garnered some bids.  That warm's my heart.  Lest you don't remember it:
You can view all the auction pieces at the link above; bidding is open through April 25 -- when the various tables close at staggered intervals.
NOTE:
On a different topic, here's my new compost bin -- the second of two.  It's stationary, while the old one (more than a decade) is a rolling version. 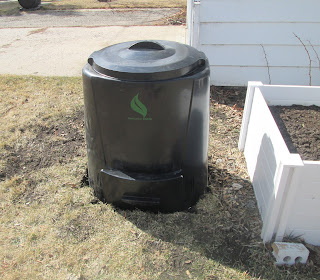 On the knitting front, my mitred-square blanket is growing daily.  As of this writing, it's got 22 blocks and a 23rd under construction; here it is at  15-going-on-16  blocks: 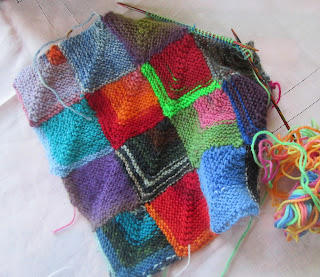 Each block is about 2 1/2" square, and I figure I need 25 x 25 to get a lap blanket!
I've had two block-by-block 'QAYG' projects underway for months now.  I pick them up and put them down as the mood strikes, and I know I've posted about them before.
The "Easy Breezy" block is from Bonnie Hunter -- her 'Leader/Ender Challenge' for 2020.  It runs from July to July.  I decided to make a small version as a tummy-time quilt, and to do it as-I-go.  Here's what it looked like on my design wall in early March.

And here's my progress to date: 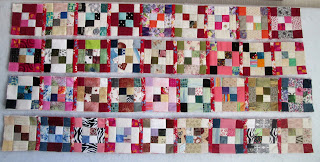 Four of nine rows have been joined by sashing -- but (and yes, it's a good-sized but) I have yet to do the hand-stitching of the sashing on the back.  Yes, I know there are people who do both front and back by machine -- I'm not one of them!  I don't like the way it looks.  Sorry, eh? 😉
The second QAYG block-by-block is "Bali Sunrise" (also shown before) -- from a workshop I took in another life at the long-gone (and missed) Freckles Quilt Shoppe in Calgary.  It's a bit farther along than "Easy Breezy" due, in large part, to the fact that I have an elderly friend from church who I think might like it -- also lap-sized.  No, not the same friend who's received (and is thrilled with) the "Traffic Jam!" quilt.  There are just a goodly number of elderly people in my parish -- most of them women!  Anyway, I'd like to get it done in reasonable time so I can send it to her.  (It will be a surprise -- she doesn't own a computer so she won't even be able to guess.)
Here it is on the "design bed" thus far.  Two rows are completely together, with all hand-stitching done on the back as well (far left side).  Four more are joined by sashing and all of that hand-stitching is done, so the rows have to be assembled.  And three more rows need to be joined between the blocks etc.  You can see those on the right, with some of the strips cut for the sashing: 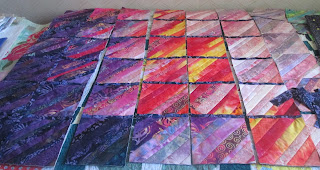 Each block is 6" square (without sashing) and there are 9 rows of 6 blocks each, and (so far) only an outer binding, not a border.  The sashing ends up at just shy of 1/2"...So the piece should measure in the neighbourhood of  40" x 60" (give or take) -- unless I make a QAYG border...we'll see!
In the "Long Forgotten UFO" category...this week, in my sifting, sorting, giving away and/or tossing practice, I came upon an unfinished little quilt top -- 30 1/2" x 40".  Another one of those "other lifetime" projects.  I do remember that it came from a magazine (haven't dug that out yet; it may be long gone), but I don't remember the name of either the publication or the pattern.   It didn't need much to finish it -- just to machine applique some of the 'leaf' shapes with a blanket stitch.  The spool of thread was even bundled in with it!  I decided to sit right down at the machine and 'git 'er done'.
The kicker?  The shapes were pinned to the top!  What was I thinking?!  Pause.  FUSE!  Once they were fused in place, I tested out a few blanket stitch options (I was using a newer machine and didn't want to set up the old one to do this), and got them stitched down.
I confess, I wasn't thrilled by the top.  I realized my colour choices, while decent, weren't stellar -- but clearly I'd gone into the project as an experiment and was using what I had to hand.  After time for it to "percolate", I decided it's "not bad" -- and will be turned into a tummy time blanket, with a prayer that it will be sturdy enough to last at least a little while!

Here's the top, in the sunshine on one of my garden benches:

Yeah, I know.  Not one of my best pieces...but in the immortal words of knitting guru, Elizabeth Zimmerman, "It will fit somebody!"  😉  In other words, some kiddo somewhere will lie on it, carry it about (like Linus from "Peanuts"), love it...and use it for a bed for their first pet.  And I don't care one whit!
As for "My To Do List"...this week's been challenged by the afore-mentioned COVIDiots...hence the phrase I've just finished as a reminder: 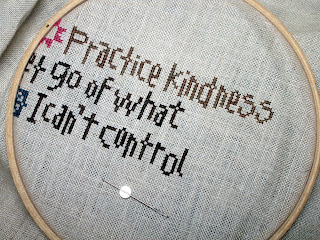 There's a bit of a floral motif that needs to go in that space on the right between "kindness" on the top and "control" on the bottom.  You'll have to wait till my next post (or two) to find out what that is.
And so, my friends, I leave you to stitch, walk, knit, spin, quilt, piece, applique, read, write, ponder...whatever little bit here or there helps you in these fast-evolving times.  I'm linking up (late as usual!) to Nina Marie's "Off the Wall Friday", wherein just 'showing up' is enough.
P.S. The Psalm for Morning Prayer today was Psalm 90...in which the psalmist prays "May the favour of the Lord rest upon us; establish the work of our hands for us -- yes, establish the work of our hands."
May the "work of [your] hands" -- incorporating your heart, mind and soul -- flourish this week.  I hope to "see" you again soon.  From Steve Bell, a Canadian singer-songwriter...(please ignore advertising, with thanks...)

great quilting projects. can't decide which I like best!