It's a Colourful Life!

This month is all about colour!  Gone (most of the time) are the grey days of February, and spring is definitely in the air!

This week I've found two bits of greenery poking through the leaf mulch on my garden beds, and was taken completely by surprise by a sprout on a plant I'd been over-wintering and had pretty much given up for dead!  I don't even remember its name -- I bought it at the Wal-Mart in Sylvan Lake late last spring, enticed by its glorious pink blossoms.

Eventually the blossoms died and it took the rest of the summer off, producing a few more blooms in the early fall.  I decided to see if it would last the winter and brought it in to my sunny back room (south-facing).  Eventually the leaves dried up and fell off, but I kept watering, having no clue if it would work...but it has! 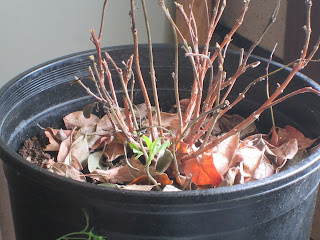 By the end of the weekend, with temps forecast as high as 8-9 C (high forties Fahrenheit), I'll have planted my seed pots to get a head start on a couple of veggies -- zucchini and broccoli.  (I still have some brussels sprouts seeds from last year but they're slow-growing and were attacked by those darned cabbage worms/butterflies -- so all I got was chewed leaves.  In the fall the deer ate those, and I didn't begrudge them!)

Aside from greenery -- and potential greenery -- I've been enjoying colour elsewhere in the house too.

Online I've been enjoying this year's SAQA Seminar* which is all about colour. The video interviews have been very interesting, and I've played around with a couple of the exercises, and had fun with the colour quizzes, which have engendered much conversation in the SAQA Members Only Facebook group.

*These Seminars have been an annual event -- usually in the fall or winter months -- free as part of a SAQA membership.

Of course, I continue to work with colour.  The "Traffic Jam" top is now finished, sandwiched and pin-basted -- ready to be quilted.  Here's the top out on my back stoop before sandwiching; it measures about 57" square:

I plan to quilt it fairly simply, with wide cross-hatching, and hope to get it quilted, bound and washed within a week or so, as I want to send it to an elderly soul I know in need of a wee bit of comfort following the loss of her husband a few weeks back.

Meanwhile, "Grassy Creek" is in the slow-and-steady assembly phase...with a couple of blocks and some sashing up on my design wall. 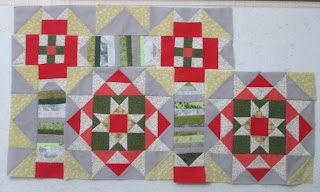 I'm finding it a challenge because -- as you might be able to tell from the photo -- the edges of the blocks appear to "run into" the sashing, and it's hard to find where one leaves off and the other begins.  Because of my tendency to get units turned around, I have to take my time, checking and double-checking as I go!

For play-time, I've been planning a few new art pieces (nothing to reveal yet; it's all in my head thus far), while playing with crumbs and strings.  I've a stack of 5 1/2" blocks composed of these scraps, all in blues, plus a growing stack of the same in the ever-popular "whatever the heck colour I have" variety.

And I've signed up to take yet another Quilt Freedom Workshop from Joe (the Quilter) Cunningham.  This Saturday morning I'll be studying "String Theory" with Joe and his friend, quilt collector and historian, Julie Silber.

To prepare for the class, and to make sure I had at least a few inches of space on my sewing table, I've decided I have to deal with THIS: 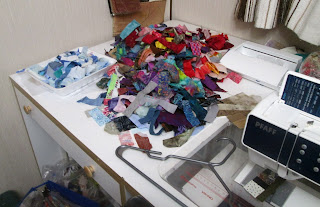 So...this morning I began to sort the longer strings by colour, putting them on hangers.  I began with the greens and greys, left from making the string-pieced sashing for "Grassy Creek" and followed that with purples, just because they happened to be there: 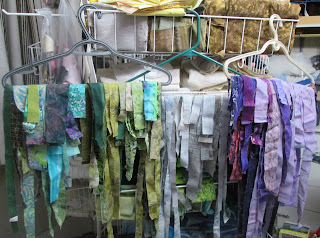 Next up will be reds and blues.  This sorting, though, won't include the Carefully Curated Collection of Strings in Assorted Colours that are stored below my ironing board... 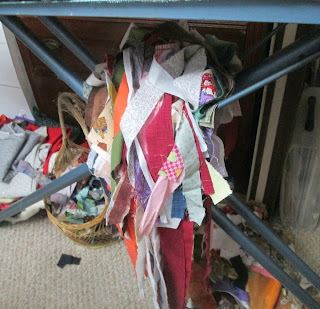 (Pay no attention to the piles of fabric or the basketful on the floor...😉)

There's still knitting, of course.  My March "Socks from Stash" have been languishing in favour of finishing the comfort wrap for my friend with cancer.  I'm on the last of five skeins of the yarn, an alpaca/silk blend, and it too needs to be finished and in the mail soon!

I'm still working (a bit) on the baby sweater for an expected cousin Back East (no news yet), and have offered to make socks for yet another baby boy (3 weeks old yesterday)...as well as a little guy who's now 4 years old, the son of a couple of bit Edmonton Oilers fans, who himself is gearing up to play hockey...

And then there's the impetus to dig out yet another UFO -- this one, barely started before it was set aside -- inspired by Kate Jackson's recent Last Homely House video over on YouTube, in which she, too, is sifting and sorting fabric and yarn scraps, with a view to (eventually) clearing it out...
There are several patterns for this sort of thing on Ravelry; I just happened to use this one, but have also used this resource from Georgie Nicolson, as I really appreciated the clear layout photo.  I'm making mine in sock yarn left-overs, using 3 mm needles (somewhere between a US 2 and US 3).  Like Kate, I prefer to use double-pointed needles for these squares, especially with this weight of yarn and working with only 32 stitches at any given time.  You can use any weight of yarn, of course, and adjust your needles accordingly. 😊

Anyway, I dug it out and started again...and will pick it up and put it down as the mood strikes.  Given it's in fingering-weight yarn, it will be a never-ending project...and that's just fine!

Tomorrow will be filled with the Quilt Freedom workshop, so I'd best get a move on and get the rest of that Pile o' Strings and Scraps taken care of.  It'll give me a better idea of what I've got to work with -- and more space in which to do it!

I'll leave you to take up your own colourful projects.  If you need more inspiration, I'm linking up with Nina Marie's Off the Wall Friday.  This week, her own colourful journey continues as she studies with the wonderful Rosalie Dace.  Have a great weekend!

Yes, colour. I can't wait for the dirty gre
y to be gone. You have colour overflowing for sure. nice quilts. I like Joe, too!!!

I'm exhausted just reading all you are up to, Margaret. You are such a generous soul with your projects for others. Your hanger system for organizing string strips is similar to how I handle keep some control over the strips I'm working with when piecing. I hang mine on a portal dryer rack.