It's February...and out here in central Alberta, that can mean grey, gloomy skies with "mixed precip" (read: freezing rain/wet snow/whatever else Mother Nature has planned).  It can also mean brilliant blue skies with colder temps and ice/snow on the ground.

In last week's post I showed you a wee bit of that sky in the pieces I made -- one of which has been sent off to Ontario for the SAQA Spotlight Auction at the MoSAiQA conference in "Trawna" in March.  I also taunted you with colour when I wrote about my yarn dyeing.

Well, then...here are the results of my test dyes with that 2-ply wool -- the original colour is on the left-hand side of the group, and the larger skein of crimson is the ugly gold over-dyed "Morning Haze" (no original photo). The underlying gold means that the crimson is -- in real life -- closer to a deep, rich wine colour than is shown in the photo: 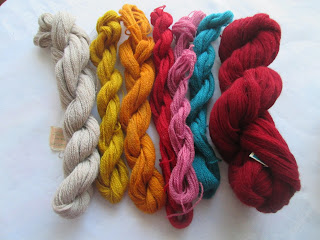 Can you say, "WOW!"?!   Old dye.  Old yarn.  Spectacular results!  I couldn't believe it!
I am thinking it'll make the most beautiful Fair Isle yoke on the sweater I've started...

That said, my artistic mojo remains a bit "so-so".  I've tried a couple of ways to re-ignite my creative fire.  First, I tackled a project that I'd begun a while ago, but which had been languishing.

I took a piece of painted wholecloth (done before Xmas), sandwiched it and quilted it...and wrapped it around an 11" x 14" x 1/2" deep stretched canvas...

It has an interesting texture -- in part because I painted the top layer when it was laid out on an old plastic remnant of a house blind..which left an imprint on the finished piece.  It is now waiting to be framed and put on display in the Lacombe Encore! Art Show & Sale in April.

It was a tough piece. It took me ages to figure out whether I'd quilt it by hand or machine. And the sunset?!  I'd painted it but the paint didn't fully cover its space...so I painted over that -- and it became gaudy and ugly. What to do?!

First, I added some of the gold/bronze metallic fabric paint (Lumiere from Jacquard) to the sky and the landscape.  Then I took a light emory board (truth be told, an AVON nail file!) to the sun shape itself...burnishing it, if you will.  I think the framing (in a black floater) will set it off best.  Stay tuned for a new photo.  😊

Next, I signed up for the "100-day Creative Challenge" on the FB page that SAQA has set up specifically for it.  Next...well...I made no promises about actually finishing anything during the 100 days -- though I'm pretty certain I will.  I just decided to make my posts about process and if I get something finished, I'll add that to the page's "Album" for this go 'round.

I began by casting on a sock -- the February Challenge for "Socks from Stash" on Ravelry.  The January Challenge was to make a pair using some of the oldest yarn in your stash, so I came up with these, in a yarn I know I bought over 10 years ago at a shop in Calgary:

February's Challenge is to make a pair using yarn given as a gift or bought because you couldn't resist.  I'm using remnants of a skein given me by my daughter, and one I bought a few years ago at a local festival, simply because I couldn't resist: 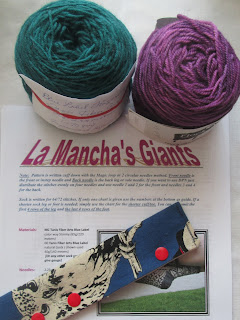 The pattern is complex, but addictive.  I've finished the cuff and am 10 rows into the 44-row leg pattern.  Stay tuned!

For the 100-day challenge -- in addition to the new socks -- I am working on a trio of small-ish art pieces.  To prepare for them, I dyed some Kona cotton.  But not with my usual Procion MX dye -- given that all I have left in the way of blue is turquoise.

No.  I bought a few packets of Dylon before The Shop closed its doors on Saturday -- and experimented with LWI (Low Water Immersion) using it -- and the help from a tutorial I found online.


Though the top piece turned out darker than expected, I'm pretty sure I can use it as well as the other two -- and I have the better part of each packet of dye powder left, so there's more experimenting in my future.

This will be on my agenda for work tomorrow.  Tuesday, Wednesday and Thursday I'll be in what used to be The Shop, taking inventory and packing yarn.  It's store-front closed last evening at 6 p.m. (Mountain Time)... the end of an era.  There will be an online presence soon and in the spring, a shop-on-wheels...but it won't be the same.

Wishing you all a good week...till next time...I'm linking this to Nina Marie's Off the Wall Friday.  While I've been snug here at home, she's been exploring Erie, PA...inspiration for new work!