Yes, and we're well along.  We've had snow -- thankfully now gone -- but even though now the days are mainly clear and sunny, there's an edge, a sharpness, to the air.

I've put much of the garden to bed -- bringing in my geraniums (pellargonia) to over-winter, and transplanting my basil to a pot in my kitchen window, where it is growing new leaves and seems very happy.  I've cleared out the lettuce, cut back the mock orange and the rhubarb, put away the 'burner' and plan to put away the faux wicker bench this weekend, as it's far too cool to enjoy at any time.

On Wednesday, with my "every 8,000 km" maintenance service, I had the winter tires put on my car.  I've cleaned the car's interior and swapped the "spring/summer" mats for the "fall/winter" mats.  And I bought a small cordless electric snow blower because...well...I will have more sidewalk to clear once I get title to the lots next door.  A few days ago the lots looked like this (that's the east wall of my house in the centre-right of the photo): 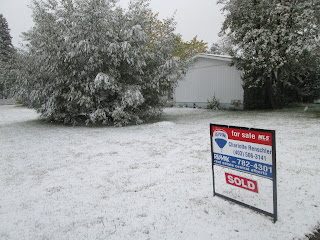 This morning, the young man charged with mowing etc. showed up for one last cut-and-mulch (paid for by the vendors), and we talked about what I might do with the trees -- especially the willow.  I am going to start to clear out 'sucker' branches in a couple of weeks (I take possession October 24) and will finish up in March before the sap starts to run again if I have to.

Meanwhile...I've been working on a variety of things.


In addition to the lovely phone message I received from my client about the Wall-to-Bed quilt (aka Prairie Quintet), I got this photo from her nephew: 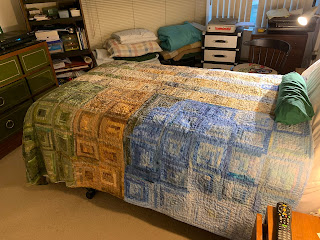 Yes -- just as she wanted -- the 3 "main" trees and sky etc. are the focal point on the top of the bed; everything else hangs below.  I'm just happy that it fits and it was exactly what she wanted!

That said, the most gratifying thing I've done lately is something that completely came out of serendipity -- and out of history.

Dad met the painter -- Wadim (or Vadim) Dobrolige, a Ukrainian -- in one of the three camps over which my father was employed by the British Army of the Rhine (BAOR) to manage.  I believe that when they met, Dad was still a Captain -- a member of the Black Watch of Canada, Royal Highland Regiment, seconded to the British military government for most of his WW II service (1944 - 1946).

Anyhow, my father became a fan -- a patron, if you will -- of Mr. Dobrolige, who was then in his very early thirties.  Dad bought several of his paintings, and brought them home after his war service ended abruptly (through illness -- a reported heart attack -- in 1946).  I grew up with these paintings in our family home and in the home of my godmother, Georgina A. Davison (aka 'Nina').

When my mother and step-father retired to the Okanagan from Quebec and down-sized, I acquired some of these paintings -- and a couple more when Nina died in 2004.  When I lived in Calgary, there was one in our dining room one over the stairs to the lower level of our home, and one over our fireplace.  My sister has one in her home too.

When I moved to Mirror, I had far less wall space -- but one of the paintings hangs in my guest room: And one is now in my living room here -- a small one of trees against the sky, which reminds me of what I see whenever I look up the street from my home.  In Mirror, all the streets seem to end in trees.

A few years ago, I tried to track down the artist.  I found out he'd emmigrated to Edmonton, Alberta in 1948 (aged 35), and had become somewhat celebrated.  Of the Ukrainian Orthodox faith, he'd created several religious paintings and iconostasis for Edmonton and area Orthodox churches.  I inquired of one -- located a mere 10 blocks from my daughter's home -- if I could make an appointment to see the work, but was rebuffed by total silence -- both from the clergy and the elders.

A couple of months ago I tried again and found a link.

It turns out that in recent years, Drs. Peter and Doris Kule donated funds for the founding of the Kule Folklore Centre at the University of Alberta, Edmonton.  It's a research centre and link to the Ukrainian Canadian community in Alberta.  The current President of the Friends of the Ukrainian Folklore Centre is Natalia Toroshenko (nee Dobrolige).  Yes; she is Wadim Dobrolige -- the painter's -- daughter.

And this year, the Centre is producing a short video featuring three Ukrainian Canadians who have impacted their communities and beyond -- and one of them is Wadim Dobrolige!

I made a connection -- and it excited those who received it.  I met with three associates of the Centre on Monday -- and gave them five of the eight paintings I have, all painted by Mr. Dobrolige.  I agreed to be interviewed and video-taped for the Project, which features those community contributors; the video is due out near the end of November.  I won't be seen much, but mine will be the voice-over for the Dobrolige paintings I've given to the Centre.

Here are the five I am leaving with them at the moment (two of which were wrapped by the restorer/cleaner and were of such a size that I left them that way for the photos): 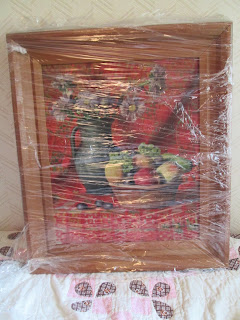 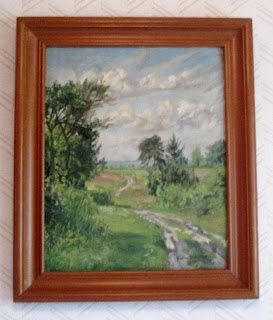 The staff at the Centre affirmed that the brown wooden frames around several of the pieces appeared to be the original European frames.

Once the video is finished, I will be notified.  There are tentative plans for a reception for the release of the film, and with those plans, a hope that Natalia and I might meet.  I also hope I will have my children with me to share this occasion.  (It would be in Edmonton in early December; prayers to Mother Nature to cooperate for travel are appreciated!!)

Well, Wednesday I bought two new canvases -- of a different shape than I've tried before.

And...today I mapped out on paper and on clear plastic (remnants from my daughter's office laminate machine) my sketch for my entry into "Colour with a 'U'" -- the (so-called) 'regional' All-Canadian exhibit destined to open at the March 2020 SAQA Conference in Toronto (first one outside the U.S.)

That subject (i.e. my process etc.) is an entirely different post...so...stay tuned.

Meanwhile I leave you with Happy Thanksgiving wishes -- for all Canadians celebrating here this weekend -- and prayerful thanks for not only my Canadian readers, but all those Gentle Readers in the U.S. and around the globe.  I am thankful for each and every one of you!

Linking to Nina Marie's "Off the Wall Friday"...and praying mightily for the U.S. -- my friends, my family there and the entire populace...

Email ThisBlogThis!Share to TwitterShare to FacebookShare to Pinterest
Labels: catch up, Colour with a U, Off the Wall Friday, Wadim Dobrolige

What a gifted person you are, with a high sense of integrity. Thank you for taking the time to do this research to honour our Canadian history and those who contributed to our art🙏🏻

What a wonderful story! It is great that your paintings will be seen by a much wider audience, and that you can share how you came by these.
Happy Thanksgiving.

Wow! What an interesting turn of events surrounding the Ukrainian painter. That is awesome!

Your string quilt blocks are wonderful! And I love the wall to bed quilt is gorgeous!