The Tale of Two Quilts: Editted to Update!

When I posted last week, I was pretty frustrated...but my frustration had been soothed by some wonderful news (click the link to find out what).

And...it would seem that that news was just enough to get me to pick myself up, dust myself off, and keep going. 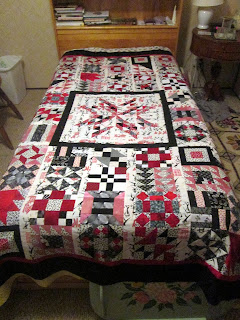 And everything I'd done by Wednesday night hadn't improved it:

In my last post I mentioned getting colour catchers -- specifically, Shout Color Catchers -- but you can't get them in Canada, unless you order through amazon.ca, and I'd no time for that.  So...at The Shop on Thursday (July 18) I picked up 2 boxes -- 2 envelopes per box -- of Dylon SOS Colour Run.  I used them both, following the directions...and managed to improve/remove the pink from some of the whites but that one fabric -- that one with the black figures on it that comprised the background of the centre star and all the sashing?  It stubbornly refused to budge.

What to do?  I gave up.  I dried the **@@!! thing and put it in the mail to my nephew (it was his birthday gift) with a letter of explanation and the hopes he'd still like it.

I thought hard about what red fabric could have caused the damage and concluded it was likely the newest one: the backing/binding -- even though it had been washed before using, just like the other fabrics.

I did a test with a small strip of the stuff in a sink of hot water and Blue Dawn...

As I still have quite a bit of this left over (who doesn't, after using 108" wide backing for a twin-sized quilt?!) my plan is this: soak the remaining fabric in Retayne, dry it, then test again.  I'll keep you posted!

Thus ends the tale of Quilt #1.

There was nowhere to go but up, right?

Quilt #2 is, of course, the Wall-to-Bed Project, which I am pleased to say is humming along nicely.

It's gone from this to this...

And here's how it looks when tested on the 'twin extra-long' bed in my guest room:


At last I was able to send my client another up-date.

Now I'm contemplating how to finish the sides.  The bottom is straight-forward as is the right side...but the left (the 'tree side')?  I'm thinking about adding two more trees with background in between, to take it to a drop of 16" (finished).

The right side drop is about 7" so only needs another 9" to finish it, while a full 72" W x 17" L strip needs to be created of trees and grass in order to finish the bottom and bring the entire thing to a finished size of 72" W x 86" L.

The thing is, I have a deadline for this piece -- the sooner the better! -- because my client turns 99 in October.  Whoa!  And I want to ensure that when she eventually passes on (the later the better!), should one of her heirs want it, and want to hang it rather than sleep under it, there's some artistic merit to the entire piece, that it's consistently designed, even though it's meant to be utilitarian.

SO...off I go to contemplate...leaving you with a link to WIP Wednesday over at the Needle and Thread Network, and soliciting any ideas you might have about that left side!  Have a great rest of the week!

ETU - Saturday, July 27: Preparing to work on the last of the right-hand side of this quilt later today.  Meanwhile -- because I still can -- I'm also linking to Nina Marie's Off the Wall Friday.  Have a great rest of the weekend!

I have heard that " if y?out are not having a good time, at least have a good story." Your nephew's quilt has a story.

Meanwhile, your tree quilt is awesome. I am sure your client will love it.

Ya do what ya can and... I think the red/pink tinge doesn't detract. And your second quilt is amazing. I REALLY like it!

You are amazing and by the grace of God, a careful thinker and patient being who can stand the heat and come out of a stressful situation with all due and beautiful finesse. I am sure your nephew will love the quilt.

For the future, Dr. Beckman's (available at Metro stores here in Ontario...)
I get mine from Jane Stafford where I buy a lot of yarn for weaving. She has used ALL of the colour catchers and says this one is worlds above the rest! And she sells all hand-dyed yarns from her weaving studio on Salt Spring Island and refuses to sell yarns that bleed! Every Orser gets a sheet in their shipment and I order by the box...