First Snow of the Year

I'm pretty sure that most kids who live where there's snow in the winter look forward to that first one -- at least in part because it's a change from spring rains, summer heat and autumn leaves. 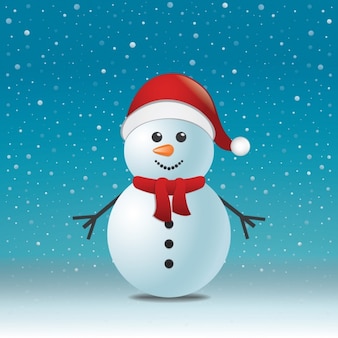 Parents -- at least based on my own experience -- have mixed feelings about it. If the snow is wet and heavy -- also known as "snowman snow" -- it can be great fun for the kiddies, but a heckuva thing to shovel (if it shows signs of sticking around for a while).  And then...there are icy roads to worry about as we get ourselves -- and perhaps our kids -- from one place to another.  Not fun!

And when that first snow arrives unexpectedly early -- rather like a house-guest who invited him/herself at short notice -- the First Snow of the Year can be distinctly distasteful.

Especially if, like I was this year, you're away from home when it begins, have to drive home a long distance through it, and have no small children at the other end waiting to enjoy it.

This year, in these parts, the snow arrived Saturday night -- a wee bit before the exact time of the Fall Equinox.

I arrived home late that evening from a long drive in freezing drizzle, rain, fog patches, dry patches and (yes) snow, to find this: 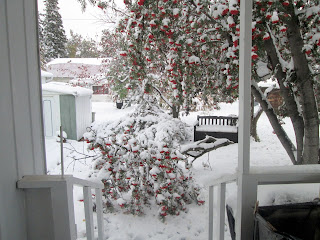 That's a large branch from high up in the Mountain Ash (Rowan) tree next to it.  The photo was taken this morning from my back stoop.  Blessedly, the branch missed the roof of the stoop and an overhead wire (I think it's the phone line) you can't see from the photo.

Later this afternoon, when some melting had begun, I was able to go around and clear snow off the other (undamaged) shrubbery.  The downed branch looked like this: 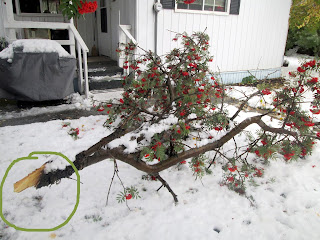 The highlight at the bottom left is to give you an idea of the size of the break.  Here's the other end (as close up as I could get it; again, I refer you to the circled area: 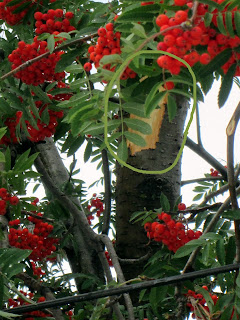 It's 'way up there in the tree, and yes, that's the wire it missed that you see running across the bottom of that photo!

My neighbours had some damage to one of their aged willows, but all in all I must admit that -- compared to folks in the southeastern U.S. coping with flooding, and folks in the Ottawa-Gatineau area in Eastern Canada handling the aftermath of tornadoes (!) over the weekend -- I have much to be thankful for.

Still, I don't think this First Snow of the Year -- 2018 Edition -- was quite what Hawksley Workman was getting at with his song...


(with thanks for Jason Hammond and You Tube for the video.)
Posted by Margaret at 2:26 pm

Amazing Marg... Just wind, cold and tornados near Ottawa - we got the tail winds - about 80mph all night Friday. We have not been blessed with any snow. What a great shot at missing the wire and stoop that branch managed!

Thanks for the tune - good fun!
Bethany