"All About Them Books"

My colleague, Mary, and I delivered our pieces to the Camrose Art Walk on July 16 -- the second half, in which we're showing, opened Tuesday (July 24) -- so since then I've been doing a variety of things, not the least of which is a throw-sized "Bookshelf Quilt". 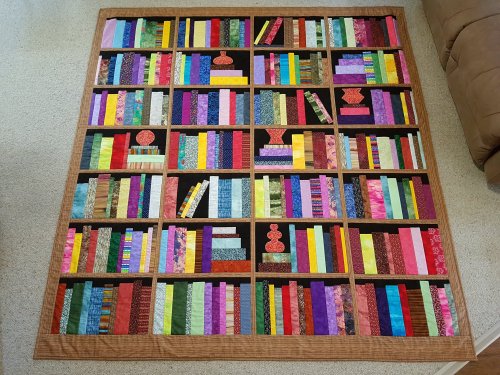 A childhood friend of mine -- we reconnected via Facebook a few years back now -- saw one (probably this one) online and asked (she, doing nothing of this sort of stuff, though I swear we took Home Ec. together!) if I would make one for her.  Not too big -- just throw-sized.  That's about 51" x 64" -- give or take an inch or two.

Well...she's a kinda special gal, so I agreed to make it but cautioned I'd track my time and would charge her for that and for the materials.  I knew I could use my scraps for the books, but there would be new fabric needed for background, sashing (the "shelves) and backing. as well as batting for the quilt sandwich (I don't worry about thread in terms of costs).  And I used the pattern from the link above, designed by a gal named Victoria, who is part of the "Fabric at Work" trio, and who offered it free online.  Thanks Victoria!  😊

Turns out that the blocks I've developed (this is a fairly loosey-goosey pattern) are 9" wide (unfinished) but with sashing, five blocks across, 4 sashes and 2 sides-of-the-shelf should make it.  Ditto for six blocks (9.25" tall, unfinished) down, with a top and bottom (3.5" and 4.5" unfinished, respectively).

I'm planning to keep my friend's costs down by quilting it myself -- 'as you go'.  That is, I'll quilt one row at a time, and join it to the others with the sashing method that works so beautifully.  I did this with the Wedding Quilt: 'Dreaming of Japan' that I made my son and his wife two years ago...

I've now (as of this writing) finished 25 of 30 blocks.  All of the "novelty" blocks -- ones with knickknacks or stacked or leaning books -- have been finished, so what's left are "plain books".

Last evening I realized that I've only enough 'book' fabric cut for another 2 or 3 blocks, so will have to cut more for the last few.  Blessedly, I have enough scrap fabric (go figure! 😉) with which to do that! LOL!

So...that's today's project in the forecast heat (28 C +/- with the humidity -- yes, even on the prairies): make the last few blocks and start to cut the "shelves" (top, bottom and sashing).

Here are some progress photos so far:

I began by cutting the book fabrics -- 1.5" to 2.5" wide and 8" to 10" long -- and attaching them to a large swath of black background fabric.  (The background has tiny text on it in grey that I think is really cool!)

Then I sliced off each piece and divided them as to size: 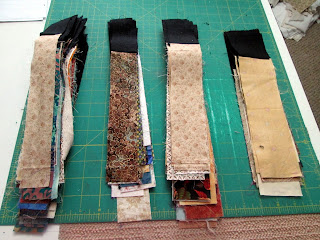 Next I began by creating the blocks and putting them on my design wall:

Once I filled the design wall with blocks, it was time to move them to the "design bed" in the guest room!


I am trying to lay it out so that there's not a concentration of either the 'novelty' blocks or the 'regular' blocks in one place.  Rather, I want to have the former distributed relatively evenly throughout the quilt.

Here's a close-up of a couple of them -- a 3-D photo frame in which my friend will be able to put any photo she wants, and switch it out any time, or remove it for washing; and a vase of Brown-eyed Susans, which she said are a favourite flower:


I'm hoping to have the arrangement of the blocks finalized and the sashing at least underway before I go back to work on Thursday. So...off to the studio!  But not before I link this up to Nina Marie's Off the Wall Friday.

This week she's been at her Annual Quilting by the Lake art retreat, which I find so a propos, because on Friday coming up, I'll be leaving to spend the "August Long" weekend out of town at the home of friends.  It's our Almost Annual Art Play Weekend, and I'll be taking dye stuffs made at Olds Fibre Week, and organic cottons bought at MAIWA, and...a sketchbook and paints and perhaps some small canvases that need skies...and...and...

And so till next time, Gentle Readers, I hope you all will have similar lovely opportunities to take time to play with your art!


While I "hit the books", here's a little musical inspiration...

Email ThisBlogThis!Share to TwitterShare to FacebookShare to Pinterest
Labels: All about them books, Bookshelf Quilt, learning to play, making art, Off the Wall Friday

You are one amazing friend Marg, and nope, you won't get a request from me, but I do love the little SAQA piece I have of yours and could collect your art ANYTIME! So beautiful of you to do this huge job... bless you!
bethany

What fun. I have seen quite a few of these over the years, but yours may be the biggest bookshelf, I've seen.

Margaret, your bookshelf quilt is, in an overused word, wonderful. Truly. I had to go through a few posts to find said quilt top...and in the meantime our supper has overcooked, LOL. Love ya...Annette