It's All Worth It (Long, But LOTS of Pictures!)

I'm talking about the 'bit of a slog' that I came through recently (and not for the first time), as well as the ongoing learning curve(s), the disciplining of The Voices (you know: the ones who ask you repeatedly, "Who do you think you are?").

It's all worth it.

In the month (!) since my last post, I've taken two workshops, visited several galleries, enjoyed a local quilt show in the company of a friend who's a new quilter, and finished the last five pieces for my contribution to Inspired by Scotland, my collaboration with SAQA colleague and dear friend, Mary Wilton, which opens at the 2018 Camrose Art Walk on July 24.

There's been travel and fun, and hard work, and education, some disappointment...and a couple of wonderful surprises!

Where do I start?

The first one I tackled turned out to be the most unusual (I think).  Part of the Scotland series, it was inspired by a photo I took out of a window at Hill House, built for publisher Walter Blackie and located just west of Glasgow -- one of Charles Rennie MacKintosh's most wonderful achievements: 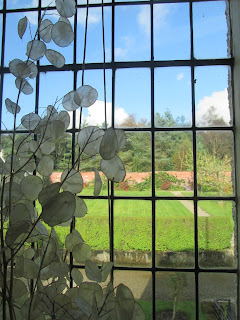 I had a vision of how to do it that involved both piping (for the leaded glass) and a three-dimensional effect of the plant inside on the window ledge.

First, I auditioned the fabric and created the background, which I sandwiched and quilted: 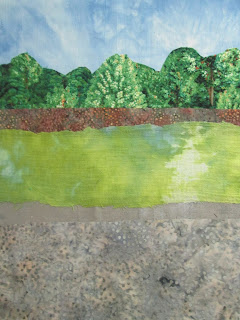 I learned a great deal putting this together...because my sewing machine absolutely refused to rejoin sections if I insisted on using piping for both vertical and horizontal leading.  In the end, I used it for the vertical -- and bias tape for the horizontal.  Here's how it went:


The lines of stitching you see in the photo above are the guidelines for where I cut the fabric -- yes, top to bottom! -- to insert each line of piping.  This process meant there were seams of piping on the back.

I created the 'blossoms' for the plant by layering organza with water-soluble stabilizer (Sulky brand), stitching each shape twice with silk thread, and cutting them out individually before soaking off the stabilizer.


Here's how I dealt with the aforementioned seams on the back: I covered them up by stitching a piece of craft felt over them (by hand). 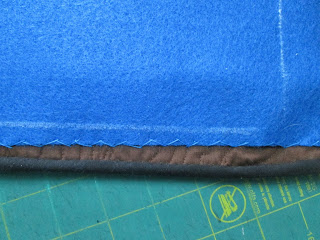 See the white lines on the blue craft felt?  Those were my guidelines for mounting the piece onto an 8" x 10" stretched canvas, coated with matte gel medium.

After consulting colleagues on the SAQA Members Only Facebook page, I took the plunge and mounted the 10"  x 13" piece (bound with a narrow black bias binding to match the other "leading") on an 8" x 10" canvas:


Here's the view from the side: 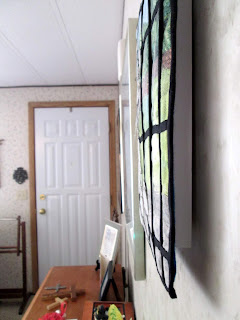 Of course, the piece will be wired to hang properly -- in the photos above it's just perched on a nail on the wall of my living room!

The next was a piece based on a close-up photo of a bit of mended wall at Stirling Castle -- the wall of one of the weavers' studios, as I recall: 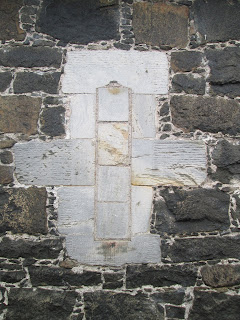 I won't go into detail about my process for this one, save to tell you it involved cutting up a lovely batik into very tiny pieces and applying them to a white fabric substrate that had a fusible web coating (see below). 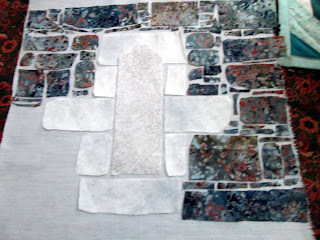 I then sandwiched it, quilted it and -- using a technique similar to that described above -- mounted it on unpainted stretched canvas.  Here is is before framing:


At this point I took a break and went off to Olds College for a couple of classes at Fibre Week 2018. The first day was a long one -- dyeing fabric and yarn with plants and mordants -- and lead to one of the surprises I alluded to above.

On the second day I took a needle-felting (with some wet felting) class with a delightful instructor -- Lois McDonald-Layden -- who'd travelled from New Brunswick to share her vast knowledge of the subject via a variety of felting classes.  (I took only one but found myself surrounded by disciples who'd taken some already and were about to take more.)

I wanted to recreate -- or create an impression of -- this plant I'd photographed in the gardens at Clan Donald Centre (Armadale Castle, Skye): 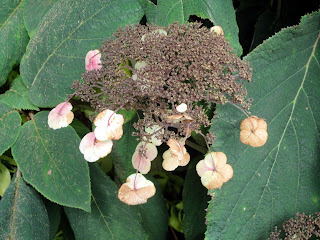 P.S.: If any one of you, Gentle Readers, knows the name of this plant -- would you let me know?  Thanks!

We began by making our own "pre-felt" foundation -- layers and layers of merino top/roving, needle-felted together, gradually incorporating colours from our chosen background. 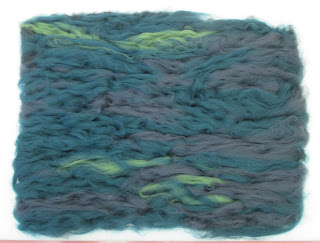 We then added more material -- different types and forms of wool -- to the surface to create a design, and needle-felted it securely: 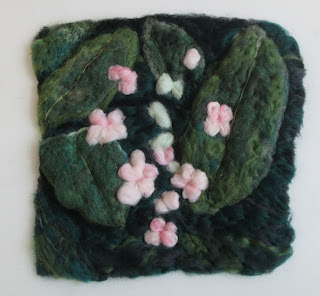 At this point it was ready to be "set" by wet felting.  This we did by rolling it up in layers of small-bubble bubble wrap, inside a towel, around a pool tube, and rolling it back and forth much as one would roll out pastry for a pie -- but far longer and more aggressively!

Once home, I began to add the quilting I wanted, to give it definition: 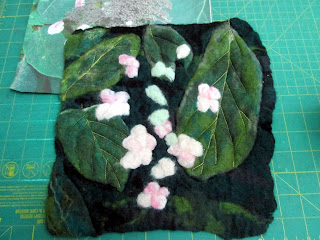 And then I added embroidery: 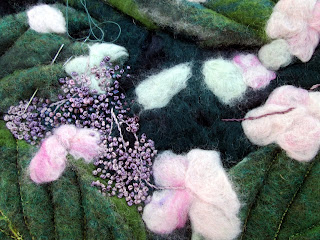 I continued with the embroidery, enhanced by beading, until I had it the way I wanted it.  I steamed it a couple of times with my iron (from the back) and then mounted it on a stretched canvas painted black, with some hints of dark green:


Fourth piece?  Back to canvas, and another landscape, based on a photo taken on the road from Edinburgh to Eilean Donan Castle, early in our trip: 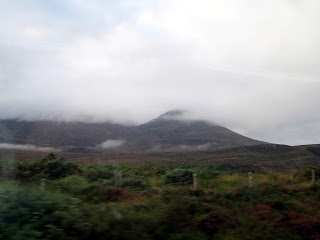 I began by painting the sky on the canvas, and then auditioning and shaping wool felt, which I layered and stitched together with machine quilting:

And here's the finished piece, photographed (rather poorly!) before framing.  Yes, it has a needle-felted foreground, and some whisps of roving applied directly to the "sky"...

I decided to end the series with a 'soft' piece -- that is, one not mounted on canvas but hung with a sleeve -- and it's a miniature of a piece I finished in 2014 entitled "MacKintosh's Garden: Hardy to Zone 3".

Here it is on my design wall, to the left of the original: 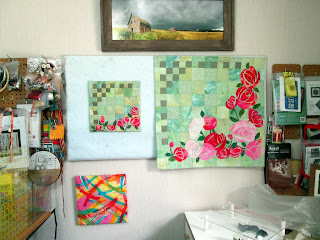 And here is a detail shot: 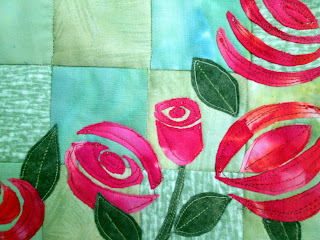 I was blessed to have several of the fabrics I used in the original, so I incorporate them with new ones for this little piece.  The pieces each feature grids and the Glasgow Rose, both motifs associated with the work of CRM and his wife, Margaret.

"So what were the surprises?" you might be wondering.

Well...when I knew I was going to Olds, I set up an appointment with the owner of a gallery there, where I have several pieces on view.  I've dealt there for several years but this owner has only been there for a year.  I rushed to get to the appointment -- which she'd confirmed by e-mail earlier in the week -- only to find the place locked up tighter than a drum.

But...I'd spent that day in the dyeing class with a gal who just happened to be the owner of Points North Gallery -- a well-established frame shop and art gallery in Fort McMurray.  When I shared this with her...one thing lead to another and she looked at the pieces (four of them!), took them back to "Fort Mac" with her, and now a contract has been executed...and all is well!

Next...just last week I found out that the piece I'd "slogged" over -- "Incarnation to Resurrection..." -- was accepted into the SAQA Juried Show, "Season After Season"!!!  My daughter will be picking it up to take better photos -- for publicity purposes -- and I need to make a larger sleeve (5" instead of 4") and a new label (address included etc.)...so there's a bit of work to do there yet, but I'll have it ready to send by the end of August and it will go up in the exhibit at the Texas Quilt Museum in January.

This is my very first SAQA International Show (My Corner of the World: Canada is considered "Regional") -- so I am over the moon!!!

The last bit of news is that a small piece -- "In Green Pastures" -- has sold at my friend Kayleen's In Spire!  Boutique Yarn and Gifts...

And on that note, I've pretty well exhausted both of us -- writer and Gentle Reader -- so I will close, with wishes for a Happy Canada Day to my compatriots, and a link to Nina Marie's Off the Wall Friday.

May your week be lifted into light and creativity, wherever you are!

Email ThisBlogThis!Share to TwitterShare to FacebookShare to Pinterest
Labels: Inspired by Scotland, Off the Wall Friday, Points North Gallery, Season After Season

Quite a busy month for you, Margaret! I absolutely love what you are doing with your felting! I see the Scottish countryside being expressed so well with its use. And, of course, more congrats on your show acceptance!

Missed your blog, glad you are back.
Thrilled to see that you were not caught in the mental limits some deal with when thinking of ' working in a series' - the inspiration provided the focus and not methods. The results interests the eye, engages the mind and inspires the artistic muse in others.
Congrats on SAQA entry acceptance.

Great post Marg - you have certainly been busy! Lovely new work and I particularly love #3. Congrats again on Incarnation to Resurrection - such a very special piece.
Bethany

Wow Margaret you really have been busy, and all of your finished pieces are lovely. I like the way you have mounted your larger pieces on slightly smaller canvasses; I may look into how that’s done. Congratulations on your success in getting your your exhibiting opportunities sorted out and on your sales.
P.S. the plant you asked about is a Fairy Hydrangea (an apt name I think for a beautiful plant). It is one of my favourites.

So much good news here! Your work is just getting better and better. The Window piece is fabulous and I love your solutions to the issue with seams as well as your hanging solution. I adore Blossoms-I would love to see it in person with all those textural French knots. So thrilled for you that you are in Season After Season! Your years of hard work are really paying off.

I am catching up on my blog reading. Time spent at the cottage this week means we have no access to the Internet unless we head to the town library. Wonderful to be unconnected but it is a bit of a catch up process when you arrive home.
Wonderful blog post. Congratulations at all the successes.
But even more at putting the time in and courage to just try! Success by the worl standards is public recognition. But I thing recognition to our selves of the showing up is better. Just this weekend a local regional show I help at and volunteer for sent out their acceptances. Several friends and myself have entered and had work in the show. This time round many that I know have not had even one piece accepted ( including me) And some of these are really good artists who teach provincially. Entries are a fickle thing.
We should celebrate the courage to enter. The courage to keep trying. And the courage to show our work. It is a part of us!
You are one courageous lady!
Jo