It's All About the Math

Time and time again I hear a groan from customers at The Shop -- usually when I begin to explain 'gauge' (aka 'tension') and how to calculate how much yarn you might need if you're substituting one brand for another.

I've heard this before from quilters too.

It may be tough to swallow, but it's true.  Knitting, crochet, sewing, quilting, cross-stitch...all involve math at some time or another, but most particularly in the planning and/or design of whatever the project.

In my recent art piece, Oh! Those Highland Hills!, in addition to figuring out how to fill a 10" square space, I needed to get 'right' the proportion of the sky to the foreground.  On the left side (below), you see the full 10" of the edge of the piece...and on the right, the sections split into painted background (sky/mountains) and fabric foreground. 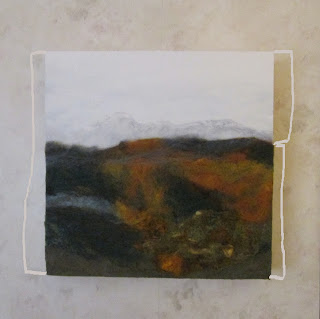 These proportions were intended to mirror those in the original photo -- which I first had to convert from a rectangle to a square... 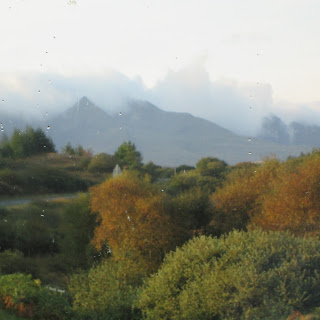 ...but as you can see from the above photo, I decided to play with that a bit, and the foreground is a bit "deeper" in the final piece than it is in the inspirational photo. Yet I think it still "works"!

This week I turned my hand to the commission to which I referred in my last post -- a set of large pillow shams -- and as a result got myself involved in a whole lot more math.

The inspiration for the work was found in this quilt that I came across (done in a couple of different colour-ways) at the Sylvan Lake Quilt Show this summer:


The pattern is entitled "Labyrinth", which I tracked down to Janet Wickell at a post from "The Spruce".  The pattern released me from the need to call on the Team at Math-Net to solve the mystery of how it was assembled, and boy, am I grateful!  😉

As an adjunct to the pattern, I printed out the photo of the inspirational source as a full 8" x 10" and then focused on translating the centre square into the size I'd need -- before borders.

The 'centre square' is actually composed of a centre block -- which I calculated would have to finish at 12" -- and two outer borders.

I broke that block down into its components per the afore-mentioned pattern, thus:


I then added the first Labyrinth border...


Altogether, the Centre Square is 24" x 24" (not including seam allowances).

This now needed to be converted to a rectangle to complete the top of the first sham of the pair, measuring 36" W x 26" L (not including seam allowances):

This needs to be quilted before the back and decorative "flanges" are added.  I have enough batting on hand, but need to get a light-weight fabric for the back of the quilt sandwich.  (Regular-weight quilting cotton would make the sham too bulky.)

Thus, this weekend, I'll assemble Sham #2, and next week, go in search of that backing fabric!

For today, though...well, I'm due to limber up with a brisk jog, and then will spend some more time on my contribution to the SJSA project.  Block #2 of seven is just about finished!

While stitching, I think I might just pop over to Nina Marie's "Off the Wall Friday" to see what everyone else is up to.  Won't you join me?

Love your 'sham' Margaret but, oh, my head spins at the math involved! Great amazing job!

LOL, next time I need to figure yardage on yarn I'm emailing you. It never comes out right for me....yes, I am hopeless with numbers.

I am math challenged!!!