It seems that blogging has become a 'Sunday-kinda-thing' for me lately.  ;-)

I've been home from Scotland just over two weeks now and finally -- for the most part -- I seem to be 'back to normal' (what 'normal' is for me, that is).  The jogging has been a challenge -- sluggish and slow -- but I persist!  The weather's been pretty good this past week, so I've pushed myself to go out and plod along.  There are a few 'Scottish pounds' that have to be removed!

I must admit I took it slowly and started back in the Sewdio with a commission I wanted to finish by Thanksgiving (Oct. 8-9 here) so I could save shipping costs.  My sweet sister has a dear friend (I know her too) who's becoming a Young Great-Grandma in November, so sis commissioned me to make a crib quilt in a rail fence -- in a selection of blue fabric because, apparently, the baby is to be a boy.

Here is the top when I finished it just before my trip: 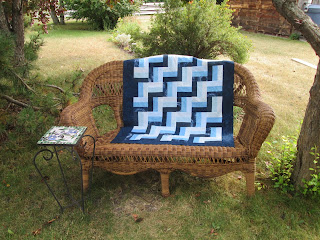 Here it is just after my return -- sandwiched and ready to quilt: 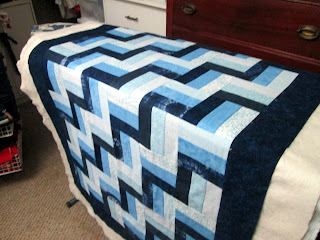 And here it is, finished -- full front and back, followed by detail shots: 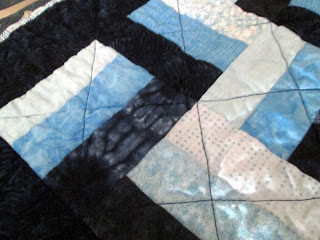 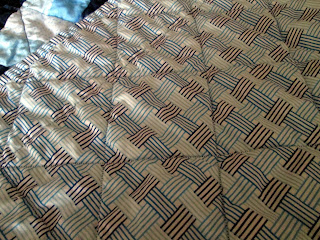 I really lucked out with the backing, which I also used for the binding, because I found it at Wild Flower Creations, the LQS in Lacombe -- on the 50% off table!  And doesn't it echo the Rail Fence motif perfectly -- in 4 shades of blue, no less!

Primed for the Next Step

Once I had the quilt finished -- using my trusty back-up machine, a Pfaff 1222E -- I was ready to move outside my Comfort Zone...to meet a deadline.  I picked up my Husqvarna Lily 555 from the "spa" (Red Deer Sewing Centre), put her back into her sewing table and moved forward...

This past year I joined the Alberta Society of Artists as an 'Associate Member'.  I have no idea how many textile artists there are in this fine organization, beyond two SAQA colleagues -- Barbara J. West and Ilse Anysas-Salkauskas, both of whom have BFA degrees and are Juried Members of both the ASA and SAQA -- but I figured it would be an interesting group to join.

It's been a while since I surrendered my position as a Co-Rep with SAQA, and I was ready to do a tiny bit of volunteering, so I offered to participate in a fund-raiser: "100@100" -- where 100 artists volunteer to produce a piece of work on a 10" square wood panel, to be sold for funds to support the organization.

You may recall that I picked up my panel from President Mail Doktor just before I prepared to leave for Scotland.

Thank goodness for the trip, but...when I got back, I had to think about it.  Get back to the idea of trying to do something with an 'artist's panel' or 'artist's board'.

My dear provender of mats and frames, Andrea Hatch at Cabinet of Curiosities in Stettler, got me a large piece of 'board' which I cut in two (badly, because I don't really have the right equipment), and upon which I began to play.

I knew I needed to prepare the wood with gesso so that it would be sealed, and not damage the fabric I planned to apply to it...so I painted one coat on an almost 10"-square section of the board.  I was inspired in part by the work of the wonderful Louise O'Hara from Northumberland, UK, whose work I first discovered in a tiny shop at the ferry dock at Malaig, Scotland.  I bought a card with this image:


She does work with textiles and paint on board and canvas...which thrilled me to the core...and so I persisted.

Inspirational photo (above -- the second one I'd tried) in hand, I tried painting with acrylics on the sample board I'd prepared...and failed miserably.  It was stiff and stylized and not at all what I wanted.

I did some more internet research and found I should prepare 'board' by applying at least three (3) coats of Gesso, sanding with fine paper in between each application.  So I did -- both on the sample board and on the board Mali had given me for the final piece.

I still wasn't all that thrilled.  Then it dawned on me: I've always felt more comfortable with watery acrylic on canvas -- or with water colour altogether.  Perhaps I could try water colour on 'board'?  What did I have to lose?  In the immortal words of my first art quilt teacher, Anna Hergert: "It's just a sample."
So...I sampled:

Now, you need to bear in mind that the 'sky/mountains' is only the background.  I also had to fill up the foreground.  And that...that was being done as needle-felting.  The base was a piece of wool felt I bought from a vendor -- Quilter's Quarters of Longridge -- at the Scottish Quilt Competition, on the outskirts of Edinburgh.  I bought 3 pieces all told, for 7.50 GBP (about $12.75 CAD).  I got three shades of earthy greens, which work just right for this work.

And in the end, after auditioning and auditioning and adding wool roving bought at Fibre Week (Olds, June 2017) and fleece self-dyed over the last couple of summer, in jars in the sun...and using my embellisher...

This is what I got:


It will go into the mail in the next few days, once I get a box that can fit it.  I hope it brings in a good price for the ASA fund raiser.

As a sort of  'palate cleanser' after this...I painted a wee canvas (more on that later) and finished another that hadn't had its foreground done.  This time, instead of needle felting, I went with quilting:

I'll have this one put in a 'floater' frame like the others of its kind...and keep going.

Now you're pretty well caught up with the work...so I will leave you linkin up to Nina Marie's Off the Wall Friday...and wish you a wonderful week!

Well done - the use of the wool and felting and painting and who knows what other techniques opens up so many options - I look forward to seeing where this journey takes you.

Wow, Margaret, that is amazing. Would have never thought of combining painting and felting and painting and quilting. Very creative!

Watercolour and felting - a great combination in your hands. Congratulations on a highly successful outcome. I am sure it will do well in the auction.

Hope your trip met your expectations. What a marvelous piece of art you have sampled up!
This is making me have all kinds of ideas! Thanks

Love your Highland Hills board, Margaret. Glad you persisted. Looking forward to hearing more about your Scotland experiences ....