It Happens Every Year

...around this time.  Between the Third and the Fourth Sunday in Advent.  No, I'm not talking about 'Ember Days' (for those of a Christian liturgical persuasion).  I'm talking about the edges of 'Christmassy' feelings -- some nostalgia, some sweetness, some anxiety, some delight.

I start to listen to Christmas-themed music -- everything from "I Can't Give You Anything But Love, Baby" on the vibraphone to "Oh Holy Night" sung by Celine Dion/Johnny Reid/A Major Choir Somewhere -- take your pick.  One of my favourites isn't a standard...it's from a Christmas Special made for television at Christmas 1984.  That's right.  It's so long ago that my now-married son was...well...only a few months expected, and had a good six or seven months to go before arrival (he chose six)...

I watch the dancers in that video and remember the jive steps my Sweetie and I were learning in the mid-nineties before...well...before he had no legs to stand on...

I remember the year I took my son to see the full production of Handel's Messiah with the Calgary Philharmonic Orchestra and Chorus.  He was a newly-minted bass-baritone, learning the "Hallelujah Chorus" to sing at his high school's (ahem) "Holiday Concert"...and he wondered aloud, as we stood for that part of the Oratorio, "D'you think anyone would mind if I sang along?"  Little did we know that within a very few years there'd be a "Sing-along 'Messiah'" that would have fulfilled his wish...and that there'd evolve something called a "Flash Mob" which would have people singing it outside a concert hall setting altogether...


I dig out the creche and put part of it up on my buffet -- just the stable, the shepherd, a lamb and a donkey, for starters.

I get out all my Christmas card paraphernalia -- cards and stickers, return address labels, stamps, my favourite pen, and even -- in Momentous Years, such as 2016 -- compose a Christmas Letter, which I proceed to modify slightly for each household to which I send it.  This year Hanukkah and Christmas fall together, so I decided to add personal Hanukkah letters to my husband's family.  The ones to the U.K. and Spain were sent last week; the ones to the U.S. and Eastern Canada -- for the most part -- went out this afternoon.

I bug my kids about who's spending Christmas where.  As of "press time" this has been resolved!  Christmas Eve in Edmonton!  And Christmas Day!  And maybe a bit of Boxing Day too!

We need all the Light we can get this year, don't you think?  That's why on Christmas Eve at my daughter's home we'll light her Hanukkah menorah and mine, and say the prayers together -- mother, daughter, son, daughter-in-law, so that we might bring as much of the Light of this celebratory Season alive as we possibly can!

I plan (and sometimes execute) Christmas Baking.  This year, it's my Annual 5-Minute Fudge (from my "Fun to Cook Book" produced by Carnation Evaporated Milk (R) and a newbie -- "Cracker Candy".

I'll share some at church at our Annual Anglican Church Women-hosted Parish Christmas Dinner after our Lessons and Carols Service; some with my neighbours; perhaps some at The Shop; and some with my kids, and maybe there'll be some left to share with friends to whose home I've been invited for Christmas Dinner on Christmas Day.

I try to Knit Faster.  And sew faster.  Yes...the Annual Christmas Boxer Shorts are under construction again, along with -- this year, as in every few years -- Christmas Pyjama Pants for both my daughter and my new DIL...

I wrap parcels for mailing, which inevitably means that I have a duel-to-the-death fight with the packing tape.  **!!@@@**!!  Still, I managed to get the last two out-of-town gifts in the mail this morning, including one I can show you -- because the recipient knows it's coming... 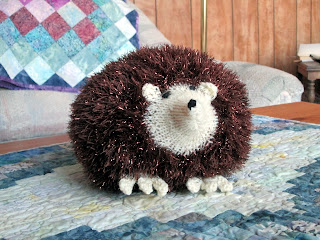 And I figure out how many days I have left to finish all of the aforementioned tasks before Christmas Eve.

In the midst of all the muddle, some evenings I even manage to stop, to light a few candles, to pour a wee dram and sit quietly in the candle-light, pondering what is, for me, the Reason for The Season...

Blessings to you and yours, Gentle Readers -- for whatever your Reason for Celebrating The Season in this dark time of year up here in the Northern Hemisphere, this dark time in world history -- may we each BE the Light we want to see in the world.

I have that same children's cookbook! The brownies are the best.

YES!! What the world needs is more Light!

I think I'll name her Margaret!

Warm wishes to you and your family over these next few weeks. xo