Many of you may not know this about me, but I've long wanted a treadle sewing machine -- ever since I had to leave my grandmother's back in SW Quebec in 2000, because I couldn't afford to ship it west at the time.

I've so named her after the friend who helped me acquire her.  Joan (my friend) bought her at auction decades ago.  About ten years or so ago she gave the machine to her DIL,,,who -- just before Christmas -- decided she no longer wanted it.  So...the machine was taken to the local antiques shop -- Gracie D's here in Mirror (Gracie sells some of my minis).

On Christmas Eve, when I was snowed in, I contacted Joan (my friend) to see if she was okay (she's...ahem...Of A Certain Age), and she told me about the machine.  When she found out I'd have loved it, she nearly cried.

Well -- straight-away I contacted Gracie, only to find out the machine had sold the day before...though it was still in the shop, waiting to be picked up.  I told Gracie that if the purchaser changed her mind, I would be happy to buy it, because I would clean and oil it and learn to use it.

Long story short, "Joan" (the machine) came home with me yesterday afternoon after I got back from my flying visit to Edmonton.

I've done only the barest research but the serial number (I needed a flashlight to see it) has no alpha prefix, and is in the range that's dated 1894 by the ICMS International Singer Sewing Machine Serial Number Data Base.  And that was all I needed to know for certain that "Joan" (the machine) was meant to be mine.

You see, the crazy quilt block I found in a trunk in my aunt's attic in 2000, signed with my grandmother's maiden name initials, is also dated...1894.

Here are some close-ups of this beauty, now ensconced in front of my (north-facing) living room window:

The belt was replaced ten years or so ago when Joan (my friend) gave it to her DIL.  There is at least one bobbin (a 'turbo' shape) and J thinks she has another at home.  There are several feet and other parts -- I'm not really sure they all belong to this machine!  The fact that there are two instruction booklets -- one of which refers to an electric machine -- points to that fact... 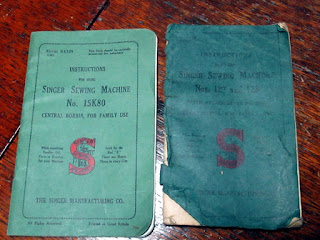 I will take some time to read the booklets, sort the parts and pieces, and clean it according to the instructions provided by Bonnie Hunter's wonderful "Vintage Machines" resources page, and then we'll see if I can learn to treadle!

Just another Christmas blessing, I'm thinking.  It's going to be a creative year ahead indeed!

Awesome, Margaret. Reminds me of the Singer that I learned to sew on. :) I am glad it has found the perfect home.

You might want to join the vintage sewing machines group on FB as well. Most of the posts are "Look what I got!" or "Should I get it?"; but if you ask a question there are real experts in the group who will help you identify parts and will help you fix your machines.

And the best part - even though the group is huhe, there is virtually no drama.

What a beauty! The most satisfying end of your Christmas days I guess. Good luck and happy stitching with it, when you now the swing you have to make, it will be playing!

Fanatstic! I, too, want a treadle. I have an old Westinghouse that is electric, but the motor no longer works and can't be replaced. I'm wondering if I can convert it into a treadle. One of these days, I'll look into that.

Isn't it indeed lovely. I had acquired one but I'm always in too much of a hurry and it didn't make the downsizing. I am looking for a place to set up my mum's old Elna. :)

What a lovely machine! It is in wonderful shape. There is lots of information available, on the web, on how to maintain them.
I have a 1939 electric Singer, which I love. Not sure I am coordinated enough to use a treadle machine.

Congrats on the new addition to your home. She's a beauty.

How wonderful , the machine is sure a beauty , enjoy !

HI Marg - I have my grandmother's treadle singer machine - some years back, I found a gent, here in town who specializes in working with the old machines - I do not happen to have his name but if you do some checking around you may be able to find him. He was able to provide me with some needles, a new belt and possibly a bobbin. I have not worked on it yet but will. When I was at school, I remember that all the girls leaned to sew using the old treadle machines that had been donated to the school - funny, sewing machines have come a long way since then but I don't feel it was really that long ago.. humm enjoy

What a beauty. It definitely had to be yours. I can imagine how happy you are to have this in your home now.

How exciting, Margaret! You're going to end up with those much sought after Victorian seamstress legs "they" all talk about! People say seamstresses who used treadle machines developed lovely legs from all of the treadling action!! All this and the fun and fascination of a lovely old machine! ENJOY!!!