I know that I promised earlier to post about this...so...spurred on by the reminder in this blog post...

I took a class earlier this month at Central Sewing, in the use of InkTense (R) pencils.  Edmonton artist Ginette Guevremont was the instructor.  I promised to post about it...and at last...

There were about a dozen of us in the class -- just the right size for lots of sharing and feedback, and personal as well as group instruction.  :-)  We ranged in skill and experience from artists who draw on fabric to never-tried-this-before.

I had no preconceived ideas about the class; I registered because I wanted some hands-on instruction in the blending of colours with these pencils.  Hitherto, I'd tried them out and failed rather miserably...the photo here looks better than the 'real life' piece... 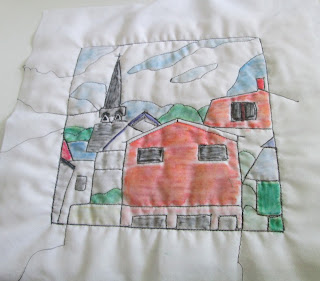 Ginette began by introducing us to her work, largely done with pre-printed fabric which she'd found at IKEA...some of which is no longer available (sigh).  Each of us was invited to take a sample, and I went for the piece with fruit and veggies.

Using these, we practiced colouring in the shapes, then sampling with the 'outliner' pencil, and then with a different -- liquid -- resist, both of which are designed to prevent 'bleeding' when the pencil-coloured areas are gone over with a wet brush:

Then we moved into playing with Crayola and/or Sharpie fabric markers, and learned how to handle 'bleeds' to create shadows to good effect: 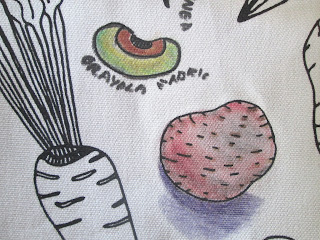 It's worth noting that a "marker" creates a very distinct line/shape and doesn't allow the blending that can be created by these soft-tipped pencils.

A key point: unlike colouring or drawing with pencils on paper, where one might want a sharp tip, InkTense (R) pencils are meant to be used with a softer, more rounded tip for best "colouration" results.

As for colouring in pre-printed shapes...this was all well and good, but I left colouring books behind many years ago.  I wanted to play differently.  And we did!

We moved into "rubbing" on plates (also used with Shiva (R) Paintstiks).  Here, I used a couple of different pencils to rub a design on batik fabric. 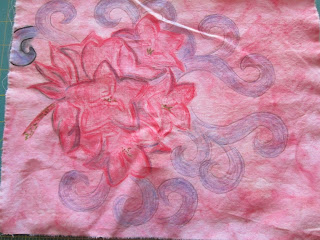 I then surrounded the floral with a stencilled design, which you can see in blue (swirls) above.  I also played with the stencil and a marker...very sharp and clear against that background... 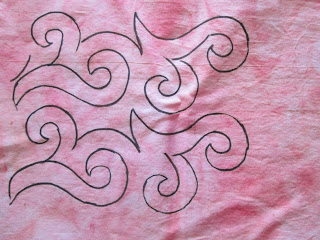 But I valued more this idea of creating a 'controlled wash' -- that is, a 'wash' of colour on a background done in this fashion: 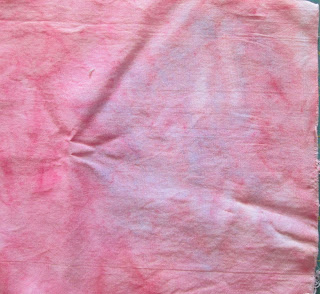 Thanks to Ginette and Central Sewing for providing this class.  It was fun, interesting and  useful.

Great summary, Margaret. I will have to try the wash idea!

Great info! thanks. A soft point and used on rubbings! who knew!!!!

I enjoyed the post. Lots of info and inspiration. Thanks!