Over the Labour Day weekend I met a relatively new quilter.  J accompanied her husband, G, when they dropped in to visit on their way up the highway to Bashaw to stay with friends.  I hadn't seen G in over 46 years...so it was a great time of catching up, but also learning what each of us was up to now...and J was most interested in my quilting.  :-)  She confided that though she'd been quilting for a few years -- yet another one of us 'hooked' by a friend -- she liked using kits because then she didn't have to think about colour choices...and, she confessed, she was rather intimidated by her rotary cutter!

She wouldn't be the first one!

Years ago when I started to quilt, I was intimidated by it too.  So...I took a class.  It was at My Sewing Room in Calgary  (in their original location on Elbow Drive S.W.), and the featured pattern was Magic Tiles, created by Kathleen Bissett.  It's all straight-line cutting and piecing, and once you've spent the day (or weekend) making one of these, I guarantee you'll feel comfortable with your rotary cutter!

As it happened, when J visited, I had one of these on the go for a friend of mine -- a Red Hatter -- who's in a tough time right now.

First, you read through the instructions.  No surprises!

Cut yourself a number of 15" squares in assorted fabrics. I was using a collection of Red Hat-themed fabric I'd gathered over the years.  The pattern calls for 12, but I had only 9 that I thought worked well together, so this is a smaller quilt -- a 'throw' really -- an will finish a little over 50" in each direction.

For this pattern it is essential that you number each 15" square with a wee square of freezer paper, as you have to cut and shift and re-assemble the blocks in a certain numerical order.

In addition to the squares, you need to cut a good number of 1" strips of "grout" (sashing) using a solid or low-value print that will set off the blocks. 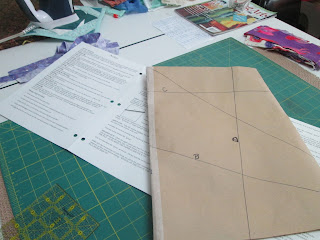 I couldn't find my white freezer paper so used brown for this project and I confess...I like the white better!  It's lighter, and doesn't curl as much when you're trying to work with it.  Of course, I found the box of white after I had all the blocks assembled!

Following the directions, lay your guide on your first square and cut.  You end up with two sections per square: one section with a number, and a smaller section without.  You sew strips of grout to the smaller sections and then re-assemble the sections... having first 'shifted' the fabrics...


You continue to cut the squares using the guide, to shift the sections according to the pattern, and to re-assemble them with strips of 'grout'...until you have a set of fully re-assembled squares!  Note that if you use 12 squares and follow the shifts according to the pattern, you'll end up with one bit of each fabric in each finished block.  However, with 9 fabrics, you'll end up with some duplication instead (I've done this size twice and it's happened both times.  I'd have to do the math to figure it out for 9 blocks and I can't be bothered!)

As the squares develop, it's useful to pin the grout to ensure the sections don't wobble:


Here's a view of the centre of the top hanging on my design wall: 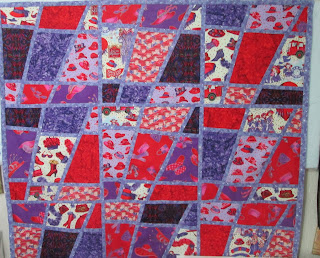 I say "centre" because I am going to surround it with a pieced border...


I've decided to make the top and bottom borders a bit deeper than the side borders, so the quilt will end up as a rectangle.  And...I may add a solid outer border if time and fabric permits...

While I was beavering away at this project, my mind was turning over and over the September Theme for EB's Master Class: "Lost Edges".  In between cutting and piecing I did quite a bit of thinking and researching (lost/found edges are used in paintings and drawings)...and this morning I sent EB my watercolour sketch... 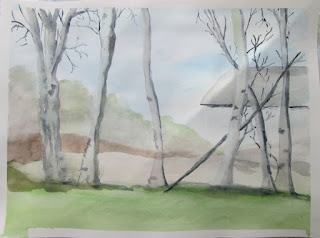 Based on this photo (but without all the details re: the trees...just for now)... 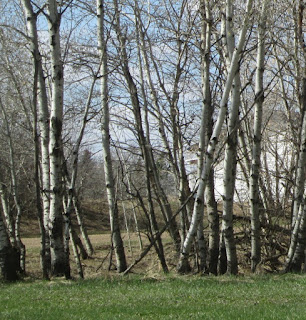 And while I await her feedback, I'm linking to WIP Wednesday on The Needle and Thread Network.

I luv Magic Tiles. Made quite a few. Lovely sketch!!!

It would appear that J was there for a visit at exactly the right time. Your friend will love the quilt. Your watercolour sketch is beautiful.