It's Too Darned Hot

...to write much, so I'm going to post these...evidence of activity despite the heat.

I've been hankering to do this for some time now...taking a page from Lesley Turner, yesterday morning, early, I wrapped four trees: three aspen and one Manitoba maple (I think).  They are on the edges of a vacant lot a few blocks over, owned by Maria and Dave, from whom I procured permission:

I say "I think" because I didn't record which fabric went where.  Will now have to go and do that, of course!  All were tied with plain cotton kitchen-drawer string, and each one is dated: 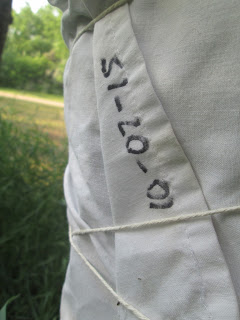 They're not very visible from the roads that intersect nearby (the woods border a corner lot). 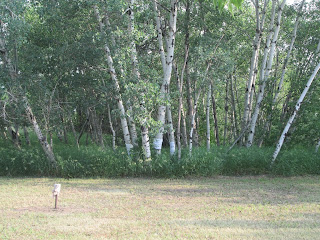 Later in the day I checked on them, and again this morning.  I'll have to let that go now, check less often.  Leave them to the Elements and to Spirit...for however long it takes...

Linking to Nina Marie's Off the Wall Friday...and signing off.  It's Too Darned Hot!

I am intrigued by this.

exactly. sing it Ella! We are considering our options and guess what, it is too darn hot!

It will be interesting to see your results. Don't be too impatient.