To quote a fellow-student in this year's EBMC, "This piece very nearly landed in the bin."

I spent most of yesterday with the re-vamp of my May piece for the "Landscape" theme, and the quilting was a struggle.  It was my own fault, really;  I decided to try a slightly different tension for my walking foot (recommended by the instruction book that came with my sewing machine) and it looked great on top -- but underneath, a mess of small loops where the top thread was pulled down off the surface.  Sigh.

Reverse sewing was the only way out.  Rough-edged fused strips became really rough-edged and bits of frayed thread were all over the surface.

(cut here to weeping, wailing and gnashing of teeth....)

Cursing gave way to a frustrated yell to the Heavens...recognizing I should have gone with tried-and-true...

Eventually, the thing was quilted:


Here's the faced piece on my design wall (facing still has to be stitched down but at this point, I consider it ready for submission to EB): 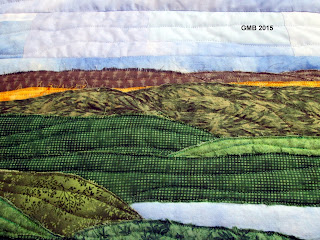 I think this came out very well...especially the detail!!   The little hint of gold does just make it!  A LOT better than that darned shed!!  That's because its shape is in keeping with the other shapes so it is unified, but the color is bold and that gives one the contrast.

With hindsight the full version would be a lot better if the sky wasn't so obviously stripped...if instead you had pieced the sky in a similar fashion to the land...the vertical joins stand out very boldly and really for no good reason.

I do like the canola!!!  Yes when I say rape[seed] down here people look at me very funny...interesting though both here - in Georgia - and in the UK, it's a bold chartreuse, never gold - I've got it in a least one quilt and several paintings!!

The slough looks okay...but would have been better had it come further across...or come and gone (as it were) like the canola.  Remember you don't have  to make it exactly as it really is!!!

But you have caught the sense of the rolling plains and the wide wide sky which is very nice indeed.

All in all, I'm satisfied.  I take her point about the pieced sky, which I created because I wanted to generate movement in the sky and because, darn it, I wanted a variety of blues and didn't have enough long yardage, so I used shorter bits!  (grin)

Linking up to Nina Marie's Off the Wall Friday, and taking a break with some knitting.  I have a sock to finish -- and the Socks-from-Stash challenge deadline is tomorrow night!

It is good but I did notice the sky and thought diagonal sewn strips would have been subtler. The suggestion to imitate the the ground piecing makes sense. :O Despite the ripping and the "I should have known..." it is well done and what a great class you are in!

I actually enjoy the sky-I think it's interesting and just a little bit of the unexpected. The gold-oh my that is lovely and makes the piece. I would not have thought of that.

Well done I like the contrast between the direction of the sky and ground. Cheers

I love everything about it! Good job!

I like the effect of the sky... feels expansive. Yes, that gold/orange does add so much to the piece. Wonderful landscape, Margaret!

I like it. I think the sky works but it would be interesting to see how using curves would work. Sue Bleiweiss fuses a false back to her quilts to cover untidy stitching, might save you lots of reverse sewing.

I like the detail very much and I had to think for a while why that was so. I like the way the slough extends visually off the bottom corner and ends off center. Ditto with those lovely gold bands--they keep going. Have you ever thought about taking that detail and creating a piece with the composition that is there? There's a reason you selected that portion of the piece (which I like as well) as the detail. ;-)