A Box of Dreams 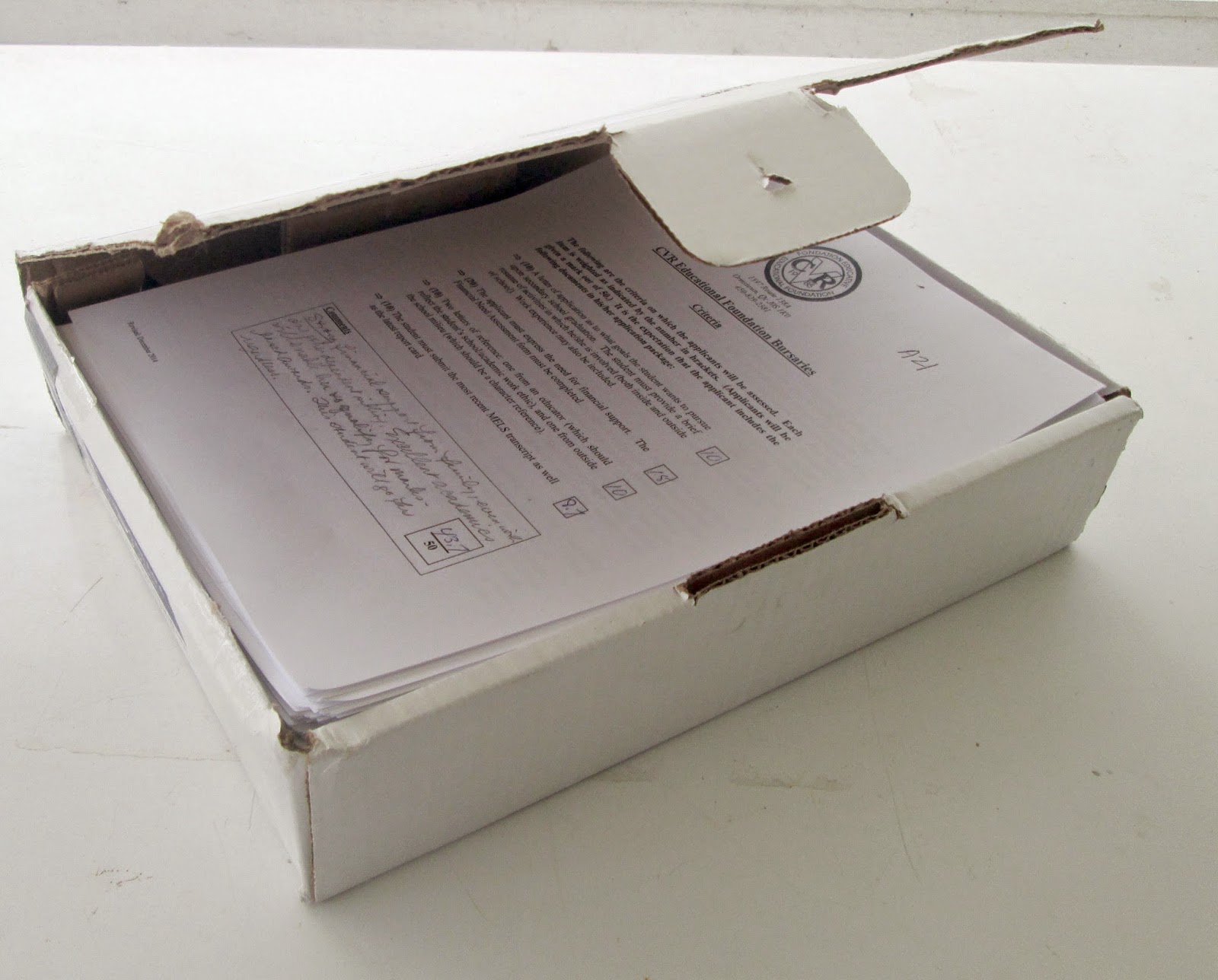 In 2003, my family endowed a bursary to the Educational Foundation of my former high school.  The bursary honours my father and his sister, who were both teachers.

There are two equal awards given each year -- one to a boy and one to a girl -- students in the graduating class of the given year who document why they want the award and the extent of their need for financial assistance.  In addition, each applicant must provide two letters of reference (one from someone in education/the school and one from the community), and records of his/her marks.

The students are marked out of 10 points each for their letter, their references and their marks -- and 20 points for financial need.  I am but one person on a committee struck by the Foundation to assess the applications, prepared anonymously.

The box of applications for 2015 arrived earlier this week: 37 from the girls, and 11 from the boys. (Getting high school boys to see the value of applying for scholarships and bursaries is like pulling teeth.  None of us adults -- parents, teachers, Foundation members -- have ever figured out why, and the boys aren't telling.)

In the 12 years I've been reviewing these applications, I don't think I've had as much fun as this year.  This may be due in large part to the students' opening gambits, the first thing I read.  For example:


Ever since I can remember, it was always hard for me to make decisions...With all of the options that are open to me, I can't seem to choose a path because I don't want to miss out on anything.

Or how about these...striving for humility...?


As arrogant as this may seem, I would like to tell you why I would be an excellent candidate for an Education Foundation bursary.

As blatantly self-serving as this makes me seem (not a pleasant feeling, I can tell you), please allow me to present myself as a candidate for an Educational Foundation bursary.


Running around is what I do best.  What's the point of anything if you are not willing to improve or try something new?

As I child, I was very clumsy.  I spent countless hours in the emergency room with broken bones and other injuries.   Yes, she aspires to enter medicine. :-)

I'm not going to lie; [college] is a big scary change.


Honestly, as nerdy as it may sound, math has always been my favourite subject....It is so rare to come across somebody like me...

Since I was little I always dreamed about being more than just somebody in the crowd.  I have pushed my limits to the maximum so that I wouldn't be ordinary.  I want to be the person who makes a difference in our world, I want to be extraordinary.

Those opening lines were written by some of the female applicants.  The males?


Ever since I was diagnosed with leukemia when I was six, doctors have been like parents to me; I would see them every day and often more than I saw other people.  (Another future doctor.)

...I have been passionate about joining the Canadian Armed Forces my whole life.  There is a long line of military history in my family.  It all starts with my grandfather protecting the coasts of Canada from the threat of Nazi invasion during World War II,,,

For years I have been dreaming big and have strived [sic] for success...


Quite simply, the reason I am writing is because I want to go to school...I am a decent student and every once in a while I was able to be on the honour roll...

This one brought tears to my eyes...and then a chuckle...:


...All my live I've faced people whom [sic] always miss judged [sic] me and thought I was never going to amount to anything.  This is something that has never changed and till this day I am still proving people wrong even though all the odds are against me.  It is because of my great charisma and sense of leadership I've been able to make it this far in life...

Then there's the boy who's boarding with a Canadian family at 17 in order to finish his education in Canada.  He's from China...left his family there and is all alone, learning not only English but French...adjusting to a very different culture...

In addition to the students, in the midst of the usual patter from references, one author -- a teacher -- stood out.  It got so I recognized her 'voice' in her letters.  She's a real cheerleader for "her" kids:

I am writing to support _____________'s application for a bursary.  I taught __________ last year...but his parents are colleagues and friends and I have known [him] since birth...I feel I can comment on his personal attributes with a small bias, but on his academic attributes objectively....I know this is a tough balance to strike...

She is a supportive realist when required:


___________ is in my Grade 11 class this year, though I have known him socially around the school for a few years, and am well aware of the impact that his concussions have had on his learning.  ___________ is a star athlete, the fastest runner in the school, and has unfortunately suffered a few concussions in football season which have slowed him down academically quite a bit.

I have taught _________ now for two years....[His] father passed away the summer of 2013 I believe, and he returned to school in September right away, and was in my Grade 10...Having lost my own father (albeit at 40 years old, not 15) I know how hard it was...I was amazed that such a young person was able to handle himself while grieving with such fortitude, grace and integrity...

And really got 'into' the personalities of each of her students:


_________was a student in my Grade 10...class last year, and this year she is one of the few students whom I miss...Sounds funny; of course there are others who are wonderful to teach, but [she] has an alchemy as a person and as a student that changes the chemical balance of a room...

Even the ones whose performance was less than stellar:


I am writing to support ____________'s application for a bursary...I know it seems strange to be writing to support someone who has not submitted most of my assignments (over two years even).  But there is just something about [her] that is too lovable; you just have to stay in her corner and keep rooting.

And then there's the reference -- from this same teacher -- that made me laugh out loud:

With a teacher like that on one's side, a student can't help but feel valued, encouraged, supported...and on his/her way!

The Box of Dreams goes back to the school tomorrow.  I try to attend the graduation ceremonies every five years to give out "my" bursary...next scheduled for 2018.  I shall miss meeting this exceptional group of applicants, but maybe...just maybe...their teacher still will be there...

I leave you with a tune that's been a favourite recessional in recent years, for classes graduating from my former HS...


Another turning point, a fork stuck in the road...

Time grabs you by the wrist, directs you where to go

So make the best of this test, and don't ask why

It's not a question, but a lesson learned in timeIt's something unpredictable, but in the end is right,

So take the photographs, and still frames in your mind

Hang it on a shelf in good health and good time

Tattoos and memories and dead skin on trial

For what it's worth it was worth all the whileIt's something unpredictable, but in the end is right,

I hope you had the time of your life.It's something unpredictable, but in the end is right,

It's something unpredictable, but in the end is right,

I hope you had the time of your life.*

Totally enjoyed reading the excerpts - must have been difficult to make choices!

Thanks for sharing these. I don't envy anyone having to choose the recipients.