This time of year there's never a dull moment around my sewdio.  As Joni would sing, "It's coming on Christmas; they're cutting down trees.  They're putting up reindeer and singing songs of joy and peace..."

And me?  Not cutting any trees here, but fabric, yes.  As I mentioned in my last post, I've caught both the piecing and the clear-up-scraps "bug" and have been doing some of both lately -- sometimes even simultaneously!

The pieced greens I showed you have now been cut up and a portion inserted into my latest 15 x 15 piece for the theme "Roads", which will be revealed at month-end on the our 15 x 15 blog.  Stay tuned! 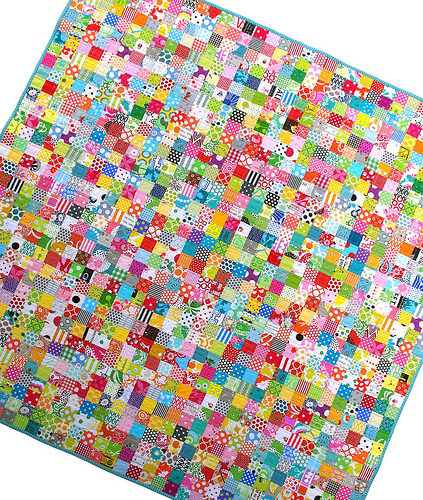 Having emptied one bag of crumbs into a basket and assembled a few into 3" squares, I tackled a large hanging container that's mostly strips, sorting them into two projects.  Wider, longer strips will be cut into 2" x 7" pieces for a postage stamp quilt based on this pattern and tutorial I found on "Red Pepper Quilts".  Call me crazy, but I've wanted to make one of these for a long time.  It also might take me a long time -- but so be it!  ;-)

Narrower strips in random lengths will join assorted scrap rectangles and squares and be pieced on 8" paper foundations -- a la Bonnie Hunter -- for the "Easy as 1,2,3" quilt I found in the Victoriana Quilt Designs free patterns section.

I'd cut a stack of 8" paper squares (from advertising/junk mail flyers), and they were just waiting for fabric, so I put one together.


Turns out the middle section -- a row of flip-and-stitch squares that starts in the centre of the paper foundation and works its way outward -- is a bit of a pain to do.  Unless I'm missing something, it doesn't lead itself to chain piecing like the attachment of the longer strips -- edge to edge.  Thus I'm only going to create other blocks like this if I already have a piece that consists of sewn squares -- and I've found a few of them from earlier projects. I'll treat it as a "pieced string" and go from there.  Might even make more from my crumb collection.

The above projects are ongoing types that will be finished over time -- they've been keeping me out of trouble till BKH announces Clue #1 in the Grand Illusion Mystery.  ;-)  Neither are they meant for Christmas gifts.  On that front, I've been knitting madly, to wit:

Gina's infinity scarf is now about 74" long.  Only ten more inches to go.  I'm doing two 10-row pattern repeats almost every day so I'm looking at another week or so and it will be finished, ready to sew the ends together.  Pattern: Martyn from Berroco booklet #334. Yarn: Berroco Ultra Alpaca Tonal (now discontinued) in browns.  This is no surprise to my daughter; she's given it her stamp of approval -- so I can show the photo here.  :-) 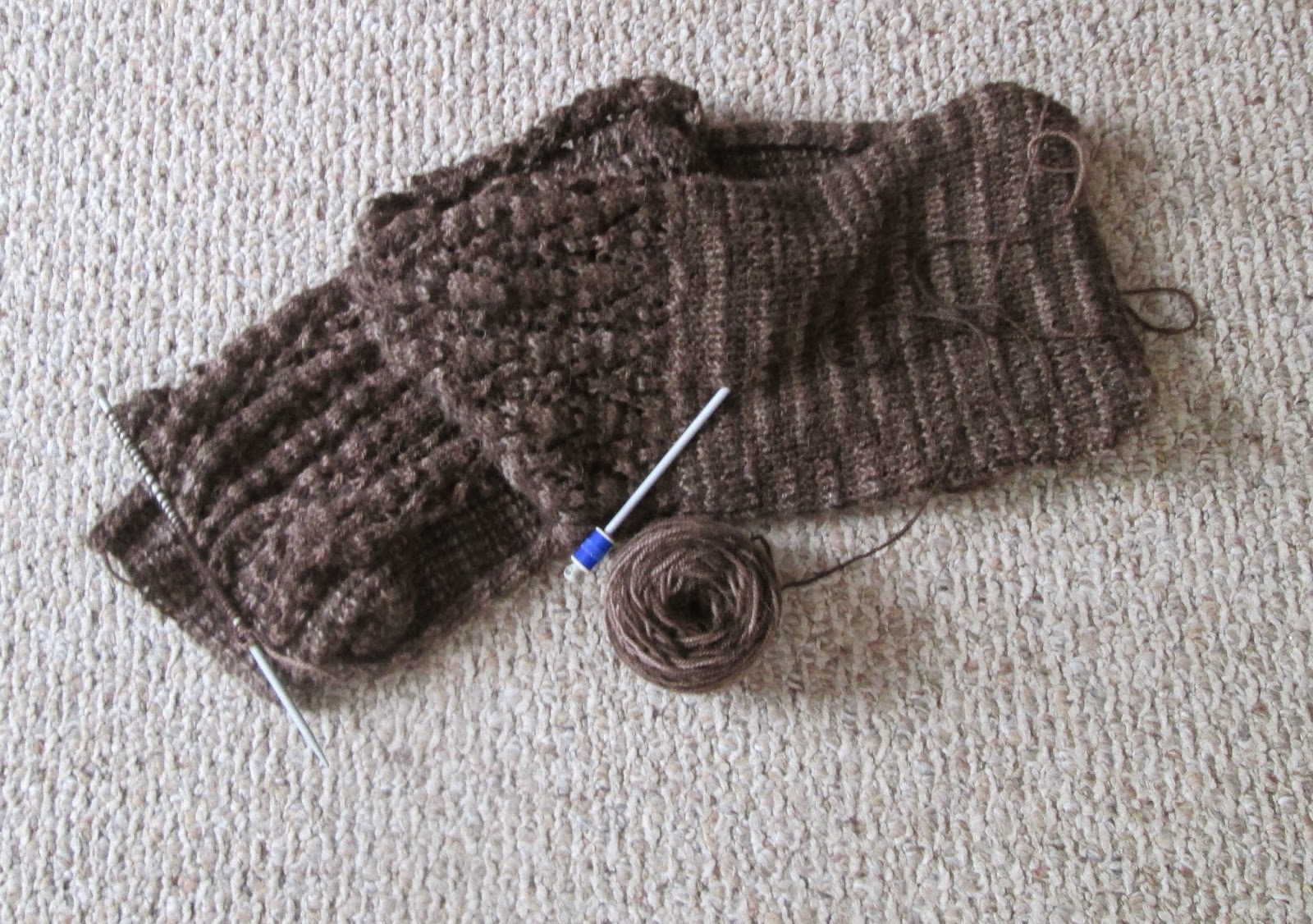 Then there are gifts for Relatives Who Can't Be Named in order to keep the surprise:

I've started the second Wild Sock and am approaching the heel.  The cowl needs to have its ends sewn in and then to be washed and blocked.  Another cowl is on the needles and another pair of socks is waiting in the wings...and a throw quilt is sandwiched and ready for quilting as a gift to my next-door neighbours who take such good care of me all year.

Thank goodness for "palate cleansers" like these projects, which rest and refresh my brain.  I'm gearing up for a new year of study and travel, including some pretty intense original work/sampling, so I'm more than delighted to spend December "playing" with Other People's Instructions.

And that's all the WIPs I have for this Wednesday.  I'm linking this up to WIP Wednesday on The Needle and Thread Network -- and going out for a jog before the snow starts and the temps drop.

Happy Thanksgiving for tomorrow to my American readers...may you have a blessed time with family and friends.  I'm thankful you read my ramblings, and encourage me with your comments!

You're busy and will be busier after that first clue in the Grand Illusion Mystery is revealed! These are lovely projects! You can't be bored!

Well just hunker down and create!

You're very productive. It all looks good. Enjoy it.