It's Trickier Than It Looks

Using an embellisher (needle-felting machine), that is.  I played around with it on Friday afternoon, with B&L's "Embellish and Enrich" at my elbow.  Jan and Jean (if I may be so bold to call them by their given names, when we haven't even met!) fill their booklets with ideas and inspiration, rather than strict instruction, so trying to follow through and create some of their examples is a bit of a challenge all on its own.  Add in a roaring machine equipped with 12 barbed needles and...well...!

First I played with acrylic felt and made a couple of samples that mirrored the book's:


Then I moved on to playing with sheers.  This sample is of a sheer felted to a synthetic, somewhat "shiny" white fabric.  Both are scraps given me years ago by a client who is a draper and upholsterer.  The sheers taught me about the power of my machine's 12 needles -- for I broke not one, but two!  It seemed I'd been going too fast and perhaps pulling the fabric against the needle tips, for it was only the tips that broke.

Following my instruction booklet, I got the needle cover off, and loosened the screw that holds the container for the needles.  You have to take it out of the machine in order to remove and replace needles.  The instructions were unclear on exactly how to remove it so I called my trusty dealer, and Judy walked me through the process.  We talked about the power of the machine and how 12 needles really distress and distort the fabric quickly.  She suggested I not use all 12.  Who'dda thunk it?  So I took out the 2 broken ones and one other, so that I was down to 9 -- or 75% capacity.  Much better drive the next time out!

And I really like how the sheer fabric puckers and folds -- and how the felted folds look.  There's potential here: 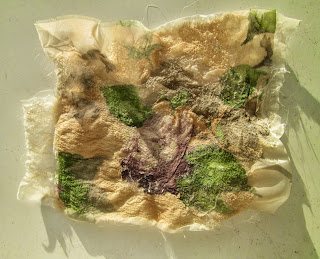 I played a bit more yesterday afternoon with sheers on sheers, and a single layer of sheers, but have taken no photos of those samples because there wasn't a great deal going on.

My brain became a bit overloaded with the results to date, so I took a break Saturday and part of yesterday afternoon to work on the piece I'm calling The Door Quilt -- for want of a better title at the moment.  It's for an old, drafty door in our parish church, and consists of pieced panels in the colours of the liturgical calendar.


The green panels will be quilted separately and then attached, side by side.  This pair will then be attached across the top by the quilted blue/purple and red panels.

Overlaid on this quilted background will be a large motif...The finished size of the piece is expected to be 38" W x 72" long -- you can see I've built in extra width, which will be trimmed away as the piece takes shape.

Having just washed the backing fabric for all three sections, this afternoon's work consists of sandwiching the top section and perhaps beginning to quilt.

But for now?  A good long jog in the mid-day autumn sunshine.

Happy Thanksgiving!
Posted by Margaret at 10:49 am

Happy Thanksgiving, Margaret. I'm very curious to see more of both of your projects.

Hi Margaret
I just caught up on a week plus of entries on your blog. You have been busy! I love the flowers you are working on. I am totally envious......I have been away from my machine ....did knit a hat and fuse 8 blocks for an Elmo quilt for you know who, and finish a second sock monkey.

Seems preparing for the holidays is taking precedent over art at the moment. Just the flow of life.