I've had to put "Waiting for the Train" away for a bit; I ran out of ribbon!  An order has been placed for two 50-metre spools, which won't arrive for at least a week and by then I'll be finishing up the Show and packing  in earnest for Santa Fe.  Ah, well.  A project for May.  :-)

When I left off last evening, "Waiting" looked like this: 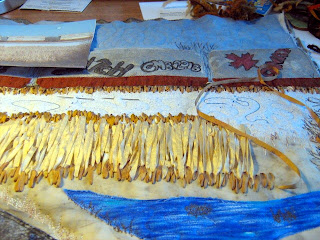 I admit I'm not entirely happy with it.  The light tan 'rushes' are too heavy; there's not enough variety of weight and texture.  I'm considering taking some of this out and interspersing it with crewel wool from my stash.  And more grass has to be put near the water's edge -- and not by thread-painting, which is too fine.  So.  Just as well I can leave it; I have plenty to go in the show.

Instead I've spent this April Snow Day embroidering evergreens on the Atlantic Seaboard Sampler, and assembling another batch of 6.5" blocks for P's "Hunter's Star".  I now takes up my entire design wall -- and there's quite a number of blocks to make yet: 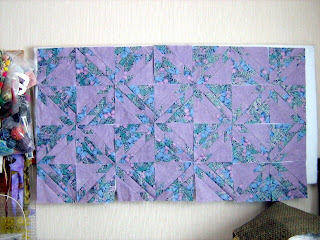 While sewing I was entertained by these unfamiliar black-and-white birds at the feeder in the tree right outside my sewing room window: 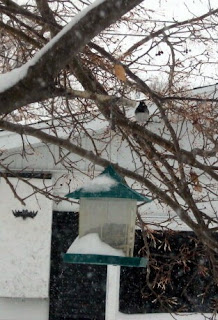 Though it may look like the sun is shining in that photo, it isn't!  It was (and is) still snowing, and the sky is white, meaning bright white "snow blind" conditions.  The feeder kept swaying in the wind, but the wee birdie (and two or three of his friends) were persistent and I do believe managed to dig through the snow to get some of the food!  Alas the poor robins are totally confused as they don't eat seed.  They've been making do with berries and sitting forlornly on tree branches wondering where the bugs are...

I tried to get more shots of them but they were moving too fast.  Here's the only other one that turned out: 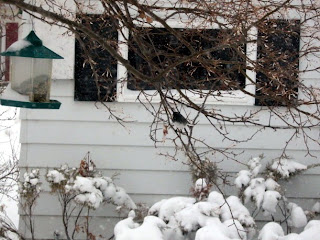 See him in the centre there?  The building in the background is my garage...fronted by heavily-laden junipers.  My neighbour has been shovelling despite the fact it's still coming down steadily, simply because this stuff is pretty heavy and wet.  He has a flat roof (mine is peaked) so he's been up there shovelling it off.