No, I'm not referring to the subject matter of this morning's post!  (Grin.)

A friend of mine has a birthday next week.  We're relatively new buddies (about a year now), and I know she loves to stitch -- particularly embroidery, or combinations of quilting and embroidery.  I've done up a piece that I want to finish before I tootle off to Edmonton on Saturday -- and I decided I wanted to try my hand at the hem-stitched cut-work edging.  Oy vey!

Thank the good Lord for the internet; I found a tutorial that took the mystery out of the instructions that come with the pattern.  Those instructions assume one knows what one's doing in that department.  I've embroidered for years and dabbled a teeny-weeny bit in hardanger, but cut-work is an entirely different matter.  I feel the same way about it as I do about steeking a sweater; I break out in a cold sweat!

First, I practiced on a tiny corner of the linen that wasn't going to be used.  Then, following the tutorial carefully, I put in two lines of basting, using the dimensions called for in the pattern.  This is 28-count linen we're dealing with here; I needed to leave 8 threads from the edge of the embroidery to the start of the cut-work and to allow 4 threads for...ahem...cutting. 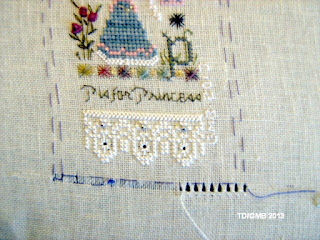 As of this typing, I've finished the entire bottom row...and will do the same to the top.  I've decided, however, that I'm not ready to tackle corners!

Once top and bottom are thus embellished, I will trim the piece and fold over the edges as for a 'regular' hem -- except for the casing for the bell-pull hardware.

Enough stress for one day!  Tomorrow I'm back to miniatures!

P.S. The pattern is from the Alphabet Sampler Series by Thea Dueck at The Victoria Sampler.  As a friend of my friend sometimes reads this blog, that's all I'm sayin'!
Posted by Margaret at 4:37 pm

Oy vey! is right! I won't even ask what steeking is! lol