I love pod-casts; I listen to them on my computer while stitching, and on my wee iPod "Shuffle" while gardening or jogging or in my sewing studio while working at my machine. One of my favourite programs is PRI's "To the Best of Our Knowledge" (their pod-cast on Gordon Hempton and inspired my 12" square quilt, "One Square Inch" in 2010).

Today on my jog, I listened to a program on the topic of handwriting -- and how it's becoming a lost art because it's no longer being taught in schools (presumably in the US, as I've not heard of this happening in Canada -- yet).  Apparently this means not only cursive writing, but also printing.  Sigh.

The same women who fostered knitting, embroidery and quilting in my family were also writers of letters and journals. 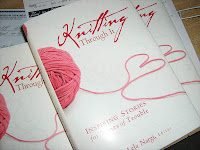 I too love to write.  I've had a poem or two published in a Calgary writers' organization publication; I've even had an essay published in a compilation edited by the wonderful Lela Nargi.

I write every day, some -- and not always at the keyboard, or on the blog.  In January 1992 -- the year in which I'd later turn forty -- I resumed my practice of keeping a journal and, in the style of Julia Cameron, I generally write two to three pages per day by hand, every day, first thing in the morning, in bed, often with a cat on my lap and always with a cup of coffee at my right elbow!

I acquired my first pen-pal at age 10 -- J from the UK -- and we met twice: once when we were 21 and I travelled to England, and later at 40 or almost, when in August of 1992, DH and I took the kids over to England and Spain on holiday.  We continue to correspond -- now by e-mail, and much more sporadically -- but have sustained an on-and-off relationship for fifty years.

My husband and I met over letter-writing.  In 1967, my English teacher in Quebec and his in Vancouver, B.C., being friends, decided that a great project for Canada's Centennial Year would be for their respective Grade Nine classes to write each other.  H picked me off a list; we wrote for two years and then dropped it.  However, in the fall of 1974, looking for work in broadcasting (he was an 'operator' behind the scenes) H decided to go East to Montreal.  He wrote me; the letter reached my parents, and I totally surprised him by writing back.  When he got to the city he looked me up and...yes...more history: a 31-year marriage and two great kids.

Kids who...don't really write -- by hand, that is.  Well, they have developed distinctive signatures for signing cheques and documents.  When they need to write by hand they generally choose to print.

But here's the interesting thing: their cursive writing (my son, with his left hand; my daughter, with her right) is almost identical to their father's.

This is what fascinates me, too -- finding traces of one's ancestor's handwriting in one's own.  Check this out:


Now, I take after my father's family in build (short and square), facial expression (except my smile, which is my mother's!), temperament and colouring.  Looking at the handwriting, it's very close to my father's and his mother's and yet...

Take a look at your writing.  Compare it to those in your lineage...if you are able.  What do you see?

What may be worse is that they will lose an appreciation of the art and romance of the hand-written word; they will lose yet another wee piece of their souls.

All is not lost, however.  Hand-writing -- via calligraphy -- is making in-roads as an art form.  Last spring at the Lacombe Art Show and Sale, my daughter and I visited an exhibit by the Red Deer Lettering Arts Guild. Although their 'take-away' project was the trendy doodling exploited by a variety of scribblers and turned into 'Zen Tangling', what attracted me were the books, the journals, the beautiful scripts...

And then in the blogs I follow, today this post by Deb, who's just participated in a calligraphy workshop and is fired up to create more wonderful hand-written words.

Maybe we could persuade Blogger and WordPress to offer scripts as fonts for our blogs?  I would love to be able to "write" to you in Lucida Handwriting or Lucida Calligraphy, for example...what do you think?

Email ThisBlogThis!Share to TwitterShare to FacebookShare to Pinterest
Labels: calligraphy, handwriting, Kitty Burns Florey, PRI, To the Best of Our Knowledge

Wonderful to think about handwriting genealogy...thanks for sharing. I think it a loss that cursive will no longer be taught. There is something about the hand eye connection....

I am shocked to learn that handwriting may not be thought everywhere anymore. How sad. When I was a young girl (and still today), my favorite stores were "papetries" - I am not sure of the word in English - where you can buy all sorts of pen, pencils, booklets and paper.
Maybe we could stop typing our blogs and rather write, the traditional way (!), scan and post our thoughts?

My oldest son learned cursive in 3d grade and just one year later it was taken out of the curriculum. So, my youngest does not write cursive and has some difficulty reading it. Go figure.

BTW I did the 3 pages of journal/day for a few years and recently dropped it. It is definitely a useful exercise-I must start again!

How wonderful to have these examples of your ancestors handwriting!

How timely. I wrote (printed) two postcards this Hawaiian vacation. Something I haven't done in years. And I was thinking about how postcards are kind of like status updates of the pre-cyber-era. And despite increased e-mail and decreased personal post-mail for most people, there is still something exciting about a letter or a postcard in the mail box every now and then.

Thank you for this post... as I hadn't considered hand-writing and genealogy before. I will definitely make sure I add the bits of notes I have to the pages I am writing of my family !
So glad I was blog-surfing this morning.
If you start a petition for a hand-writing script ... sign me up !