Last But Not Least

Week Three of my 10th "Blog-aversary" celebrations begins now -- and it's all about fabric -- or at least, quilting with it.

In the scheme of things, I haven't been quilting that long.  I learned to knit from my mother -- as I mentioned last week -- around age 8.  Mom knit till she couldn't see to do so (about age 85).  Her mother knit (Grandma D died in her seventies, when I was a toddler); my father's mother knit, my father's sister -- my dear Aunt A -- knit into her early nineties (she died at 94 in 2002).

But my Grandma R -- my father's mother -- was also a superb seamstress who created patterns out of newspaper and made her farm family's clothes, all on a treadle machine, and who quilted.  I still have a pink and white single Irish chain that she made me, which I used on my bed in my first apartment, but which was torn one summer when I was away and someone else was 'apartment-sitting' for me.  It now hangs on a quilt rack in my guest room, along with several of the quilts her daughter -- Aunt A -- made for me, and the Golden Wedding Ring given my parents (I commissioned it) on the occasion of their 25th wedding anniversary.  These quilts are pieced by machine, but all hand quilted by a group of women in my home town who met regularly around a frame.  I'm not sure if my Aunt A was one of them or not.  And most of them were constructed of fabric scraps -- many sent to her by me -- from garment sewing.  The only 'new' fabric bought for them, latterly, was for backing and maybe backgrounds or binding.

I still use several of these quilts on the two beds in my home, but they are wearing, and so I joined Bonnie Hunter's Mystery Quilt-along for the past two years so that now I have tops to replace them.  I enjoy the quilt-alongs so much, and have enough stash so that I can see myself doing this for a few more years at least!

I've sewn since about age 11, when I took my first Home Economics classes in Grade 6.  Half the year was spent cooking and half, sewing.  I'd just started to embroider at that stage, and still have the little felt needle-book we each had to make as the first project in our sewing class.  I think in Grade 7 we made an apron -- mine was turquoise and white gingham, and I think I still have it somewhere (it still fits!).  In Grade 8 we learned gathers and casings with a peasant blouse and gathered skirt.  By Grade 9 things were more complex, and I think that's the year I made a wool suit -- straight skirt with waistband and back zipper, and a jacket with a notched collar and bound button holes.  I wore that thing for years whenever I had to look particularly spiffy for lunch or a meeting or function.  My last year of Home Economics was, as I recall, Grade 10 -- I took 10 and 11 together and wrote my final exam at the end of that year.  The project was home decor-related and my first experience with a teacher (not the one who'd taught me to that point) who had no imagination.  But that's another story!

When I got my own apartment in university, my parents bought me a second-hand portable sewing machine that weighed a TON and had all kinds of fancy 'bobbins' for decorative stitches, which I rarely used.  I used that machine till one day, in my married-with-kids life, I dropped it, and it died.  I'd been making clothes for myself and the kids, but by this time my daughter was taking sewing lessons and making her own.  Her teacher was a neighbour who had a "Kids Can Sew" program through Husqvarna, and when after the first three years she had to turn over her sewing machines, she offered me one at her original cost -- and carried the warranty on it for a year.  I was thrilled!  It had a free-arm!  Now I could do set-in sleeves without sweating!

Of course, by then I was making fewer garments altogether, let alone setting in sleeves!  And my DH's Type 1 Diabetes was really starting to rear its ugly head, meaning that my stress level was going 'way up.

Enter two dear friends who are quilters.  They opined that cutting and sewing strips of fabric would soothe me, and give me an outlet besides knitting and cross-stitch (the type of embroidery I favoured at the time).  I fell for it, went to a couple of demo-type classes...and then found My Sewing Room (smaller then than it is now) and the Magic Tiles quilt pattern by Kathleen Bissett...and fell all the way down that rabbit hole.

I took a few classes in silk ribbon work and crazy quilting, having found the CQ block done by my grandmother -- Maria Flood McIntosh -- with her maiden initials and the date embroidered on it (1894).

Then I saw an exhibit of patchwork and contemporary embroidery by the City and Guilds students of Gail Harker (there was a class of 8 in Calgary, which she taught as a single group, even coming up from Oak Harbor, WA to do so)...and I said to one of those dear quilting friends, "I have to do this".  I met Anna Hergert there...took a class from her, and another and another...and..."The rest", as They say, "is history".

Here's the last of the three Goodie Packs I prepared as gifts for the Gentle Readers who, by virtue of commenting on blog posts through the past couple of weeks, rendered themselves eligible.  All comments from Weeks One and Two have been dispensed with, for a fresh start.  Again this week, the winner of the package shown below will be drawn from all the readers who leave comments between when this post goes 'live' into cyber-space, and about 8 a.m. Mountain Standard Time on March 1, when I make the final draw and the party ends...

Remember: your name is entered each time you comment, whether on this particular post or on subsequent posts through the week, even if you comment every day.  :-) 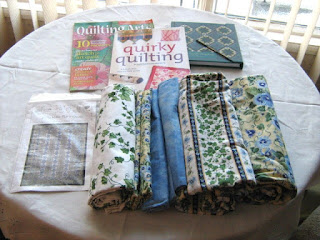 
And just as in previous weeks, there'll likely be a surprise gift or two given away between now and next Friday...Y'all come back soon, y'hear?  :-)

Margaret,
How wonderful to hear your story about how you started sewing. I love that. Many of us started very young, and have grown so much with it.

I've been sewing since I was around 8 but only quilting for about 12 years! no one in my family sews although my sisters knit (I don't)
Happy Anniversary!