After several Serious Posts, it's definitely time to lighten up a bit -- and having read arlee's post this morning (she wrote it late last night), I simply had to check it out and tag along.  "It" is the TUSAL  (Totally Useless Stitch ALong) going on over on Mary Ann's blog.

The TUSAL consists of collecting one's ORTs (Old Ratty Threads) in some sort of container and then sharing one's collected amount every New Moon (the next of which. apparently, is January 11, 2013).  It's a bit of a giggle, considering I used ORTs to create the very first piece I ever had juried into an exhibit.


This is the current state of my ORT jar -- in reality a huge goblet I was given at a Credit Women's conference in another lifetime: 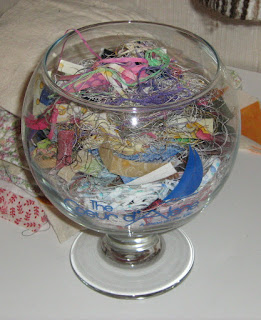 I used to use a recycled paper bag for my ORTs, but was inspired to use the jar by a fellow-quilter (I want to say Monika K-W, but I'm not entirely certain of that) to recycle something more attractive.  :-)  Post-"Snippets", I've generally thrown out my ORTs when the jar gets full, but perhaps in light of the TUSAL I'll save them through 2013 and see what I can make of them next year around this time.  I've promised to start fresh for the TUSAL by tossing the last of my 2012 ORTs and beginning the new year with an empty jar!

So...a bit o' tongue-in-cheek humour, a new community to explore, some astrophysical education, some recycling and the promise of a potential project at the end -- what's not to like?
Posted by Margaret at 7:08 am