It Begins With Research

Indeed, there are many applique traditions out there, the earliest of which includes a canopy dating from 980 BC, which was part of the funeral tent of Queen Esi-mem-kev and is housed at the Boulak Museum in Cairo.

Some traditions are relatively new to me: that of the Kuna Indians of the San Blas Islands off the coast of Panama, which uses reverse applique to create molas which are used in pairs for the front and back of blouses; and Pa Ndau, or flower cloth applique made by the Hmong tribal people of the mountainous regions of Viet Nam, Laos and Thailand, used for both bed covers and various articles of clothing, including belts and hats!  Pa Ndau is also a form of reverse applique.  Then there is Ralli (or Rilli) from parts of India and Pakistan, created in designs individualized to the region of the maker.  These may use patchwork (piecing), applique and/or embroidery, and are specifically used as single bed covers.

Being of Scots/English descent, born and raised in Canada, it is the Western traditions with which I'm far more familiar.  I've learned that broderie perse (literally, 'embroidery of Persia) was the earliest form of applique to migrate across the Atlantic.  Shapes were cut from expensive hand-coloured chintz made in India and imported to Britain -- and then exported to America with significant import duties attached.  The shapes were appliqued onto a white or unbleached muslin background, often with decorative stitches drawn from embroidery -- blanket or button-hole stitch, for example.  Barbara Brackman has an informative article about this style, including what makers are doing nowadays to reproduce traditional broderie perse creations.  Another resource for the history of this type of applique in the US is womenfolk.com, ably assisted by The Quilt Complex.

Album quilts -- specifically, those created in Baltimore in the 1840s -- were originally made to commemorate a festive event such as a wedding, or as memory quilts, given to family or friends who might be moving far away (such as out West).  In recent years, Ellie Sienkiewicz has revived the Baltimore album style of applique, publishing her twentieth book on the subject in 2010 (that's what I call 'working in series'!); another well-known practitioner of this art is Marylou McDonald, who has been creating BAQ-style quilts since 1991. 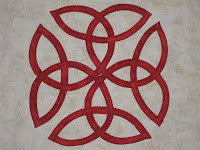 Then there is the Celtic applique style, largely using bias tape, emulating designs found carved on ancient stones in Ireland, and used as well in the costumes of lively Irish step-dancers.

And...Hawaiian and Tivaevae  (Cook Island) traditions, both in the South Seas.  It is believed quilting arrived in this area with missionaries, bearing Western cotton fabrics, in the 1820s.  However, according to The Quilted Planet (Celia Eddy, Octopus Publishing Group, UK, 2005), prior to the arrival of cotton, "an ancient method of producing cloth involved stripping a sapling of its outer bark, then soaking and beating the bark to make a strong and flexible fabric.  The resulting material, called 'tapa' cloth, was then elaborately decorated and patterned by stencilling."  It comes as no surprise to me then, that the patterns used in Hawaii and the Cook Islands in their cotton quilts are stencil-like in form.

My task now is to work out in my sketchbook an expression of one of my favourite styles.  For this exercise I've chosen the Hawaiian, and have created a stamp using a pattern of the Naupaka flower which I found at Martha Stewart.com, of all places! Once I finish my sketchbook study, I'll post here again with a photo or two.  Stay tuned!

P.S. This post is linked to WIP Wednesday on the all-Canadian Needle and Thread Network.  :-)
Posted by Margaret at 5:49 pm

Hi!
Great post! Fascinating history and information. I like your selection of the Hawaiian Naupaka flower too. I'm a little behind on my artquilt and SAQA list reading and might never catch up ... but ... I'll be laughing all day with the image of dead rabbits hanging from trees. Hilarious ... YES! Art ... well, to each his own! LOL! Thanks for sharing just how wild some ideas can be, how far removed from most of the concepts associated with a creative process of any kind!
Susan

Well, you learn something new everyday. Thanks.