What Was I Thinking?


Two houses south of mine, a stray found a place in which to have a litter of six -- count 'em! -- kittens.  Three are ginger tabbies (think: Garfield), one is a tortoise-shell tabby, one is a real hodgepodge -- mainly tortie but with an orange streak down its nose from forehead to chin and a single orange paw (left front) -- and one (the only one unclaimed) is a little mainly-grey calico with some orange and white -- very subtle -- here and there.

Oh dear.  All of the others would be picked up by Friday.  All have been essentially weaned and definitely litter-trained.  This one had no home, and the neighbour is a known...um...rather reclusive bachelor with a fondness for drink.  It's his across-the-road neighbour, May, who has really been helping him with the kittens and finding them homes.

I'd always said I wouldn't get another cat while I had Diesel; I didn't think he'd allow it (he's somewhere in age between 10 and 11 and I've had him almost 4 years).  However, when I said that, I wasn't really thinking about a kitten.  And this one's female (though she'll be spayed when the time is right).  So...although I'm smitten, I sensibly told May, "I'll try it for 48 hours".

When we got in the house, I put her down, and immediately began to refer to her as "Pookie".  I think it's because she's so tiny (I haven't cared for anything so small in years; even my very-tiny babies were larger!), and she kept wanting to poke her nose into everything.

I let her wander around while I made my lunch and sorted the clean, dry laundry.

Eventually, I heard a loud hiss; Pookie had found Diesel in his hither-to secret snoozing spot under my sewing table, back in the southeast corner of my studio.  When I went to investigate, he was growling, and she was trying on her best Offended Large Cat imitation.  When I put her out of the way and reached to pat and assure Diesel, he didn't snap, but his low, deep growl told me he had nothing good to say about the situation.  I took Pookie out of the room and left Diesel alone.

When he finally deigned to stroll into the kitchen, he made a bee-line for the back door, glaring at me and growling the entire way.  I let him out and shortly thereafter followed, Pookie in hand.  I put her down a couple of feet away from him.  Neither was pleased.  I then put Pookie back in the house and, despite her plaintive kitten wailing, went to spend a bit of time with Diesel.  He put up with my ministrations, but continued to growl low in his throat.  Eventually he got up and walked away, leaving me wondering if I'll ever see him again.

Meanwhile, Pookie has demanded all sorts of attention, meaning I had to do everything with one hand much of the time.  Finally she stopped moving long enough for me to take a few photos (and several that weren't worth keeping!) 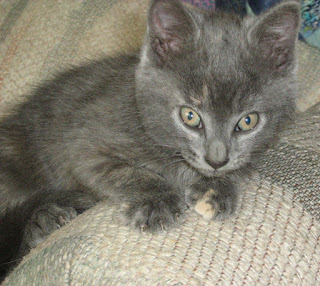 She's gone back to sleep; I'm going to slip outside with my spinning wheel and a cup of coffee, and hope that Diesel comes back.

What am I thinking?!
Posted by Margaret at 2:02 pm

Email ThisBlogThis!Share to TwitterShare to FacebookShare to Pinterest
Labels: kitten

I don't know what you were THINKING, but you seem to have been DOING a compassionate, heartfelt, LOVING thing. She is very cute. Diesel will probably learn to coexist peaceably, I hope.

Taking in a new kitten!! I hope that by now Diesel has relented and come home for some treats...
Our new kittens are settling in very well, but have not met THE DOG face to face yet. We have the baby gate up and they are aware of each other's presence. The larger, and more adventuresome, male has walked up to the rabbit enclosure and given that poor innocent geriatric a few hisses. We let the kittens upstairs while the dog is out - this will spread their scent throughout Portia's domain. In about a week we will let them have a first encounter.