WIP Wednesday of a Different Sort

Today I spent little time in the studio, despite best intentions.  I had two friends who needed computer help.  I'll spare you the details, but it took about 2 hours each to sort them out.  In between, this was my Work In Progress: 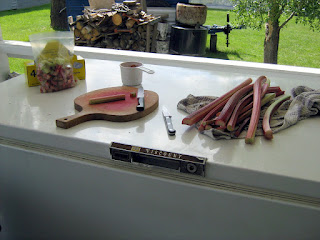 Rhubarb.  Yep.  And what you see above is but a fraction of the original stack.  By the time I took this photo, I'd already put 12 cups (count 'em!) into my slow cooker with sugar and water for stewed rhubarb...mmmmmm....and had given away another 24 stalks to my next-door neighbours.  They already grow rhubarb -- as do I -- but our plants pale in comparison to that of our across-the-alley neighbour, Dave.  He's a bachelor, and works long hours, so I have been blessed with his bounty -- rhubarb, asparagus, apple-crabs...as long as I share a wee bit (emphasis on the wee because he's home so little that he rarely cooks or eats there), I can help myself.

You might wonder why he has such a large garden.  Well...it was an inheritance.  He's living in what was his parents' home, and has spent the last 4 summers (or longer) working to clear and clean up their long-neglected and over-grown garden.  Thus, since my first summer here (2009), I have been the beneficiary of


Once in a while when he is home, we compare notes on garden progress and tour our respective yards together.  I preserve the produce, and share the results.  It's all good, and everyone benefits.

And in the Studio...

Lest you think I've been slacking totally, Monday I finished this:

And I spent some time sampling trapunto, using the method described by Philippa Naylor in her episode on The Quilt Show (sorry; I think you have to be a subscriber to actually watch this program). I'm working on a piece entitled "I Was Hungry" (mentioned here long ago) and want to use it in the background.  It proved a challenge using white-on-white for the sample (very bright and therefore hard to quilt), so I'm hoping the fact that the actual piece has a dark background, will make the process much easier in the end.  Nonetheless, I'm thrilled with the results!

First off, you can see from the photos below that I used a lively print for the front of my sample.  This is not recommended, and I soon learned why: the trapunto doesn't show up very well -- at least, not before it's quilted.

Photo #1 - I've stitched around my chosen design -- just inside the drawing lines, made with a fine mechanical pencil (dont't faint! It's what Philippa uses) -- using wash-away thread in the needle (I selected Wash-A-Way (TM) by YLI, one of Philippa's favourites), fine white cotton thread in the bobbin, and 2 layers of scrap batting (it's only a sample): 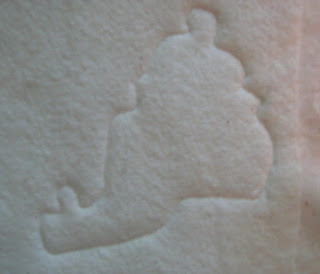 Next, I trimmed the batting in 2 gradients -- the top layer first; the bottom layer second -- and a bit farther out, using my favourite sharp, fine scissors: 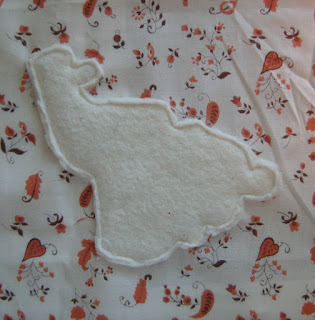 Then I layered it with more batting and a backing (simple white cotton).  First I stitched on the drawn lines to outline the scene; then I quilted close to the motif, using -- in this case -- 'pebbles'.  This is what it looks like from the back: 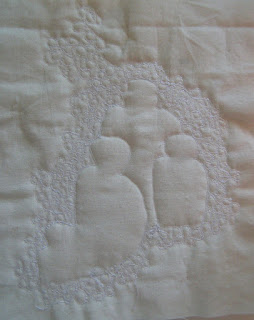 And this is what it looks like from the front.  See what I mean about the disadvantages of a print? 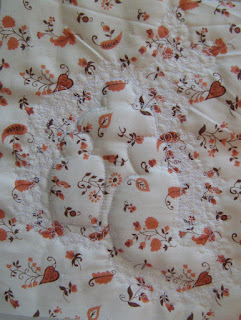 Still, you can sorta see the effect.  I think it will work well on my piece, which sports a much more subtle fabric.  Stay tuned!

Oh! I am green with envy! Rhubarb, asparagus, rhubarb, rhubarb, rhubarb... I may just dream of it tonight! and asparagus -- I have never had such lovely asparagus as what my father grew and nurtured on our farm in Manitoba... store bought of either is just not nearly the same as home grown....

I love your garden tidbits! I LOVE, LOVE, LOVE rhubarb but have no rhubarb plants so rely on my bestest to give me some....I can't believe that they sell it at the market....;)...I love your trapunto and I am eager to give it a go...Yes, the effect is very nice...gotta try it. I do subscribe to the show so I will check it out.

mmmm
p.s. Hot Rhubarb Sundae! That's what we do...
Monika

Yes to rhubarb - just had rhubarb cake for breakfast (made with nutritious flours). Thanks for showing these details of your trapunto work, very interesting.