I'm back in the classroom studio with my City & Guilds work, Module 7 now.  This module focusses on applique techniques of all kinds, beginning with 'bonded' or 'fused' applique design.  We're to re-visit our sketchbooks for intriguing shapes, creating templates in different sizes, and then auditioning shapes, fabrics and lay-outs for a fabric collage. 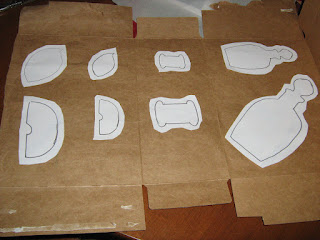 Here are my shapes, glued to light-weight cardboard (the back of a case used for cans of 'fake beer' -- the name my late hubby gave to my favourite soft drink, non-alcoholic beer).  I have 2 sizes of each of four shapes -- a leaf, a spool, a bottle with stopper, and a semi-circle that's really half a large washer I found on a road some time last year while out walking.  I've since found some full circles too.  Wonderfully heavy for tracing and using for sun-dyeing etc. -- but I digress.  :-) 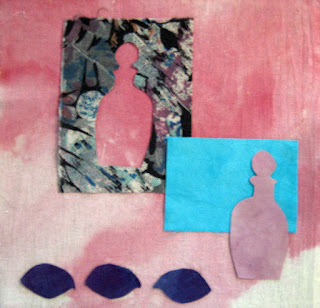 This is the first composition I sent to Linda -- nothing fused, just placed.  All fabrics except the print are my own hand-dyes.  The print is just a wee piece of a large one given me by a friend who had a friend who was 'de-cluttering'.  (I never turn down donated fabric.  I can always find a use or another home for it!)  I wasn't sure about the pale pink version of the bottle on the right; I really liked the rest though.

Linda picked up on the leaf shapes, and suggested I do more with them, so I've just sent her this version, which I like much better: 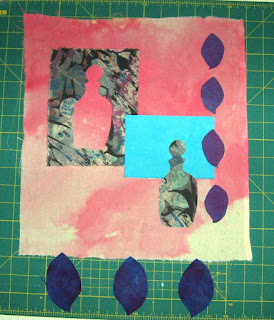 (Pardon the cutting mat in the background!)  I realized the first version was 'nice', but not particularly ambitious.  This second version, I think, has more potential. You'll see I switched out the pale pink bottle for a print version (from whence came the negative shape on the upper left).  The larger leaf shapes at the bottom, in a finished piece, would actually dangle, perhaps from a pointed edge treatment (faced).  The quilting and applique stitches would deliberately unify the whole, suggesting stems and veins on the leaves, and echoing the curves in the shapes of both the bottle and the leaf motifs.

For now, however, I have some other things going for the weekend, including a 50th Wedding Anniversary party for my friend B and her husband N (my cribbage buddies), and some time in my step-sis' garden at her cottage, weeding.  As for the collage, I'll be sitting with the design, and come back to it Monday or Tuesday with fresh eyes.

Oh...and I finished the beading on Block 19 for both Take A Stitch on (a) Tuesday (TAST) and the Crazy Quilt Journal Project (CQJP) -- I've submitted it for my June contribution.  Here it is in all its glittery glory:

Oh, and knitting?  Yes, there's some of that too.  Having enjoyed the soothing qualities of garter stitch for the past few months (the Dr. Who Scarf project), and having been given a shopping-bag-full of delightful, light-weight tweedy Patons Venus yarn in a yummy royal blue, I cast about for a simple cardigan for m'self.  I found the perfect pattern in Knitty's Spring-Summer 2011 edition -- the Corinne Cardigan.  It's a delightful knit based on a repeating short-row sequence, knit all-of-a-piece from side to side, and I was doing well till I split off for my first (the Left) sleeve.  Suddenly I wasn't all that certain I was going in the right direction.  I've found a helpful knitter on Ravelry who ran into a similar problem, and she's walking me through this tough patch.  Once I'm on track and have enough knit to show it off, I'll post a photo.  Promise!

I love the 'redo' of the applique, Margaret. Really appeals to me and you have unified the piece. And, the beading really adds to the block. Have a fun weekend!
Judy

I definitely like the second composition-what fun! Your stitching on the TAST is just gorgeous.