I mentioned that a Selection from the Cheongiu Exhibit was coming to Lacombe for a brief display at the Lacombe Memorial Centre (aka the LMC).  It came, it displayed, and it left.  Its whereabouts was so little mentioned that when I wanted to view it, at first I couldn't find it.  Fortunately, a couple of days before it was to be taken down, I did.

The original exhibit was created in 2009 for the Cheongiu International Craft Biennial in South Korea, held between September 23 and November 1 of that year, when Canada was the guest artist.  Of the 200 Canadian craft artists in that show, a selection of the work of Alberta artists was made for the tour through the province that made a stop in Lacombe.  Each piece was exquisite; I took photos of my favourites.

The first is a quilted piece by Mary Sullivan Holdgrafer, textile artist and, with her husband Gary, creativity coach.  The quilting on it is very dense -- a tiny 'meshwork' of squares that perfectly complements the construction and design.  Ms. Sullivan began her quilting journey while recovering from breast cancer.  Her current focus -- she wrote in her Artist's Statement -- is the exploration of  "...how joy and grief intermingle at the end of life."

The second -- a copper bowl with a touch of 14K gold -- is my very favourite piece, reminding me as it does of  my tutor, Linda Kemshall, with her fondness for ravens, rooks and crows, and of Jude Hill, with her fondness for feathers.  I can't find much about the artist, Ms. Harse, on the Internet, save that she resides in Southern Alberta.  In her Artist's Statement, she said she derives inspiration from her locale -- very near the Canadian Rockies -- and "...the ravens [which] inhabit the skies" in the foothills. 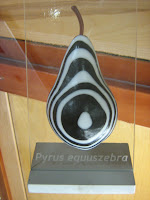 Next up -- a collection of wonderful glass pears created by James Lavoie of Edmonton.  I wanted to take them all home with me!  Each pear has been given Latin nomenclature -- the artist's intention being "...to poke fun at the academics of nature and the nature of academics" -- as you can see in the example of Pyrus equuszebra (right).  The collection also reminded me of my dear friend, Jeannette Douglas, who, aside from being an internationally-known designer and teacher of embroidery, is a collector of pears in all shapes and sizes.

The last I'll share here is another tongue-in-cheek design from Linda Chow, a jeweller and sculptor who works not only with metal but also with horn and bone, and who, she writes, likes to "...take the viewer aside for a moment to see the lighter side of things, yet containing a serious message."  Currently, she adds, she is exploring Alberta history and, in particular, the little churches and mosques that dot the prairie landscape.  She writes that she sees them as "... centripetal forces pulling together people of diverse races, sexual orientation and nationalities." -- and this is reflected in the piece pictured at the left.  Can you catch her message?  :-)

What a lovely collection of work...glad you found it and shared with us!